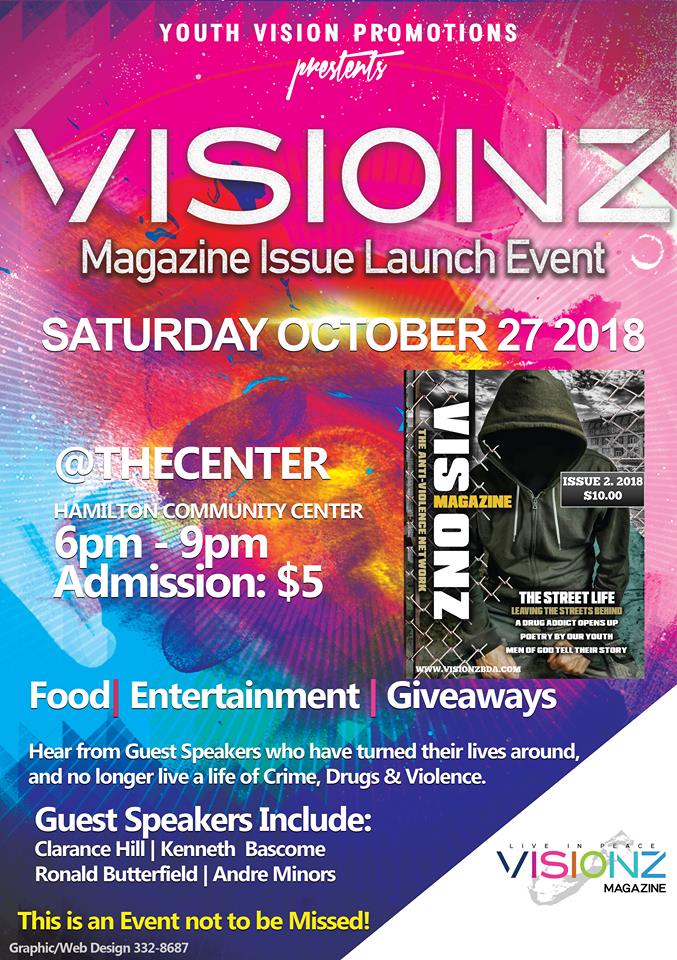 YouthVision Promotions are gearing up for their next big community event marking the next Visionz Magazine Launch on Saturday, October 27.

The event, to be held from 6pm to 9pm at the Hamilton Youth Centre, where members of the community are invited to come out and hear firsthand what Bermuda’s only Olympic Bronze medalist, Clarence Hill has to say on plans, or the lack thereof, by government to facilitate a gym to train young boxing enthusiasts.

There will be entertainment, give-aways with food and clothing by local entrepreneurs as well.

The next magazine, entitled ‘The Street Lite’ features a number of firsthand accounts by “people who have been  involved in and affected by the activities that come with living the street life, from drugs to murder”.

A number of young poets will also be on hand to showcase their craft, including senior school students, in addition to a “x-word puzzle that features the English Premier League football clubs”.

Spokesman Desmond Crockwell said: “This is a must have Magazine.

“Everyone is invited to attend, and we are making a special call to our community workers both current and former, as they are the ‘relationship-builders’ who can help.
“We believe that our angry, aggressive, violent young people can be helped,” he said.
“There are people on this island that they do listen to. There is an old teacher, football/cricket coach, a neighbour, friends, parents, a business owner who has the respect of even the worst of ‘gangsters’.
“And we are calling on all of us to come together to network at this particular event” said Mr Crockwell.
“If you can/want to help our angry young people, then this is the place to be.”
For more information, call 337-7786.

DPT Kiosk at City Terminal Will Be Closed All Day Sunday, February 25