The Supreme Court trial of the man charged with killing a woman here from New Zealand for the America’s Cup, by driving his boat dangerously; was rescheduled today, due to witness availability.

Andrew Lake, 27, of Southampton will now stand trial before a judge and jury of his peers, on August 13.

The defendant denies the manslaughter of Mary McKee, 62, who died as a result of the marine accident that occurred at night in Hamilton Harbour, near the Ferry Terminal on June 1, 2017.

He also denies causing injuries to Mrs McKee’s husband, Arthur, and another man, Charlie Watson, by driving his powerboat in a dangerous manner.

The defendant, whose bail was extended, was represented by Queens Counsel Jerome Lynch. 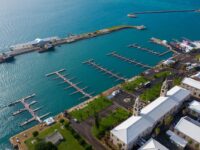