News Release: Hamilton, Bermuda (May 10, 2019) — The 69th Argo Group Gold Cup advanced to the semifinal round with Ian Williams of the UK and Johnie Berntsson of Sweden moving to match point in their respective matches. Williams opened a 2-0 lead over Lucy Macgregor of the UK in one match and Berntsson leads Harry Price of Australia by the same score.

The penultimate round of the $100,000 match racing regatta hosted by the Royal Bermuda Yacht Club began after some exciting racing earlier in the day. In the quarterfinal round Price scored the upset of the regatta by beating his countryman, Torvar Mirsky, 3-2.

Mirsky raised eyebrows yesterday when he chose to race Price, the world No 3-ranked skipper and a past Youth match racing world champion in the quartefinals. Common theory would’ve suggested Mirsky, as the No 2 seed, pick a crew from the repechage round. But Mirsky reasoned that the repechage skippers were more practiced because they had sailed seven extra races. Last year, Mirsky advanced to the semifinals through the repechage round. But the gamble didn’t pay off.

“His motives were right, we’re the least experienced team out of everyone,” said the 23-year-old Price. “Obviously, we’re very pleased to get through to the semis. We had the toughest match out of the entire group, having to race Torvar, but we just took it one at a time. We won the first, lost the next two, then won the final two.” 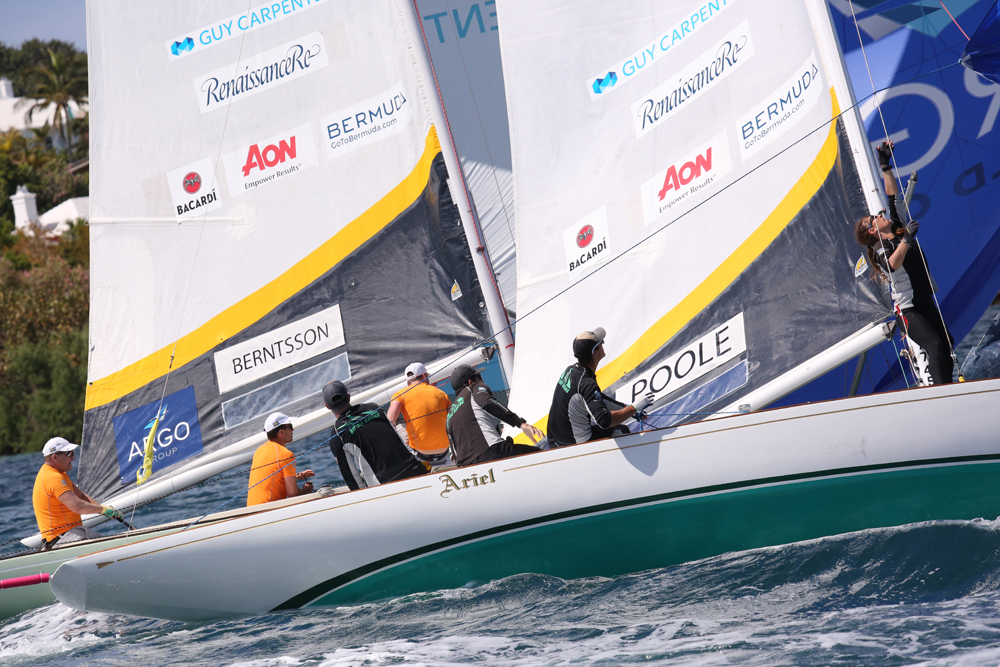 Johnie Berntsson and Chris Poole had many close encounters in their quarterfinal match, but Berntsson prevailed, 3-0, at the Argo Group Gold Cup (©Charles Anderson photo)

The final race was as tough as you’d expect, for the first lap at least. The two crews sailed to the right side of the course off the start line. Later up the leg and approaching the windward mark Mirsky held starboard with Price approaching on port.

As the two approached Mirsky used the right-of-way to dial down Price and force him to take his transom. Mirsky continue to the port layline and tacked, while Price tacked to starboard on the opposite layline.

When they met at the windward mark, Price was able to tack around the mark inside of Mirsky in a move seen frequently this week. Price then luffed Mirsky to gain some breathing room.

“It got a bit congested halfway up the beat up against the shoreline near the hotels,” Price said. “It was pretty much a carbon copy of the race before, except opposite positions with the dial down.

“We were lucky we got inside at the top mark,” Price said. “We thought we needed more time to set up because we’d just come in and tacked at the top mark. So, we gave him a luff to slow him down and the race was history from there, really.”

Price slowly pulled away on the downwind leg and the two crews took opposite ends of the leeward gate, Price around the left mark and Mirksy around the right. The two crews sailed out to the right side and when they first crossed on the leg Price was comfortably ahead. Price rounded the windward mark with an approximately 25-second lead and sailed the run without incident to win the match.

“This is the second time he has picked us in a similar situation and we’ve beaten him both times,” said Price. “I think he’s learned his lesson.”

Berntsson advanced to race Price by beating Chris Poole of the U.S., 3-0. “The score doesn’t reflect the closeness of the racing,” Berntsson said. “There were lead changes and Chris did a good job to keep us on the ropes. In the first race we stretched away, but the other two were close racing.”

With the match on the line Berntsson started early and as he turned back to restart an extension of his boat hit Poole amidships. The on-water umpires gave Poole a penalty for failing to keep clear, a decision that left him scratching his head.

“I didn’t think he had any rights since he hadn’t started properly,” said Poole. “But I guess the lesson is to not put it in the hands of the umpires.”

As Berntsson restarted Poole sailed away to a sizeable lead of about five boatlengths at the windward mark. But Berntsson slowly chipped away and when they got to the windward mark the second time Poole tried to offset his penalty by luring Berntsson into a windward/leeward trap. Berntsson’s experience saw the trap developing and he was able to avoid trouble.

“He tried to lure us into a trap but we initiated to bear away and fooled him,” said Berntsson. “He was a bit surprised, I think, and then we passed him downwind. We’ve been through these situations before. They needed to try something to get a score.” 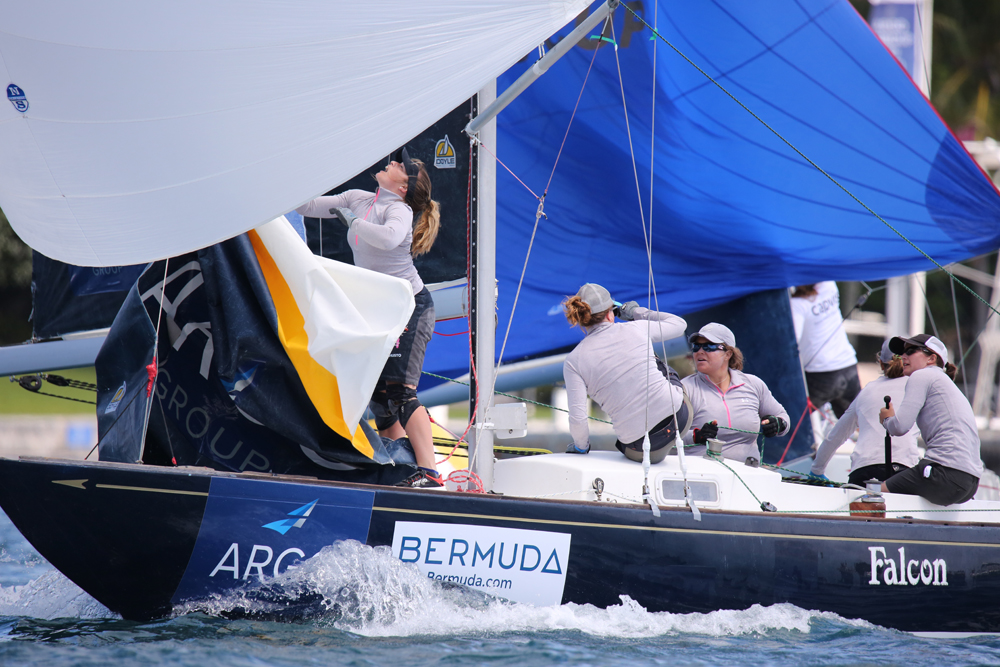 Williams advanced to the semis after beating Ettore Botticini of Italy, 3-1, and Macgregor advanced after dispatching Eric Monnin of Switzerland, 3-0. Macgregor and her crew led at every mark round and won every race they sailed against Monnin this week, five in total.

Racing resumes tomorrow at 1000 hours with the completion of the semifinal round. The winner of each match will be the first to score 3 points. The final and petite final will be conducted in the afternoon, not before 1300 hours.

Body Of Cricket Great Shane Warne Arrives Back In Australia