The Guardian: Monday, July 13, 2020 – The maverick that is Jermaine Blackwood drove West Indies to a famous victory; he also flicked and cut impishly in pursuit of the 200 runs that were required while hitting a magnificent 95. As a consequence Jason Holder’s tenacious team, who seem to be bonded ever closer by the lockdown experience rather than driven to distraction, prevailed by four wickets in a game that got better and better as the days went by.

For those following from afar the intensity and commitment of the players of both sides made for a fine contest. Given the weirdness of the preparations there were bound to be aberrations, caused by rustiness along the way. Yet the event was a clear success for the England and Wales Cricket Board, notwithstanding the outcome.

How West Indies deserved their win; they were resolute, disciplined and skilful throughout. We knew they could bowl but their batsmen came up with the goods under pressure, with Blackwood a surprising hero. In the tourists’ first innings he had been the sole batsman to give his wicket away wantonly, when he cracked a drive against Dom Bess straight to mid-off.

That was the Blackwood of old, the 28-year-old Jamaican who so often exasperates. This was his 29th Test match and he has already been dropped six times. He may have been the last choice here. Should they play him or the off-spinner Rahkeem Cornwall? Well, despite the profligate dismissal in the first innings, they made the right choice and he will not be dropped for Old Trafford.

He was dropped on Sunday afternoon, however, by England cricketers who had a nightmarish half-hour after lunch, when a few chances from Blackwood’s bat went begging. The size of the target meant there was no room for such errors, a notion that was supported by the startling fact that the West Indies have now been set targets of 200 or less on 61 occasions in Test cricket, winning 55 times and drawing six.

The chances were all tricky. Jos Buttler spilt a catch down the leg side off Ben Stokes, which he would expect to take, when Blackwood was on 20. Rory Burns failed to see a ball flying past him in the gully and when Bess was bowling Stokes himself anticipated at slip – in the wrong direction. There was also an opportunity for a run-out spurned by Zak Crawley.

England were heavily dependent upon Jofra Archer, the likeliest source of a last-day victory. He bowled with venom, taking two early wickets to raise home hopes and before that he batted better than ever before in an England shirt. He scored only 23 but after the departure of Mark Wood he may have felt stranded. Shannon Gabriel took the final two wickets, to end with five in the innings and nine in the match. 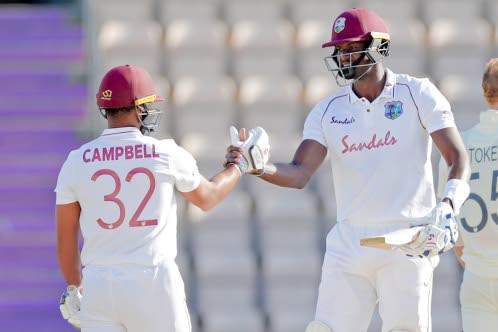 The lead of 199 looked as if it might be enough after Archer’s first spell. His first delivery to John Campbell struck the foot of the batsman, who limped off soon afterwards. Then Archer dispatched Kraigg Brathwaite and Shamarh Brooks in consecutive overs with full-length deliveries, the former bowled off the inside edge, the latter nowhere near making contact with the ball and palpably lbw.

Next Wood bowled Shai Hope via the batsman’s back leg to leave West Indies ailing at 27 for three with one injured batsman staring dolefully at his toe. But for the second time in the match Roston Chase was calmly adhesive while Blackwood was displaying far more discretion than in the first innings yet never ignoring any scoring opportunities.

Stokes shuffled his bowlers – if anything he may have been a little reluctant to bowl himself. He tried Bess early and he bowled pretty well but this was never the raging turner on the final day that England seemed to be anticipating; moreover, the ball spinning away from the bat tends to be more dangerous at this stage of the game. Bess had two promising lbw shouts declined by an umpire’s review verdict.

The West Indies pair had added 73 when Archer produced the perfect lifter for Chase, who could only parry and watch the ball’s gentle parabola into Buttler’s gloves. Shane Dowrich was peppered and uncomfortable but he hung on for 17 overs alongside Blackwood. Then he was caught at slip off a Stokes no-ball (amazingly the bowler did not celebrate, sensing that he was a few millimetres over the line). The next ball was legal and Dowrich edged that one as well, this time into Buttler’s gloves.

Thirty-two runs were still needed. Stokes had the ball in his hand and it was just starting to swing. The West Indian jitters were evident from two scrambled, chaotic singles as Blackwood and Holder did their Joel Garner/Gus Logie impressions. Stokes kept rushing in; eventually Jason Holder middled a pull shot; a few more scampered singles and then Blackwood was caught at mid-off again, five short of his hundred. But no one was castigating him this time.

There were no more dramas. At the end two grand, gallant captains punched hands. Who cares who is the best? Let us enjoy their contests in the next two matches. West Indies had won a gripping game of cricket and for a while we had all forgotten about the virus.

Body Of Cricket Great Shane Warne Arrives Back In Australia