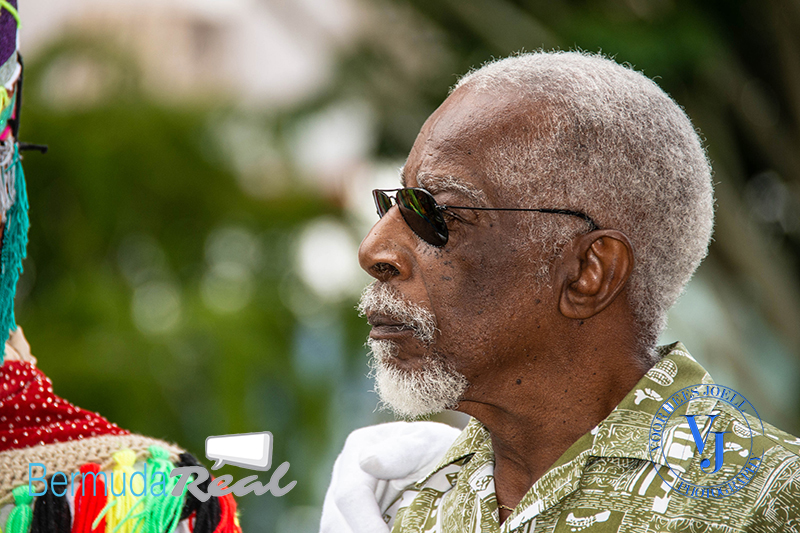 Veteran Gombey dancer Leon ‘Sparky’ Place, a former dancer and drummer with the island’s Place’s Gombeys was honoured this week at the launch of the 2018 Bermuda Gombey Festival Showcase.

The event, designed to celebrate Bermuda’s iconic gombey troupes gathered at Victoria Park in Hamilton to pay homage to the island’s iconic dancers, including traditional dancers from overseas.

Ms Foggo gave special recognition to Mr Place, who was recruited into the troupe when he was ten-years-old with his brothers, Dennis and Reginald Jr.

“He had little choice in the matter — his father, known as ‘Scranny’, was the group’s founder and captain, and Gombey was a family affair.” Mr Place succeeded his brother Dennis as captain in the late 1970s,” said Ms Foggo.

She also noted that Mr Place was a disciplined mentor for younger dancers and was “exceptionally creative”, in that he added more than ten original steps to the troupe’s repertoire.

“Perhaps his most enduring contribution to the art is as a master costume designer,” she added.

Ms Foggo explained that Mr Place had pioneered the use of wool fringes on the Gombey regalia.

She noted that the annual festival was set up to showcase the contribution of folk dancers who represent a tradition “passed down the ages, from generations of master Gombey dancers”.

She was speaking as Zayd Saleen, from St Croix in the US Virgin Islands, walked through Victoria Park on stilts, symbolising the islands’ Moko Jumbies’ towering role as protectors.