Jamaica Observer: MONTEGO BAY, St James, By Horace Hines — The health department has given the owner of the property that houses Pathways International Kingdom Restoration Ministries 24 hours to clean up the filthy, stench-ridden location now infamous as the place where two of its members were killed in an alleged human sacrifice ritual, and a third shot dead after reportedly attacking the police. The deadline expires at 1:00 pm today.

Steps have also been taken to ensure that if the owner fails to comply, and the State has to act, it can recoup funds spent in removing the garbage and solid waste now strewn across the property. 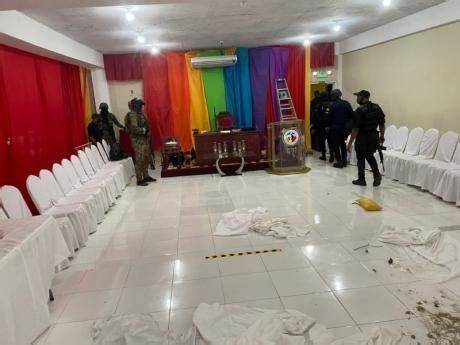 Health officials yesterday declined to identify the property owner, but that individual has also been given 24 hours to remedy a mosquito infestation there.

A team from the St James Health Department visited the Albion, St James, location yesterday in response to complaints of an unbearable stench emanating from it.

“We found numerous nuisances. There was a heavy infestation of pests, rodents, roaches, flies, maggots, based on food that would have broken down. [There was a] severe odour nuisance on entering the property. This would have been from the breaking down of chicken and other products that… spoiled,” Lennox Wallace, parish manager of the St James Public Health Services, told reporters after his team returned from the scene.

“After the inspection, the officers… prepared a notice and served it on the owner of the property,” he added.

His team noted that, in addition to the rotting food, uncontained human waste was present at the property, said Wallace.

Supplies of food were found in the building on October 17 after the police entered to prevent further killings. The foods were largely provided by followers of Pathways’ cult leader Kevin Smith who had told them to purchase supplies in preparation for coming disaster.

A team from the St James Municipal Corporation will also visit the property this weekend, he added, to address any issues not attended to by the owner.

“We… also contacted the local board of health and the St James Municipal Corporation. They [will be] going to that property over the weekend to eliminate some of what we would have seen and to put a caveat on that property so they can collect funds that they would have spent to have some of that nuisance abated,” Wallace explained.

“If the 24-hour notice we served is not obeyed, we want to ensure that we have a plan B where we can eliminate those nuisances, but that the owners of the property will have to repay for expenses,” he added.

The goal, he said, is to ensure that residents of the community “can live in peace” and not suffer any adverse effects as a result of the conditions at Pathways. He also encouraged them to report any further concerns.

“As long as it is a public health [issue] we will deal with it immediately. We intend to make the parish as safe as possible, as far as public health is concerned,” Wallace assured.

Looters, curiosity seekers, and the media have had free run of the unsecured building for the past few days.

The police made their last visit to the building on Monday and, as it is no longer a crime scene, they have no further interest in it.

Also on Monday, the controversial Pathways leader Smith died as a result of injuries sustained during a three-vehicle car crash on the Linstead bypass in St Catherine as he was being transported by the police from Montego Bay to Kingston. He was on the verge of being charged with two counts of murder, two counts of wounding with intent, and illegal possession of firearm in relation to the vicious killings of 39-year-old Taneka Gardner and 38-year-old Michael Scottsdale Brown, both of St James, inside the building on October 17, 2021.

Smith’s co-accused, Andre Ruddock, is scheduled to return to court on November 3 to answer to one count each of murder and wounding with intent.