The “deadly Category 5 hurricane devastated Dominica, the US Virgin Islands, and Puerto Rico in September 2017” and is still regarded as “the worst natural disaster in recorded history to affect those islands”.

According to the US National Weather Service, Dorian is expected to pass through the eastern Caribbean Sea today (August 27).

Meanwhile, forecasters at the National Hurricane Center (NHC) say the storm is expected to be a “low-grade Category 1 hurricane by the time it reaches Puerto Rico”.

According to the latest reports, Dorian’s five-day forecast cone now reaches South Florida as the storm heads for Puerto Rico.

As of 8am this morning, Dorian was located about 15 miles southeast of St Lucia or roughly 1,500 miles from South Florida, with maximum sustained winds of 5 mph, moving northwest at 13 mph.

According to the NHC, the storm is forecast to have winds “close to, but below, hurricane strength during the next five days”.

On its present course, Dorian is forecast to “move across the eastern and northeastern Caribbean Sea during the next few days, passing near or south of Puerto Rico on Wednesday, move near or over eastern Hispaniola Wednesday night, and move north of Hispaniola on Thursday”.

The storm is also expected to “strike or pass very close to the Dominican Republic with winds at or near 70 mph. 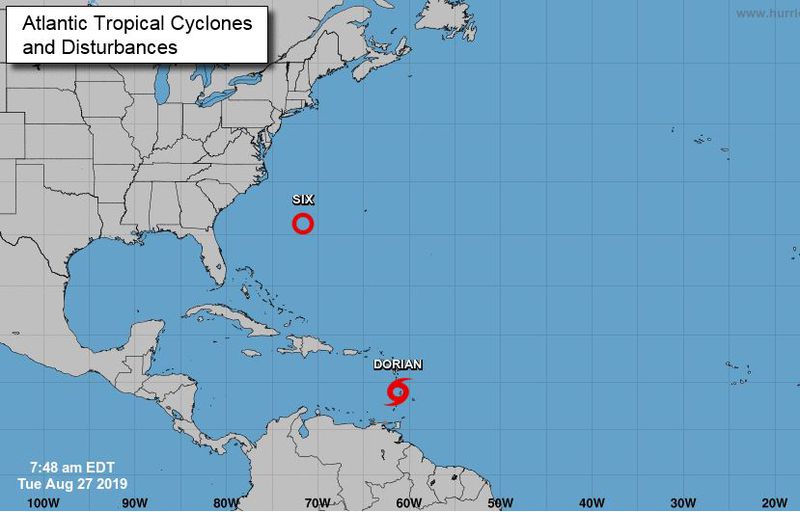 And in the midst of it all, the NHC said today: “Tropical Depression Six has formed about 365 miles southeast of Cape Hatteras, NC, with maximum sustained winds of 35 mph.

“But while the depression is expected to strengthen to a tropical storm on Monday night or Tuesday, it was far enough out in the water to pose no threat to the United States.”

Meanwhile, the Bermuda Weather Service (BWS) said today Tropical Depression Six is a “potential threat to Bermuda”, with its closest point of approach to Bermuda within 72 hrs forecast to be 344 nm to the WNW at 6pm on Wednesday.

BWS forecasters say “this system may move closer to Bermuda after this time period depending upon its track”.

Puerto Rico’s Governor, Wanda Vázquez signed the executive order declaring a state of emergency on Monday and “provided a list of all the new equipment that public agencies have bought since Hurricane Maria”.

“I want everyone to feel calm,” she said. “Agency directors have prepared for the last two years. The experience of Maria has been a great lesson for everyone.” 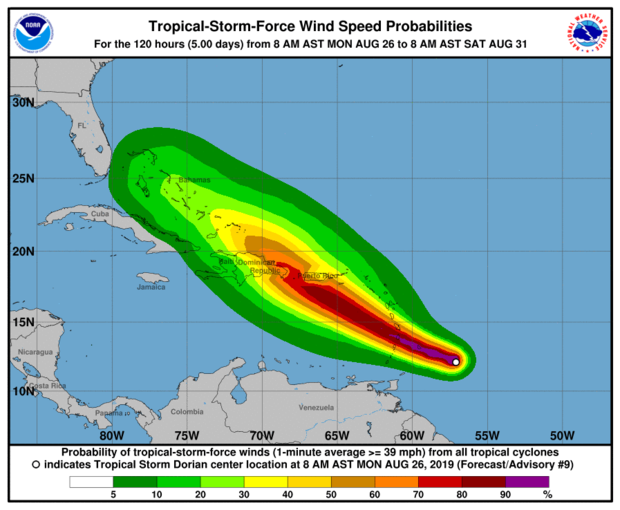 Public schools will close this afternoon and at least one cruise ship has cancelled its trip to Puerto Rico, where some 30,000 homes “still have blue tarps as roofs and the electrical grid remains fragile and prone to outages even during brief rain showers”.

Officials in St Lucia also shut down virtually “everything on the island of nearly 179,000 people” on Monday. Dorian was expected to hit that region around 2am this morning.

Dorian is expected to pass through the Leeward and Windward Islands this morning and forecast to intensify after it passes the Windward Island and moves into the Caribbean Sea.

“The storm is still forecast to be a hurricane as it approaches Puerto Rico and the Dominican Republic on Wednesday and Thursday”, heading towards the Bahamas and possibly “southeastern parts” of the US mainland, including Florida.
As of 8am this morning Dorian lost some strength after crossing Barbados, moving WNW at 13 mph.
Hurricane Hunters found the system “not to be as organized as shown in the satellite” on Monday. And while the forecast is still “very uncertain, there is the potential for some impact in Florida”.
But that depends on how disrupted the system is once it crosses the Caribbean.
The NHC also noted that we are in the peak of hurricane season in the Atlantic.
“Two-thirds of all the storms produced in a typical season occur during this period. That’s because conditions in the tropics become ideal for storm development.
“By the end of August, water has typically warmed to the mid-80s in many parts of the region.”