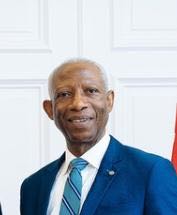 Tributes and condolences poured in today following the death of Dr Leonard Teye-Botchway, a Ghanaian-born surgeon who died at the age of 64.

Dr Teye-Botchway, a father of three, moved to Bermuda in 1994 with his wife Ronita, to practice ophthalmology as the medical director of the Bermuda International Institute of Opthalmology.

During his career, he also became Bermuda’s first honorary consul for Ghana in January 2011.

The former Olympic team member for Ghana in the 1970s, Dr Teye-Botchway also became a West African champion in 400 metres and competed in a host of marathons, including the Bermuda Day Half Marathon Derby.

He was also instrumental in the establishment of the Eye Institute Classic 5K and worked as an assessor for Paralypian athletes as well.

Medical colleagues, employees, and a host of relatives and friends were shocked to hear of his passing.

Premier David Burt today extended condolences to the family of the late Dr Teye-Botchway, who he described as “a popular eye surgeon”, who “served as the first-ever honorary consul for Ghana in Bermuda”.

“He was appointed to this role in 2011, the first time that an honorary consul had been appointed in Bermuda for any African country,” said Mr Burt.

“Only recently I had the pleasure of hosting him and the Ghanaian High Commissioner to London for talks during the High Commissioner’s visit to Bermuda. His untimely passing comes as a tremendous shock.

“On behalf of the Government and people of Bermuda I wish to express sincere condolences to his wife, three sons and entire family.”

Condolences were sent yesterday by the High Commission of the Republic of Ghana, describing Dr Teye-Botchway as “dedicated and indefatigable” on behalf of the President of Ghana, the Foreign Minister, the Government and the people of Ghana to his family.