Minister of Transport & Regulatory Affairs, Walter Roban recently toured the Department of Marine and Ports, with the department’s Director Captain Rudy Cann and the Department of Public Transportation’s bus garage, to get a firsthand look at the services in progress.

Since his recent appointment, a spokesman said Mr Roban “is actively continuing a tour of meetings with individuals and organizations under the remit of his Ministry”.

“As the Minister seeks to become informed about all of the ongoing programmes under his Ministry, he has engaged in meetings that span the various aspects of his portfolio, including discussions with department directors, vendors and those with special interests, such as environmentalists,” the spokesman said.

“The meetings include those in which he is pictured here with Department of Public Transportation (DPT) officials, including Director Stephen Outerbridge, as he consider the state of the public bus system.

“Similar meetings were held with staff at the Department of Marine and Ports Services, including Director Captain Rudy Cann.” 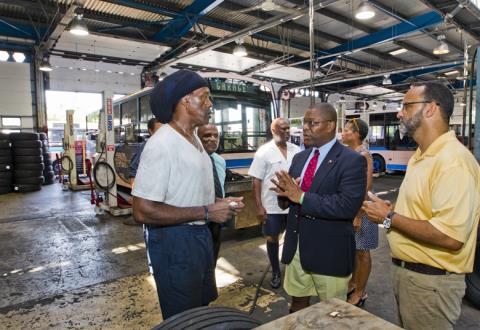 The Minister said today: “Our public transportation system is very important to Bermuda, providing daily commuters and tourists with safe and dependable transportation options across the island. “There are a large number of Bermudians working to ensure the necessary service level for the island’s ferries and buses is maintained on a daily basis.”

The Minister is also meeting with officials from the Transport Control Department, the Department of Energy and other departments and Authorities that fall under his Ministry.

Bermuda Real has submitted a request for a one on one interview with the Minister, confirmation is pending.

US Rocked By 3 Mass Shootings During Easter Weekend; 2 Dead