Police and first responders attended the report of a three vehicle collision that occurred at the junction of Ord Road and Cobb’s Hill Road in Paget around 12:30pm this afternoon.

A police spokesman said: “Initial information suggests that two men on a motorcycle were travelling west along Ord Road when they were involved in a collision with a private motorcar, which was headed south from the Cobb’s Hill Road junction.

“As a result, the motorcycle was thrown into the path of a taxi which was stationary on the opposite side of the junction.

“Both men on the motorcycle were transported to KEMH for treatment. The the extent of the passengers injuries is not known at this time, however the rider is being treated for suspected head injuries.
“Occupants in the other two vehicles were not injured,” he added.
The scene was still being processed by traffic accident investigators roughly an hour later. And members of Bermuda’s motoring public in the area were asked to exercise patience, and/or avoid the area if possible, while traffic diversions were being conducted.
Police diverting traffic from the east is being onto Harvey Road, while traffic from the west was being diverted onto Dunscombe Road in Paget. 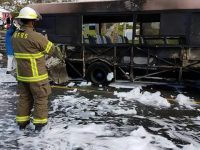 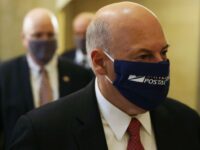 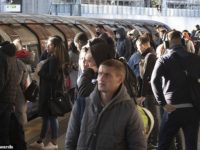