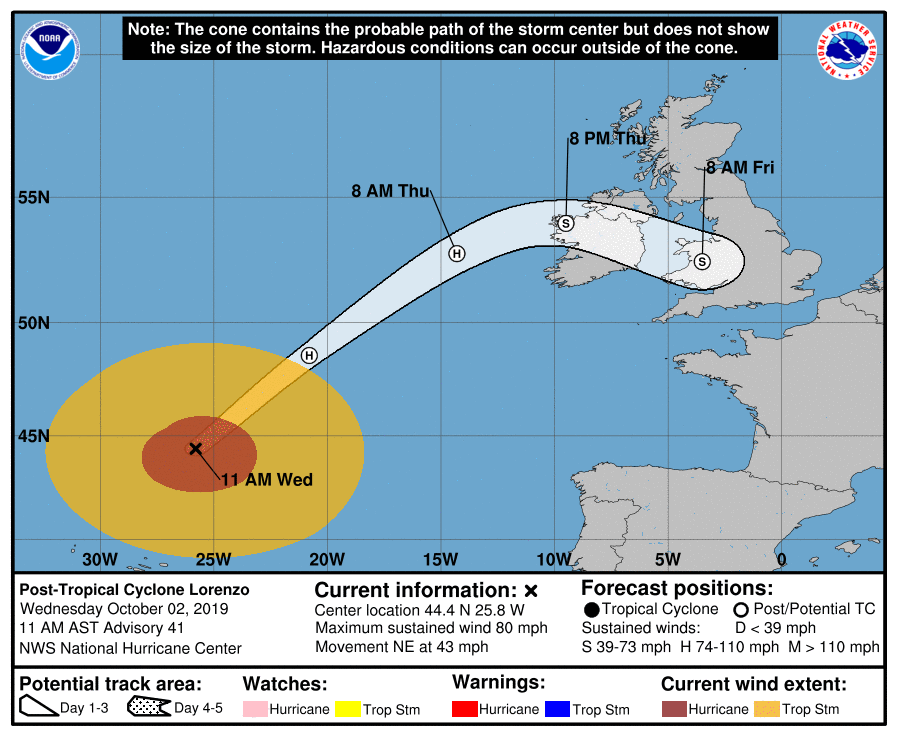 Thousands were left without power in Ireland this weekend after Hurricane Lorenzo hit overnight on Thursday.

“The post-tropical cyclone — formerly Hurricane Lorenzo — is set to bring more ‘unsettled’ conditions in the UK throughout the weekend”, the Met Office said.

“A yellow weather warning for much of eastern Britain on Sunday as heavy rain is expected to cause flooding and potential travel disruption.”

Warnings remained in effect in 11 Irish counties until late Friday morning as winds up to 34 mph and gusts up to 64 mph subsided.

International news reports say a search and rescue operation has been underway since the end of last week for the missing crew of a Luxembourg-flagged tugboat that overturned in the Atlantic after it ran into difficulties in the eye of the storm.

“Four crew members have so far been confirmed dead during the search, which is being coordinated by French West Indies-Guyana search and rescue authorities and the French Navy along with assistance from the US,” one report said.

“In a statement after the fourth body was found, the owners of the boat said it was by the sides of the families to ‘accompany them through this terrible ordeal’.

“Despite significant search resources for the rescue of the crew, the fate of the missing is an ever-increasing source of anxiety for the families.

“Since the operation began, three people have been rescued safely. Seven crew members are still missing.”

Forecasters anticipate Lorenzo will have “largely petered out” by the time it reaches London.

The storm was expected to weaken as the day passed by and “end more with a fizzle rather than a bang”.

The 500-mile-wide storm was dubbed a “real beast” by the Met Office as it “hurtled” across the Atlantic Ocean heading for the UK.

The report concluded: “But it seems now the ‘beast’ is running out of steam.”