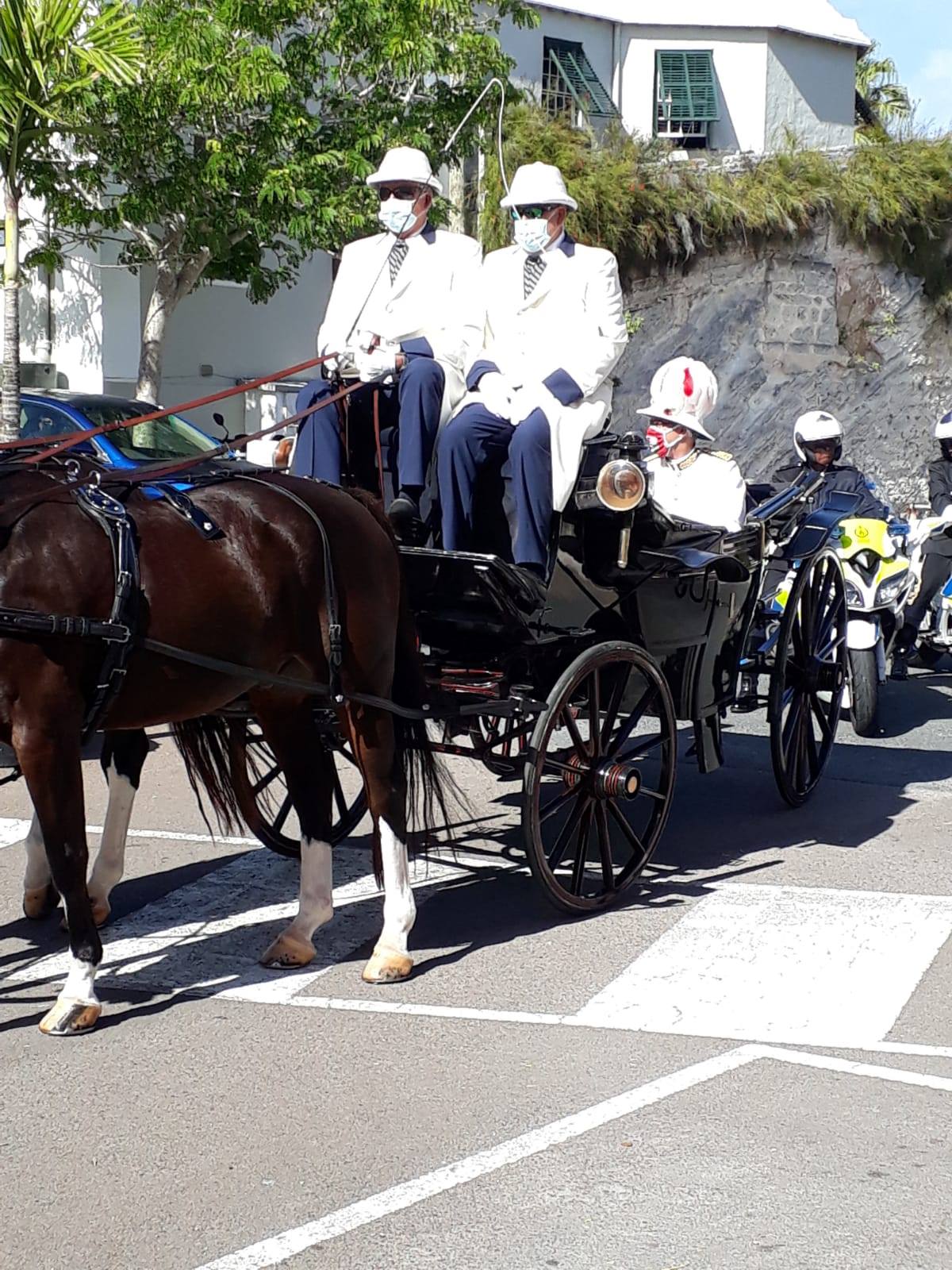 Bermuda’s legislature convened on Friday “within earshot of the venue, 400 years ago, an Assembly composed only of white men, was summoned to meet by the then Governor Nathaniel Butler”.

In what would be his last Throne Speech, outgoing Governor John Rankin stated in his opening remarks: “History records that they came together to discuss local issues, administer justice and review legislation.

“To the representatives of Bermuda’s then Eight Tribes, Nathaniel Butler said: ‘We come not for ourselves only…or any man’s in particular, but to serve and regard the public…’

“From that initial admonition, voiced when even the Pilgrims had not yet set out from Plymouth, England for the American colonies, Bermuda’s Legislature has endured. In these four centuries, the walls of those chambers in which the Legislature has met could speak of debates on slavery, universal adult suffrage, the end of capital punishment, human rights and all manner of laws meant to ‘serve and regard the public’.”

Four hundred years later, he said: “Today, black and white, women and men represent a people whose vote is of equal value across an Island that has surpassed the likely dreams of those who met in that first Assembly, only 11 years after the Sea Venture happened upon this uninhabited North Atlantic paradise.

“More than ever, the yoke of representative service weighs heavily on those who have taken it up. Four hundred years later, the Commonwealth’s oldest representative body outside the United Kingdom’s Parliament will be summoned again to deliberate and act in unprecedented ways in these unprecedented times to meet equally unprecedented challenges.”

On that note the Governor said: “The unequal beginnings of the different races in Bermuda have culminated in a history that is in degrees untold or not agreed.

“The ongoing Commission of Inquiry into Historic Land Losses is one such exercise in achieving a correct telling and agreed account of our history. 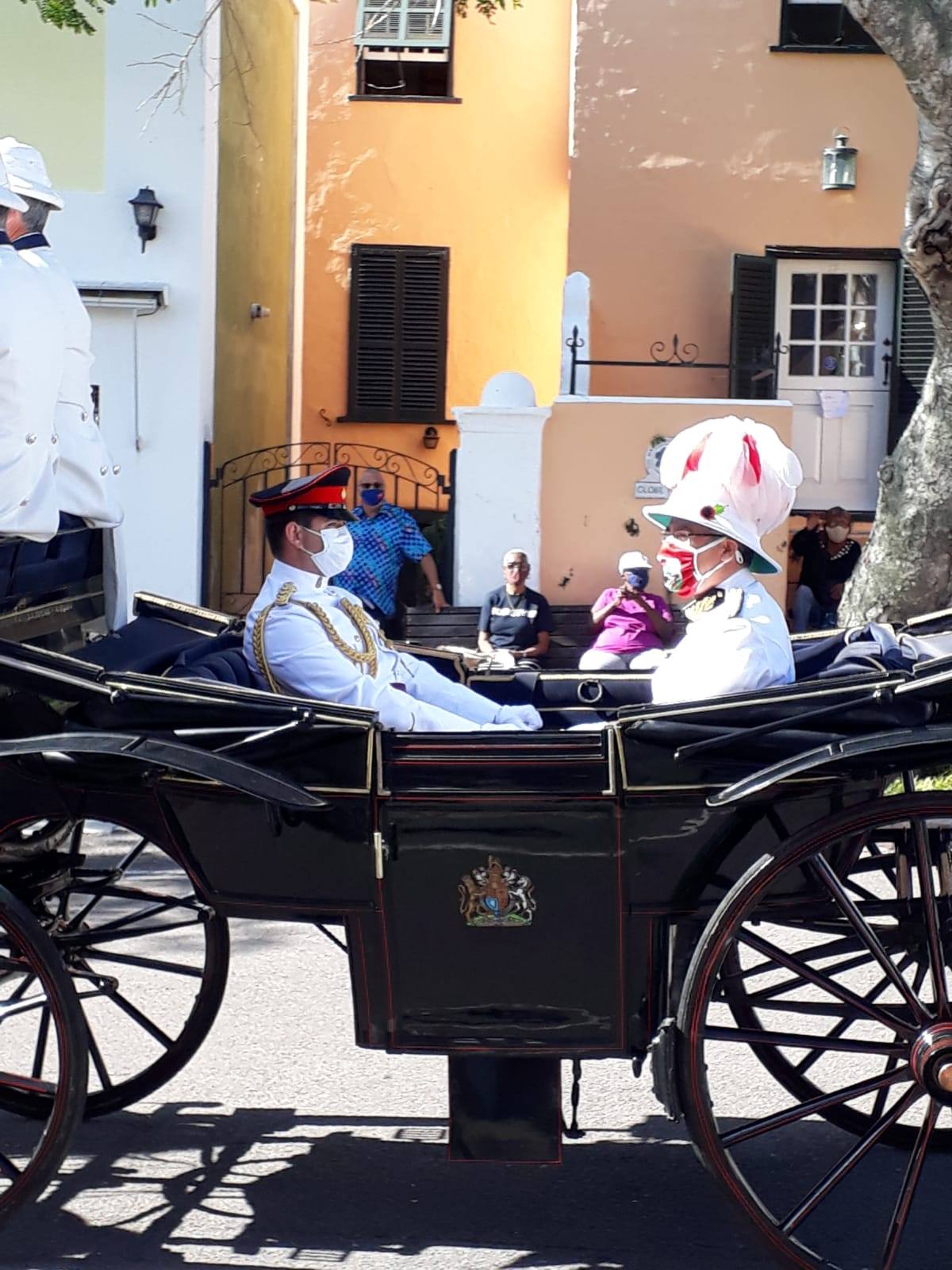 “Black people, in particular, have often been deprived of a history told through their experiences.

“The importance of this to the development of later generations cannot be underestimated. The Guyanese scholar and social justice champion Dr Walter Rodney spoke of what he termed ‘a series of responsibilities’ of black people, the most important of which ‘is to define our own situation’.

“An unresolved history is a divider that impacts our cultural identity.

“Dr Rodney also observed: ‘A culture is a total way of life. It embraces what people ate and what they wore; the way they walked and the way they talked; the manner in which they treated death and greeted the newborn’.”

This historical reality check was stated at the very outset of this year’s Speech From The Throne that sets the Government’s legislative agenda for the next parliamentary session.

When it comes down to Bermuda’s real history in today’s perspective, the Progressive Labour Party government pledged “to discuss a National Cultural Heritage Policy for Bermuda”.

“This Policy will combine those strands that jointly speak of Bermuda’s uniqueness and shared identity with those peoples from whom we are descended,” said Governor Rankin.

“One history, many cultures, a shared cultural identity.

“The world’s great powers find themselves unable to leverage their traditional tools of economic and military might against an invisible threat to the systems and institutions on which they depend. COVID-19 has unleashed a reckoning that has shredded the veneer of equality of opportunity that has long been professed by modern democratic societies”, he added.

“Governments the world over have been forced to confront the reality that rebuilding cannot be a one-dimensional return to what was. Bermuda is no exception.

“In the midst of a public health crisis, affordable universal healthcare for all is an unquestionable priority. In collaboration with Bermuda First, the Government will introduce a Bermuda Health Plan that will, through technology, maximise efficiencies via an integrated healthcare model.

“Public and private sectors will join to reduce Bermuda’s healthcare spend and drive better healthcare outcomes. Focusing on prevention as well as primary and community care will significantly reduce the imbalanced reliance on expensive hospital care. Bermudians pay too much for healthcare, and so we must seize this unique opportunity to enact systemic reform that will lead to reduced financial pressures on families and small businesses.

“To further reduce costs to consumers, the Government will mandate pharmacies to provide pricing information on the most commonly prescribed medications to establish a national drug formulary. This will permit maximum prices to be set for the most frequently prescribed medicines, reducing costs to patients and providing relief to those on fixed incomes.”

We’ll take a closer look at the Government’s planned healthcare reform and the full Throne Speech, in-depth, in subsequent reports in the days ahead.