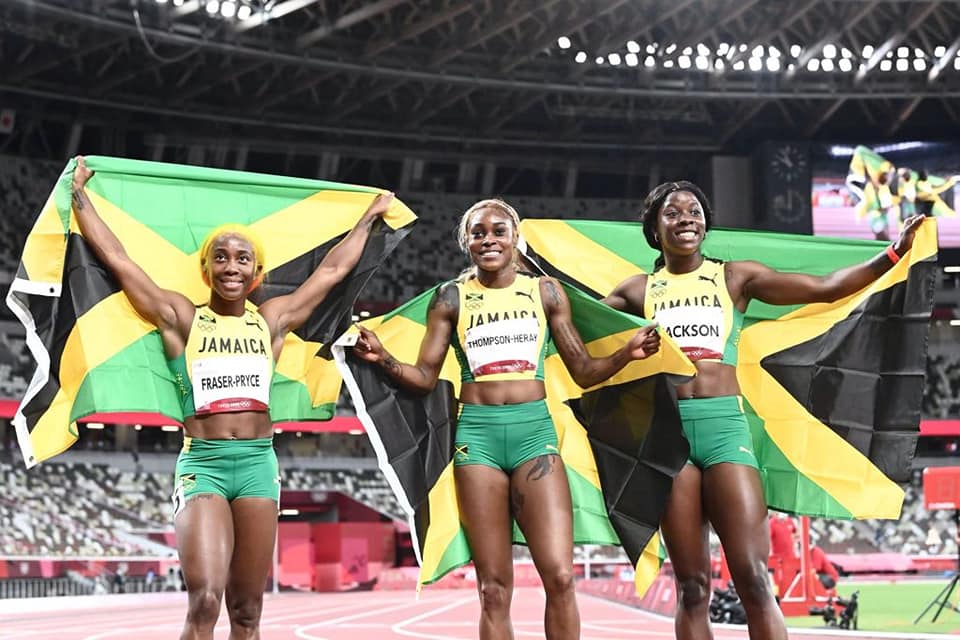 All that is left for the officials of the 29th Olympics, the delayed 2020 Tokyo Games, is the closing ceremony slated for later today.

The Jamaicans ended the Games with four gold, one silver and four bronze for a joint third-best medal haul with the Sydney 2000 Games when the county participated in four disciplines —athletics, swimming, sailing and triathlon.

The team of Roneisha McGregor, Janieve Russell, Shericka Jackson and Candice McLeod took Jamaica home in third place in a season’s best 3:21.24 minutes behind the runaway winners, the US in 3:16.85 minutes (season’s best) and Poland second in a National Record 3:20.53 minutes.

The ladies were elated with the reward, especially Jackson who was claiming her third medal at these Games following her third-place finish in the women’s 100m final, and gold as part of the successful 4x100m relay team.

She could have and should have claimed another but threw away the opportunity with an error of judgement in the 200m first-round heats.

“I’m just grateful. This is my fifth Olympic medal overall so I’m just extremely grateful to come out here and help the team get a medal,” beamed Jackson.

“I’m going home with three medals. Maybe I wanted to go home with four but things happen and we have to move on.”

Having contested the sprint double and being a member of the successful sprint relay team, Jackson was called upon to lend a helping hand to the quarter-milers, especially with the withdrawal of Stephenie Ann McPherson who suffered a hamstring injury during the 400m final the previous night.

“I was like, ‘My God, I hate the 400. I’m not a quarter-miler anymore, I’m a sprinter. So, I was kind of nervous because I never knew what kind of ‘quarter’ shape I was in, but nevertheless I came out here and I did my best,” shared Jackson, who appeared heavy-legged and had to seek the support of her teammates at the end of the event to get back on her feet.

But she was also extremely happy for her special friend Candice McLeod, whom she has known for more than 12 years from their time at Vere Technical High School.

“Honestly, I’m just grateful for Candice. I’ve been there with her from she was running 63 [seconds for 400m], so now she running 49 [seconds]. It’s just a journey for her. She has been working really hard and her hard work is finally paying off, and it’s just great to see how well she’s performing and to know that this is her first-ever senior team and to see how well she ran the anchor leg. It’s a wonderful feeling and I can’t wait to see what more is in store for her. I run on a 4×4 with my friend and we got a medal together. We’re grateful.”

Another athlete who was over the moon was Russell, whose exploits in the 400m hurdles final (personal best 53.08 seconds in an event ran in a World Record 51.46 seconds by American Sydney McLaughlin) deserves much more.

“I’m really happy but as I said before, that fourth place is really a medal because I really wanted to get a personal best and I got that, and today I was just running with guts. My emotions are overwhelming as I wanted to keep the medal position and I’m happy that I’m going home with a medal…an Olympic bronze medallist,” Russell noted.

And first-time Olympian McGregor was happy to have given the team the spark it needed.

“I’m a part of history! My first Olympic medal and we did it as a team, so I’m really grateful to be a part of this moment – a season’s best. I couldn’t ask for anything more,” she said.

“I’m extremely happy with the start, knowing that I have to give them a good start leg, and I did just that and I’m really comfortable that my team was able to tag along to the best of their ability.”

For McLeod this might have been the reality of an Olympic medal, but in her mind’s eye she had already claimed ‘gold medals’ with her personal best times during the semis and final of the 400m.

“This is definitely not my first medal,” she claimed without batting an eyelid. “I won two gold medal (two personal best times she produced during the 400m), so yes, correction, I have two gold medals and a bronze medal.

“Honestly, this is one of the races that I was not nervous about but I know I am kind of inexperienced with the 4×4. Nevertheless, I wanted to come out and contribute to the team and that is what I did.”

And when quizzed about the pressure of anchoring this team to a medal in such a challenging position, she responded: “Oh no, I was not in a pressured position because whatever I had to do, I went out there and did it!

“If it is that this wasn’t the result, definitely what I would have done would have been my best, so it wasn’t a pressured position. I just did my best.”

Meanwhile, the men’s 4x400m team of Demish Gaye, Christopher Taylor, Jaheel Hyde and Nathon Allen could fare no better than sixth despite their season’s best 2:28.76 minutes.

Belgium finished fourth in a National Record 2:57.88 minutes and Poland fifth in a season’s best 2:58.46 minutes.

Italy was seventh in a National Record 2:58.81 minutes and Trinidad and Tobago eighth in 3:00.85 minutes.

The consensus coming from the quartet is that they were well below their best due to various reasons, but they are optimistic that with time and full fitness they will be a force to be reckoned with come Paris 2024.