BBC News: Sunday, April 11, 2021 – There has been another “explosive event” at a volcano on the Caribbean island of St Vincent, with power outages and water supplies cut off.

The La Soufrière volcano first erupted on Friday, blanketing the island in a layer of ash and forcing some 16,000 people to evacuate their homes.

Residents in Barbados, nearly 200km (about 124 miles) to the east, have also been urged to stay indoors.

Scientists warn that eruptions could continue for days – or even weeks.

White-coloured dust has covered buildings and roads around the island, including in its capital Kingstown.

How are residents coping?

Nemo is urging people to “be careful on the roads, which have become treacherous as a result of the ash flow”.

Prime Minister Ralph Gonsalves said water supplies to most of the island had been cut off and its airspace closed because of the smoke and thick plumes of volcanic ash moving through the atmosphere.

Mr Gonsalves said thousands of residents had been sleeping in emergency shelters since Friday. “It’s a huge operation that is facing us,” he told NBC News.

He said earlier that a lot of volcanic ash had fallen over the sea. “We don’t know how much more is going to come out… so far, we have done well in that nobody got injured, nobody is dead.”

The Barbados Defence Force has been deployed to St Vincent to provide humanitarian assistance as part of a disaster response mission, the Caribbean Disaster Emergency Management Agency said.

Homes across the island, which has a population of around 110,000, have been covered in white-coloured volcanic dust and rock fragments.

It prompted warnings from officials to stay indoors, while emergency groups advised caution for those suffering with respiratory problems.

“Be careful all. We are covered in ash and strong sulphur scents pervade the air. We ask that you take the necessary precautions to remain safe and healthy,” Nemo said.

How is the wider region being affected?

On Barbados, Chief Medical Officer Kenneth George advised residents to “stay in your house”. “This is to protect yourselves and your family,” he said.

People on the island of St Lucia, which is around 76km north of St Vincent, have been warned to expect air quality to be affected, with harmful gases potentially making it harder to breathe for people with conditions such as asthma, the island’s Rodney Bay Medical Centre said.

One resident of St Lucia, Olivia, told the BBC she had never witnessed anything like this before and that she was worried about a possible change in wind direction and ash being carried northwards.

“I am terrified of all the effects that are unknown at this point, ash in the middle of a pandemic – no-one is prepared for that,” she said.

“Victoria Hospital has been transformed to become the Respiratory Hospital, and is treating Covid patients” she said, adding: “So technically, persons suffering from the effects of ash inhalation would be on the wards with Covid patients.”

More than 130 people who were due to leave St Vincent for Canada had to be taken by ship to St Lucia on Saturday after becoming stranded when their flight was cancelled.

Other Caribbean countries, including Antigua and Guyana, have offered to send emergency supplies to St Vincent. They also said they would open their borders to those fleeing the fallout from the eruption.

When did the new eruptions begin?

The volcano had been dormant since 1979, but in late 2020 it started spewing steam and smoke and making rumbling noises.

The first sign that an eruption was imminent came on Thursday evening, when a lava dome became visible on La Soufrière.

Just before 09:00 on Friday (13:00 GMT), seismologists from the University of the West Indies confirmed that an “explosive eruption” was under way. 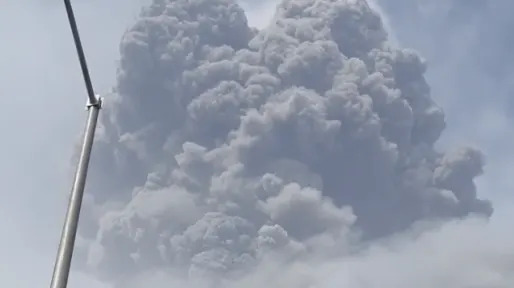 Addition explosions were reported at La Soufriere volcano on the Caribbean island of St Vincent on Friday, April 9, hours after an initial eruption rattled the country and prompted evacuations.The volcano began erupting on Friday morning, when the government of St Vincent and the Grenadines said ash plumes were sent as high as 20,000 feet into the air.This footage, taken by local politician Carlos James, shows massive clouds rising above St Vincent on Friday afternoon, when emergency authorities in the country confirmed a second explosion had taken place.Ash from the volcano is traveling east, and authorities in nearby Barbados said they expected clouds from a second explosion to reach their shores on Friday evening.

Ash blown across over 100 miles of ocean from the La Soufriere volcano on St Vincent plunged Barbados into darkness on Saturday, April 10.This drone footage, shot on Saturday afternoon, shows the sky above northwest Barbados glowing in a dark reddish tone.The country’s meteorological service reported that a “thick plume of volcanic ash” was impacting the island on April 10, and forecast additional ash would traverse the island that afternoon. Credit: Alec Drayton via Storyful 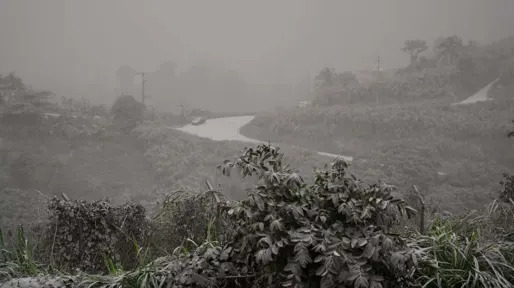 Massive power outages struck the Caribbean island of St Vincent before dawn on Sunday, as officials recorded more explosive activity at a long-dormant volcano that launched into a series of eruptions. After remaining quiet for nearly 42 years, La Soufriere rumbled back into life Friday, blanketing the island in ash and permeating the air with the stench of sulphur. The eruptions prompted thousands to flee for safety, with around 16,000 people living in areas under evacuation orders. The country’s National Emergency Management Organization (NEMO) noted “another explosive event” early Sunday morning with the “majority of the country out of power and covered in ash”. The volcano’s explosive phase is expected to last several days or even weeks, according to the Seismic Research Centre at the University of the West Indies (UWI), which advised residents to avoid inhaling the volcanic ash. The whitish powder caked roads, homes and buildings in Saint Vincent after the powerful blasts began Friday and continued into the night. 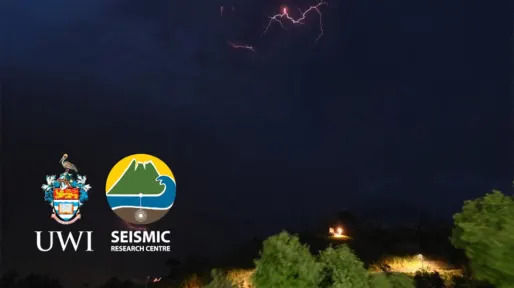 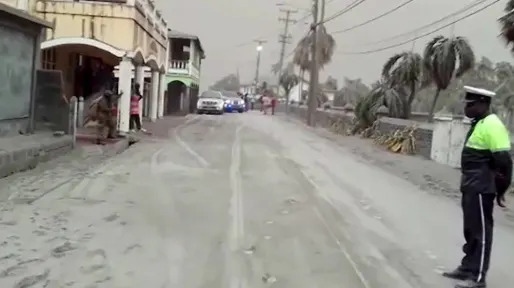 Locals on the Caribbean island of St Vincent are surveying the damage after a volcano erupted on Friday, following decades of inactivity.Rumbling noises could be heard from La Soufriere volcano, as grey ash blanketed cars, buildings and roads showing a ghost-like landscape in the capital Georgetown.On Saturday, a disaster response member who gave his name as Bill, explained that the eruption has big implications for the farming community.”Life will be very difficult for people within this side of the country.”In a statement at 10am Saturday, emergency services warned that those living close to the volcano should be prepared to evacuate.The Prime Minister said it was unclear how much more ash would vent from the volcano and said more than 3,200 people were now in shelters.Saint Vincent and the Grenadines, where just over 100,000 people live, has not experienced volcanic activity since 1979. 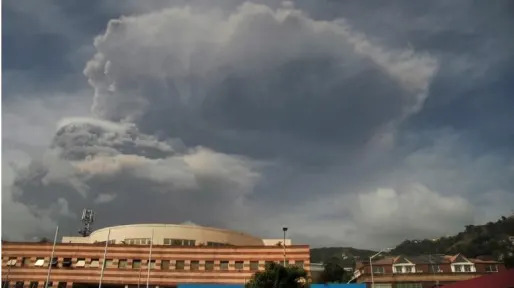 Thousands of people in Saint Vincent have been evacuated after the La Soufrière volcano erupted.

Major Storm Set To Bring Rain, Flooding To NYC Ahead Of Coldest Christmas In Decades