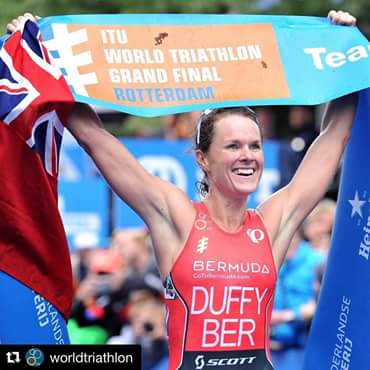 Sports Minister Zane DeSilva extended his congratulations to Bermuda’s world-renowned triathete Flora Duffy on her win today at the World Triathalon Series (WTS) Grand Final in Rotterdam, making her the overall winner of the series.

Duffy crossed the line first at the ITU World Triathlon in Stockholm. In a statement released this afternoon, Mr DeSilva said: “I am extremely pleased to celebrate Flora’s win today – her sixth victory of the season. This champion has put an incredible amount of time and effort into being the best of the best. I am sure the whole island will join me in celebrating her astounding success.

“Seeing her draped in the Bermuda flag at the end of the competition filled me with immense pride,” said the Minister. “What an absolutely outstanding display of strength, dedication and endurance from someone representing the tiny island of Bermuda!”