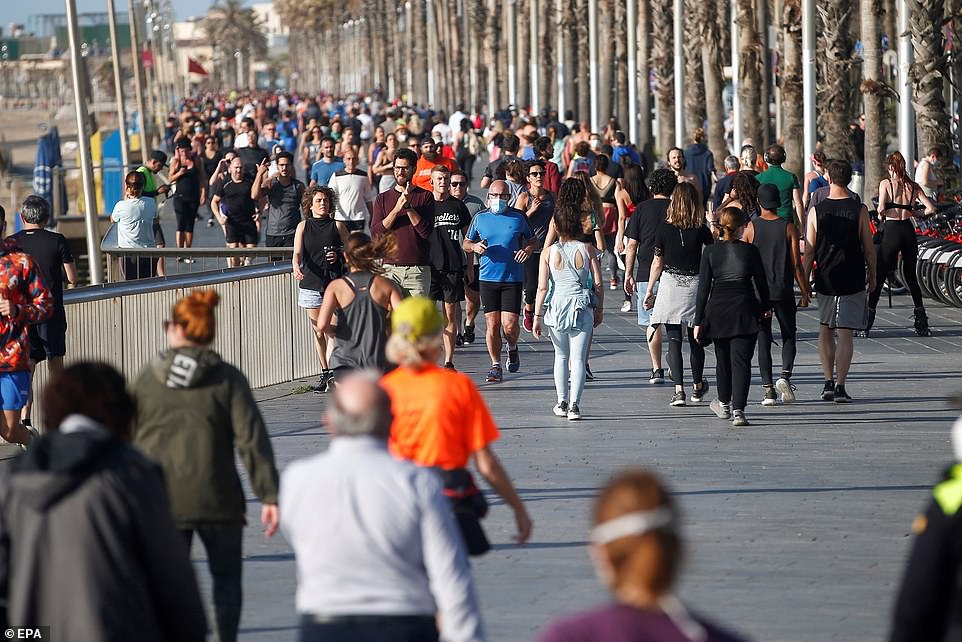 Cyclists and runners took to the streets and seafronts of Spain today as the country continued to ease its coronavirus lockdown while other European nations begin to gently ease out of quarantine.

Mail Online reports: “The most-committed Spanish fitness junkies darted from their homes at 6am after 49 days of confinement to make the most of their four-hour window this morning. They will also be allowed out between 8pm and 10pm tonight.

On Friday, Austria ‘abandoned’ restrictions on movement altogether, after the Public Health Minister Rudolf Anschober announced a roadmap out of lockdown for May, earlier this week, the report added.

“Austria loosened its quarantine early, with small shops allowed to open in mid-April, which is being extended to beauty salons this month.

“The European nation has consistently reported under 100 cases of the coronavirus per day, with just 542 deaths since the start of the outbreak, according to the World Health Organization.

“Meanwhile, by breakfast time this morning, thousands of cyclists had taken to a five-mile footpath in Barcelona known as the La Carretera de les Aigues – Road of the Waters in English – making it difficult to maintain social distancing guidelines. 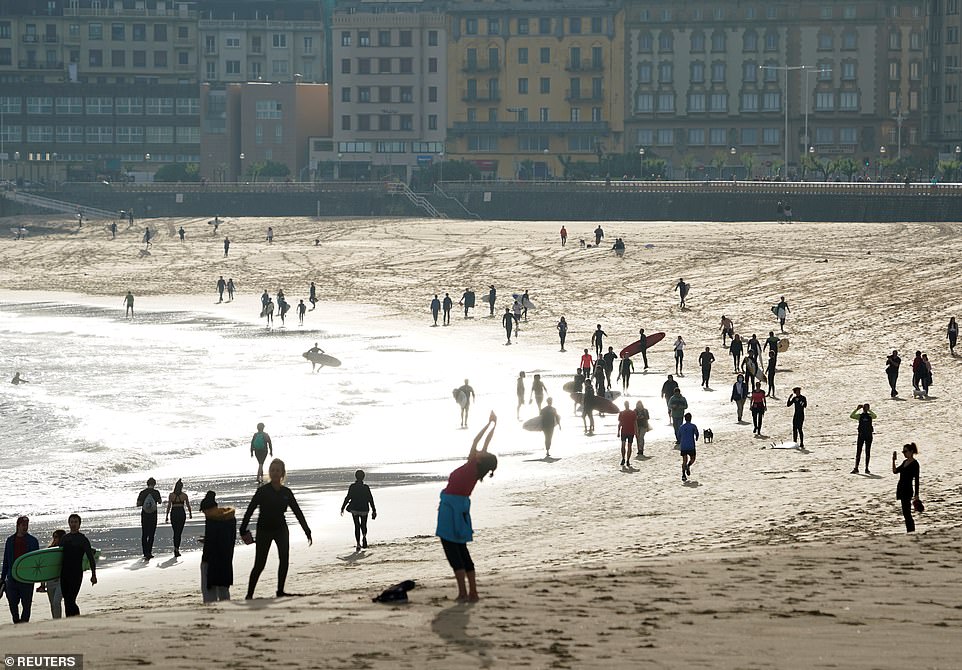 Spanish surfer Letizia Canales, ranked among the world’s top-10 surfers, trains for the first time since the coronavirus lockdown was declared in Sopelana, Basque Country this morning

“At a press conference this afternoon, while elderly Spaniards were stretching their legs, Prime Minister Pedro Sanchez announced a £14billion reconstruction fund for the country, and he also made face masks mandatory on all forms of public transport.

“The Madrid government, which had until now ‘highly recommended’ the use of masks, will distribute six million across the country from Monday and supply another seven million to local authorities.

“In parts of Madrid sports enthusiasts, most without face masks, today got close to each other as they used the same pavements to exercise.

“Today marked the start of the time-slot system announced by health minister Salvador Illa on Thursday.

“Adults wanting to do individual sport like running and cycling have been told they must go out between 6am and 10am or 8pm to 11pm.

“Those aged over 70 who want to go for a stroll must wait for their two-hour window between 10am and midday or 7pm to 8pm.

“And children under 14 with a parent, who have been allowed out for an hour between 9am and 9pm since last Sunday, will continue to be able to do so but only from midday to 7pm.

“Adults under 70 wanting to stroll have also been told to stick to the same timetables as sports enthusiasts, but they must stay within a kilometre of their homes and walk for an hour maximum.

“Those doing sport can move within their municipality for as long as they want within their allocated time-slot.

“Beaches in Tarifa were opened to water sports enthusiasts including windsurfers and kite-surfers, although swimming will remain off limits until at June 8 when some areas hope to move towards the last phase of a national de-escalation plan.

“In towns and cities, the odd rollerblader mixed with the many runners and cyclists.

“But, the high number of deaths from Covid-19 number still looms over the mediterranean country, with the tally surpassing the 25,000-mark today.

“Spanish health chiefs said 276 people with coronavirus had died in the 24 hours prior, taking the number of COVID-19 deaths since the start of the crisis to 25,100.

He said: “Today we take a new step with the measures easing confinement but we must do it with common sense and responsibility.

“The virus is still out there.” 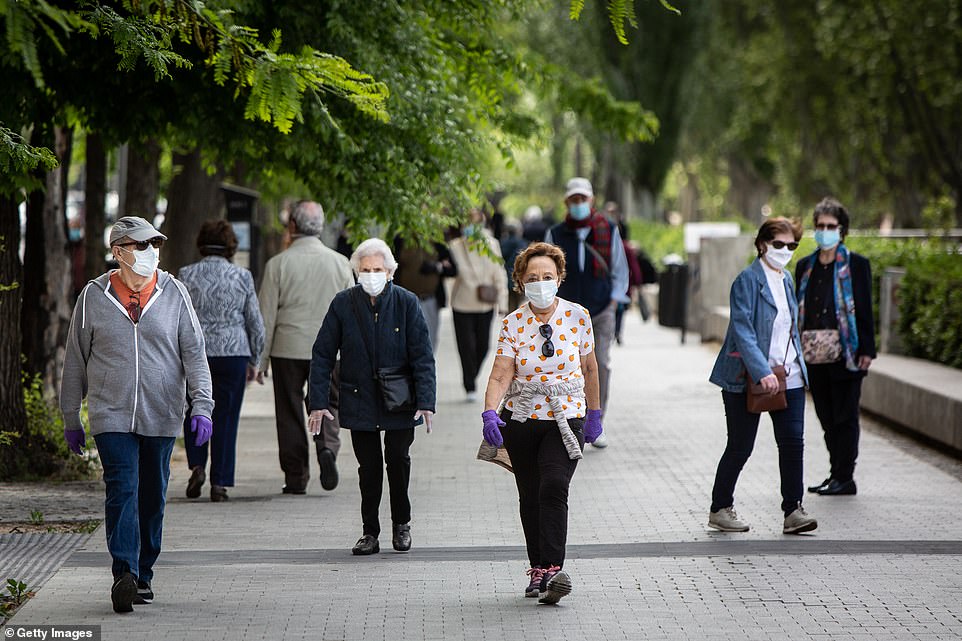 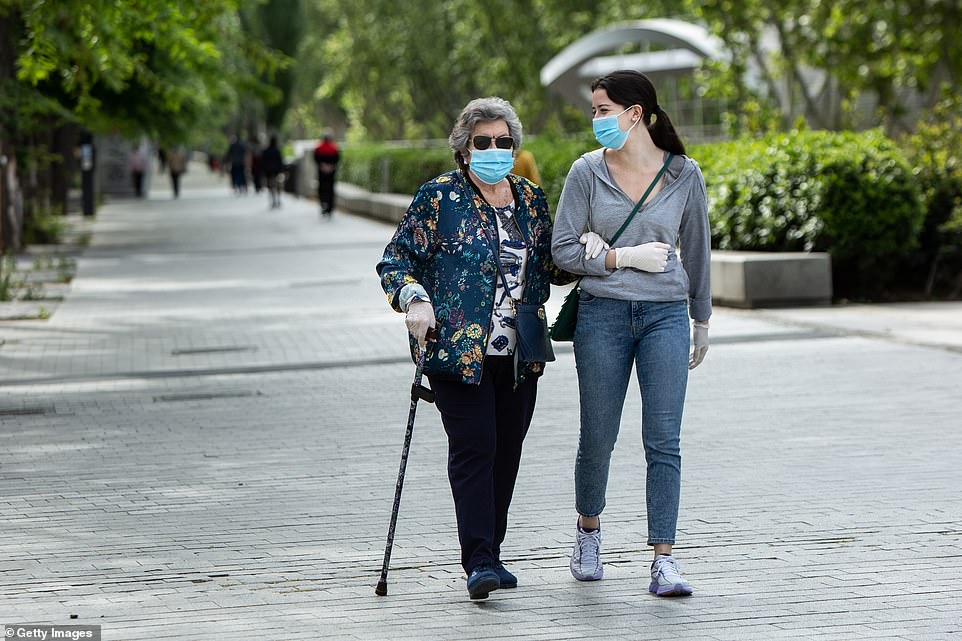 “With those timetables and the municipal boundary limits, it’s impossible to do cycling.

“It’s an invitation to everyone to go out at once and get close continually at times of the day when visibility is not great.

“Perhaps it’s been designed to give more work to our already saturated hospitals?”

Spanish PM Pedro Sanchez announced a four-phase COVID-19 de-escalation plan on Tuesday, which will kick off on some Canary Islands and Formentera in the Balearic Islands on Monday,.

“Hotels on the islands have been allowed to re-open, although hoteliers there and in other parts of Spain who expecting to be able to re-open on May 11 say they intend staying shut because there are no tourists.

“Travel between provinces and islands in Spain has been banned until at least June 22.

“The question of when air and land borders will be reopened, and foreign tourists allowed back into Spain, remains unanswered.

“Spain’s Tourism Minister Reyes Maroto confirmed on Thursday the Spanish government was preparing a plan to relaunch national tourism ahead of the peak summer season.

“On the question of foreign tourism she said her intention was that they ‘returned soon and with maximum safety guarantees, if the health and travel situation made it possible.’

“As Spain eases up its quarantine, UK Health Minister Matt Hancock today announced that the British death toll had risen by 739 to 27,510 deaths – just below that of Italy which was one of the first and worst-hit European states. 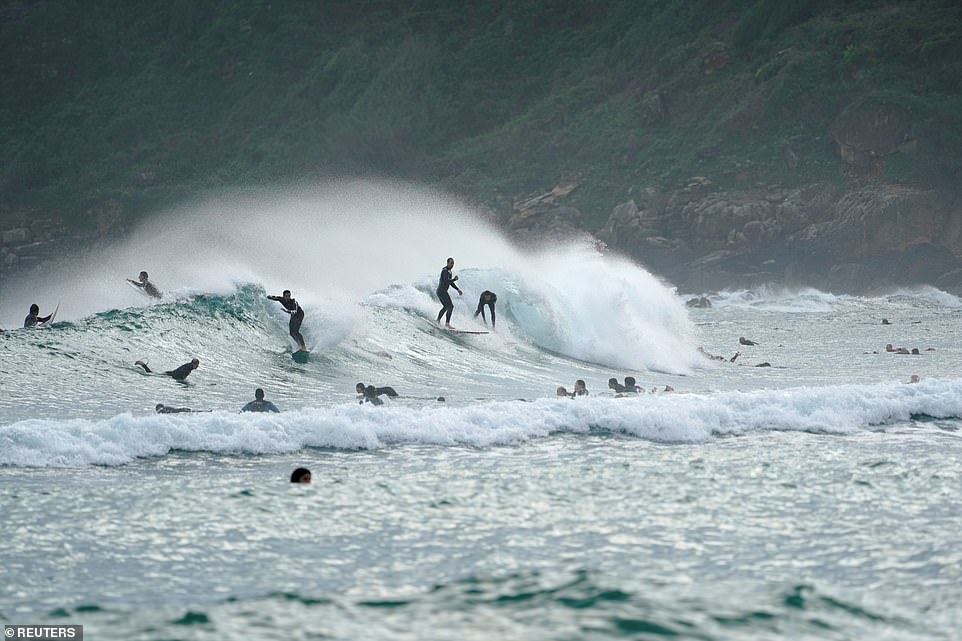 Surfers catch waves at Zorriola beach after adults were allowed out to exercise for the first time in seven weeks, as the government began easing coronavirus disease (COVID-19) restrictions, in San Sebastian, Spain today

“Deaths in Italy climbed by 269 on Friday, down from 285 the day before, the country’s Civil Protection Agency said, while the daily tally of new infections stood at 1,965 against 1,872 on Thursday.

“The total death toll since the outbreak came to light on 21 February now stands at 28,236, the agency said, the second highest in the world after that of the United States. Even Italy, which has been hit so hard by the virus, will begin to ease restrictions on Monday, Prime Minister Giuseppe Conte said last week.

“Italians will soon be able to visit their relatives, but only in small numbers, while parks, factories and building sites will also reopen.

“But, children will not be asked to attend classes until September,” the PM said.

“Developments show that Spain is pulling out of the crisis that has now claimed the lives of 24,824 people.

“The death toll rose by 281 overnight, according to the health ministry, a small rise from the previous day but still one of the lowest daily tolls in weeks.

“But the economic cost was adding up. Economy Minister Nadia Calvino on Friday announced a forecast of a record fall in Spain’s gross domestic product (GDP) of 9.2 per cent in 2020 – greater than during the country’s Great Recession of 2008-2013.

“However, the pandemic’s decline in Spain has drastically reduced the number of people admitted to hospitals – 732 new patients, according to the latest data – and authorities on Friday closed down the temporary facility set up at Madrid’s Ifema exhibition centre.”

Data shows that 41,239 health workers have tested positive for COVID-19 so far,” the report said.