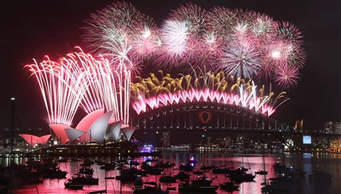 New Year’s Eve revellers in Samoa and Christmas Island (Kiribati) were the first to ring in 2020 and kick off the new decade.

Mirror Online reports: “The islands in the South Pacific are immediately west of the International Date Line.”

Celebrations were scheduled to get underway in New Zealand, where “there clock strikes midnight at 11am UK time”.

“At 1pm UK time, the new year begins across much of Australia, including Sydney, where its spectacular harbour fireworks display is going ahead despite the deadly bushfire crisis.

“London’s show will feature 12,000 fireworks, including 2,000 from the London Eye on the River Thames, and Big Ben’s chimes for the first time in a year amid renovation work,” the report added.

“Outlying American islands in the South Pacific, which are just east of the International Date Line, will be the last to welcome 2020 at 12pm UK time on Wednesday – more than 24 hours after Samoa.

“The clock will strike midnight in eastern parts of Australia, including Melbourne, Sydney and Canberra, at 1pm.

“Sydney’s dazzling fireworks display is going ahead despite Australia’s bushfire crisis, which has claimed more than a dozen lives and destroyed towns.

“The city’s harbour was cloaked in smoke on another sweltering day as huge crowds gathered to watch the display, which annually ranks among the world’s best.

“But more than 250,000 people had signed a petition urging Sydney to cancel the celebration due to the wildfires.

“The city pressed ahead with its plans and was granted an exemption from a total fire ban.

“As the rest of Australia rings in the new year, they will be joined by revellers in Japan and South Korea. Fireworks are also likely in North Korea’s capital Pyongyang.

“In Hong Kong, pro-democracy protesters were staging rallies around the city urging people not to give up the fight for democracy in 2020.

“From 4pm UK time, celebrations will spread from China and Singapore to across Asia and the Middle East, where Dubai promises a dazzling display at 8pm UK time,” the report said.

“Celebrations will then reach Europe as Moscow rings in 2020 with fireworks in the Red Square at 9pm UK time.

“The Russian capital has dumped artificial snow in the city centre for the celebrations as it experiences its warmest December since 1886.”

Meanwhile, more than 100,000 people were expected to gather along the River Thames to watch London’s sold-out fireworks show.

“Big Ben’s chimes will kick off the display as they sound for the first time in a year amid renovation work.

“Samoa is the first country to usher in the new year thanks to its position just west of the International Date Line.

“After celebrating there, revellers can take a one-hour flight to American Samoa, a US territory on the other side of the date line, and party there one day later.

“Despite being less than 100 miles apart, American Samoa is 25 hours behind Samoa, making it one of the last places to enter the new year.”