Daily Mail Online: LONDON, England – Bikers linked to DMX’s hip hop collective Ruff Ryders on Sunday paid tribute outside the hospital where the rapper is fighting for his life.

The group of fans gathered outside White Plains Hospital in New York to play his music and show their support after the 50-year-old had a heart attack.

Sources told TMZ that the star, whose real name is Earl Simmons, overdosed around 11pm on Friday and was rushed to the hospital where he is in critical care.

DMX’s 15 children are all said to be flying to New York to be by his bedside, it was reported Saturday.

Doctors have said the rapper’s prognosis is poor while family members have said his life hangs in the balance. 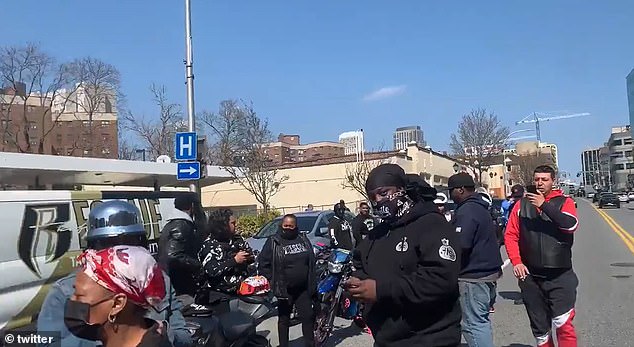 DMX was said to be off life support earlier Saturday but his lawyer later said that the news was a “misstatement”.

One relative explained that paramedics tried to resuscitate him for 30 minutes when he was taken to hospital on Friday night, during which time he was deprived of oxygen for an extended period.

Doctors say the lack of oxygen severely affected his brain, with one family member saying: “It’s not looking good”.

Although he has been described as having “some brain activity”, doctors are still worried that he may not pull through.

“Last night Earl ‘DMX’ Simmons was rushed to the hospital after collapsing at home. At this time he remains in ICU in critical condition. Earl has been a warrior his entire life. This situation represents yet another road he must conquer,” a statement by the family read.

“The Simmons Family appreciates the overwhelming outpouring of heartfelt love, encouragement, support and prayers for Earl. Earl is someone whose life and music have been a source of inspiration and strength to so many people around the world. It is reassuring to see his fans return that same passion and energy to him during his time of need.” 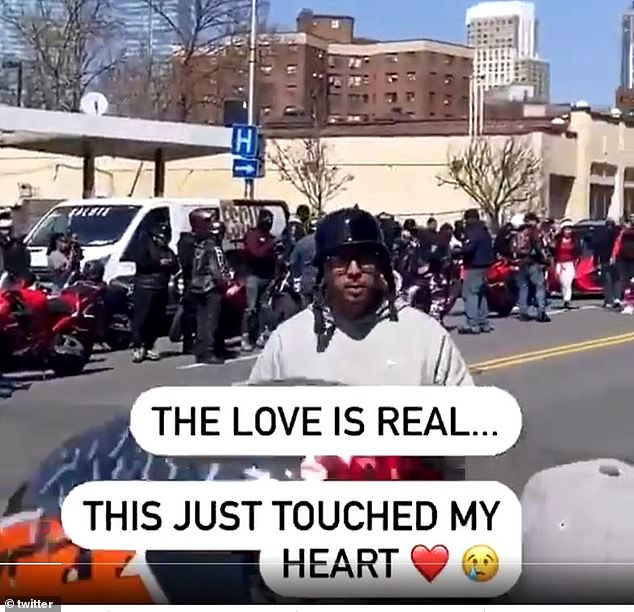 Details on what may have caused the heart attack were not provided and his lawyer Murray Richman said he could not confirm reports that DMX overdosed on drugs.

“He had a heart attack. He´s quite ill,” Richman said. “I’m very sad about it, extremely sad. He’s like my son.

A multitude of rappers and other artists tweeted positive thoughts at hearing the news that he was in the hospital.

“DMX prayed over me once and I could feel his anointing. I’m praying for his full recovery,”, wrote Chance The Rapper.

“Prayers up for my brother,” added rapper Ja Rule.

“I love DMX SO MUCH praying hard for the king,” said singer SZA.

“DMX was the first artist i was in an actual studio with. Those nights helped shape me into who i am put healing energy out there for X he’s the last of a dying breed,” wrote singer and rapper Machine Gun Kelly.

DMX made a splash in rap music in 1998 with his first studio album ‘It’s Dark and Hell is Hot,’ which debuted No. 1 on the Billboard 200 chart.

The multi-platinum selling album was anchored by several hits including ‘Ruff Ryders´Anthem,’ ‘Get At Me Dog’ and ‘Stop Being Greedy.’

The artist endured a grim childhood, growing up in housing projects with his mother and five sisters where he suffered abuse, and had continued run-ins with the penal system throughout his life, even after he achieved celebrity.

DMX, who is considered one of the biggest artists of the 90s and early 2000s rap era, has battled substance abuse in the past and has checked into rehab several times over the years.

His last known stint was in October 2019, ten months after his release from prison, but was seen performing on stage again just two months later.

The rapper is not known to have shown any signs of a potential relapse since, and he had been photographed at a public event as recently as February.

DMX was known to have suffered from addiction to drugs including crack, which he has said began as early as age 14.

“I didn’t really have anybody to talk to,’ he said in late 2020 in an emotional interview on Talib Kweli’s weekly podcast.

DMX has had a number of brushes with law involving drugs and other crimes over the years.

In January 2019, he was released from a West Virginia federal prison after serving a year behind bars for tax fraud.

He pleaded guilty in November 2017 to evading $1.7million in US tax payments between 2002 and 2005. On top of jail time, the Internal Revenue Service ordered him to pay $2.3million in restitution.

Prosecutors said the star had dodged taxes by living on cash, without maintaining a bank account or filing required tax returns to the IRS.

The native of Yonkers, a suburb of New York, was ordered to be under supervised release for three years.

But the following month, just 10 months after his release, the star took to social media to announce he was checking into rehab for an unspecified amount of time.

“In his ongoing commitment to putting family and sobriety first, DMX has checked himself into a rehab facility. He apologizes for his cancelled shows and thanks his fans for their continued support,” the post read.

It is unclear how long DMX was in treatment, but by late December he was seen back on stage in Las Vegas where he performed at the Hakkasan Nightclub.

The rapper appeared to be in good spirits and addressed his troubles during the show with a rousing address between songs.

“When you fall down, get back up, everybody here has been through some s**t and you never know what God is willing to do for you until you need him to do something for you,” he said to the crowd. 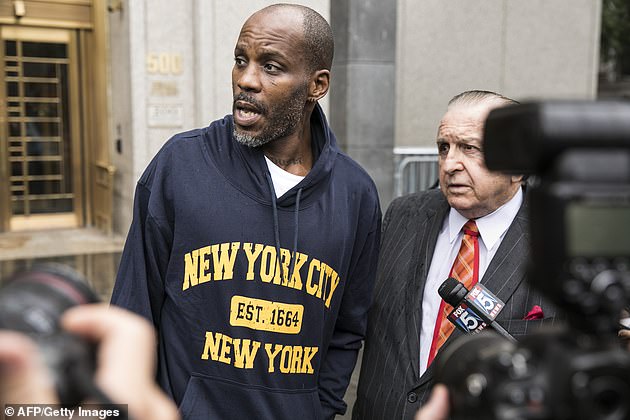 The rap artist, whose real name is Earl Simmons, was released from federal prison in January 2019 after serving a year behind bars for tax fraud. He is pictured leaving court with his attorney in 2017

DMX, whose deep, gravelly voice and dark, often violent lyrics catapulted him to fame in the early nineties, has a colorful criminal history.

The father of 15 has been arrested for a variety of offenses over the years including drug possession, reckless driving, animal cruelty and failing to pay child support.

Artistically he is best known for his 2000 smash hit ‘Party Up (Up In Here),’ in which he belittles other rappers. 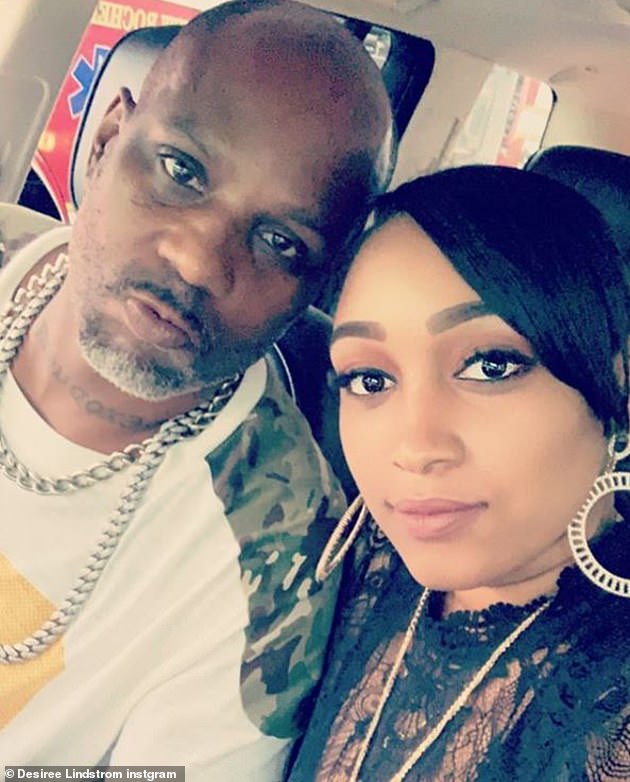 DMX, is famously a father of 15. He is pictured above with Desiree Lindstrom, who gave birth to his youngest child in 2016 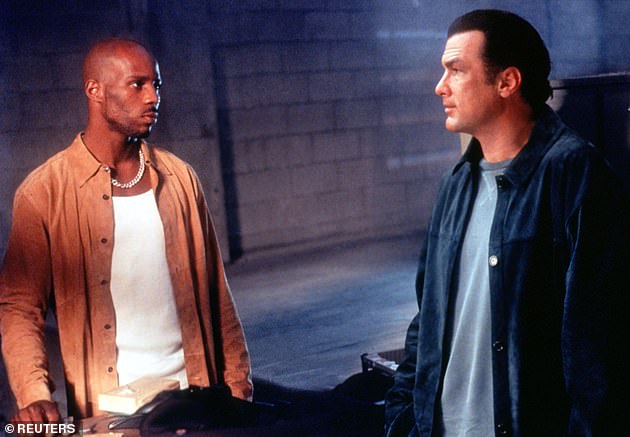 The rapper starred in a number of big films in the late 1990s and early 2000s. He is pictured above with actor Steven Seagal in a promo shot for 2001 film Exit Wounds

U-Roy Soars To The Top