Review: CultureShock18 Celebrating 25 Years With a Show in a Class by Itself!

It’s that time of year again when Cup Match fever sets in, as we look ahead to the annual two-day classic to be held at the Somerset Cricket Club this year.

As the popular soca song goes: “It’s Cup Match Time in Bermuda!” And this year, unlike many others, this year saw the return of CultureShock 18 – celebrating their 25th anniversary.

The show, held at Snorkel Park on July 7th was way beyond belief!

First of all the sound system was on point and off the chain! 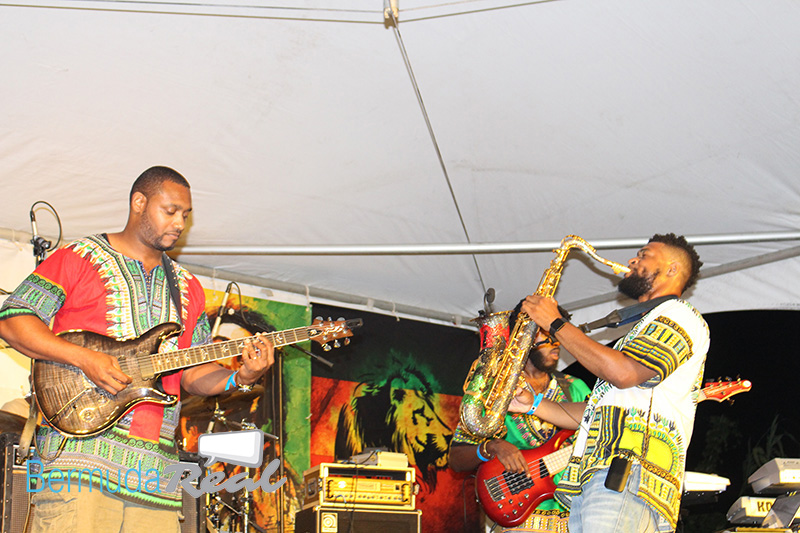 Then there was the local line up of star-studded artists representing Bermuda’s best, back by none other than the DIA Band, and they too were slamming!

It was clear early in the day, from the set up, to the sound check around 4pm, that this massive crew pulled together to put on this show were tight.

In hindsight, CultureShock founder Keith Simmons said: “It was a great success because Bermuda was ready for a good concert.

“The way the patrons responded and the way they enjoyed themselves, I’ve never seen so many people never stop dancing from start to finish.

“Every artist gave 100 percent – especially the local artists. They were top quality and held their own – I was highly impressed!” 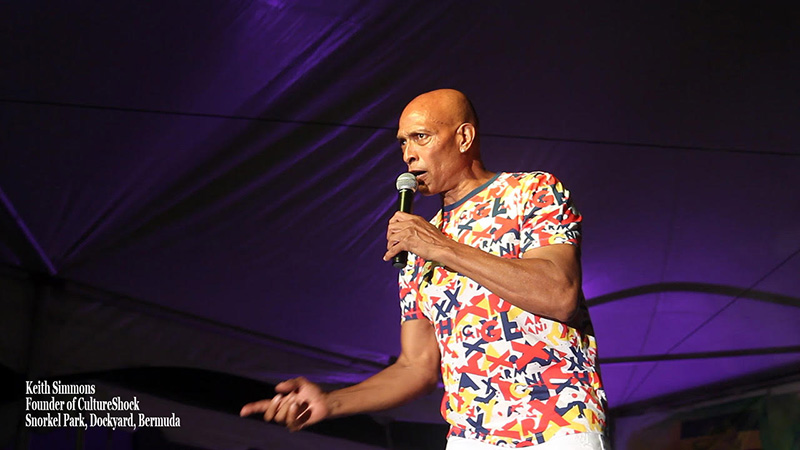 As far as this reggae music fan is concerned, the local acts could have stood on any international stage line up all by themselves. And that’s not to take anything away from the international acts.

And on top of that, this was a show that last way into the wee hours until nearly 4am finishing up with the top billed performance by Popcaan.

In hindsight, the final tally shows roughly 3,000 on the gate count, as thousands flocked to the west end that night, for a show that was jammed packed and air tight! 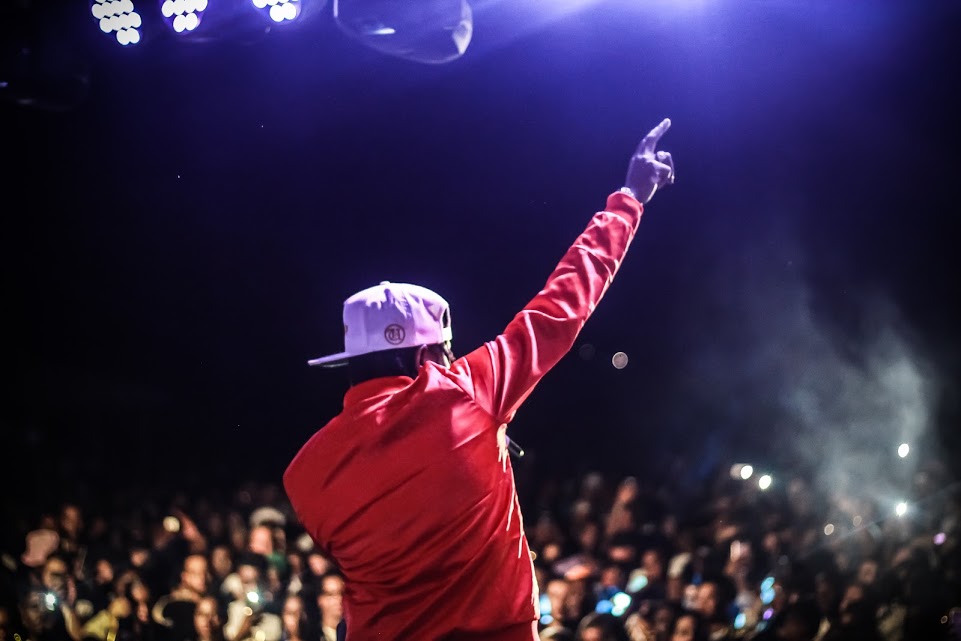 From start to finish with the line up of local DJs on lock to greet the crowds when the gate opened at 7pm th rough to 10pm when DIA Band took the stage to lead off the local acts, right through to the final act – this show was one not to be forgotten.

And we’re told that even when it was over, it wasn’t over for the VIP crew who sat in until way after 8am the morning after.

After 25 years doing what he does best, Mr Simmons admitted that he was “concerned about the numbers going into this event”. 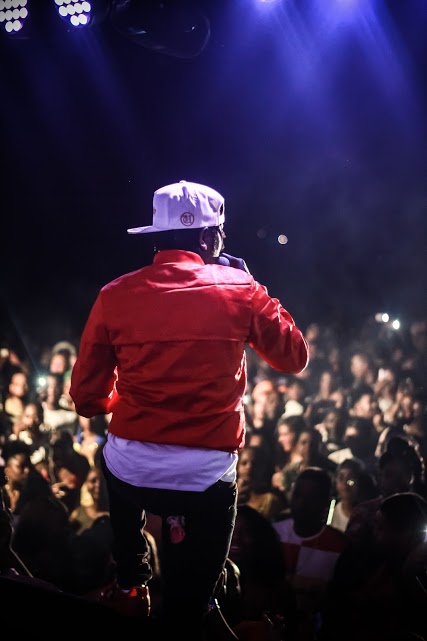 “Judging on my past experience as our island wasn’t in a peaceful place … but this time around, I felt something different in the air. And it was time to unite the youth through music.

“It was a great success  we had at least 3000 patrons who attended.”

On that note, he said: “This  was a great moment … not just for us, but to see youth enjoy themselves at an incident-free event.

“There was not one complaint – nothing but positive feedback and wanting more,” he said.

“So im encouraged to continue this movement trying to bridge the gap. We need more CultureShock, and I’m sure they will say the same thing.”

Founded 25 years ago, CultureShock fans would know that he’s been on an eight-year hiatus. And a big part of that he attributed to “unrest on the island” as a result of gun violence.
“I must admit I was very discouraged from doing this, but with family support; which made us much stronger, I was encouraged to bring CultureShock back.” 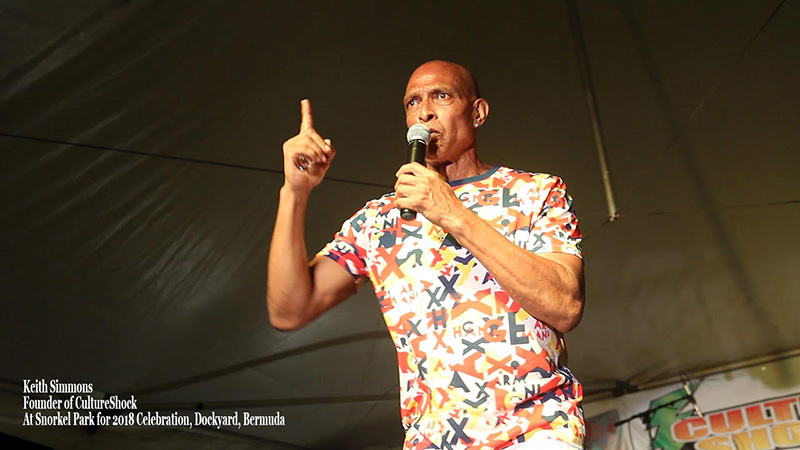 After continuously being asked when he planned to do another show, he said he reflected on what he always said. And part of that reasoning went into passing on the business of promoting big concerts in Bermuda to his youngest son Ryan.
“I won’t say I passed it on, but I’ll say it’s stronger now and in good hands moving forward,” said Mr Simmons.
“And to expect nothing but top quality artists moving forward as we will maintain our standard as as number one when it comes to live entertainment in Bermuda.”
And from start to finish that experience showed, on stage, front stage, back stage with the beach breeze setting of Snorkel Park at the Royal Naval Dockyard in Bermuda.
This was my first time seeing the DIA Band and they were absolutely fabulous! 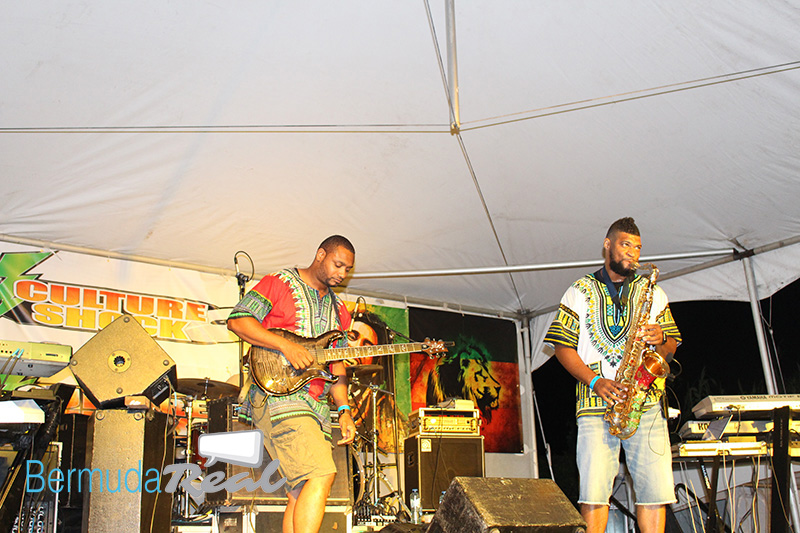 DIA stands for Devil’s Isles Audio – considering the fact that Bermuda was first known as the Isles of Devils, that may be a title steeped in history.
From the very first local artist to grace the stage, starting with Ali, then BLAC, who has a smooth voice that’s also loud and boisterous all in one! And he brings it with enough style and power.
Frankly, I was impressed with all of them, and was quite looking forward to seeing Jesse Seymour live for the first time. And I was looking forward to Jesse & Abby performing their hit RIDE even more. 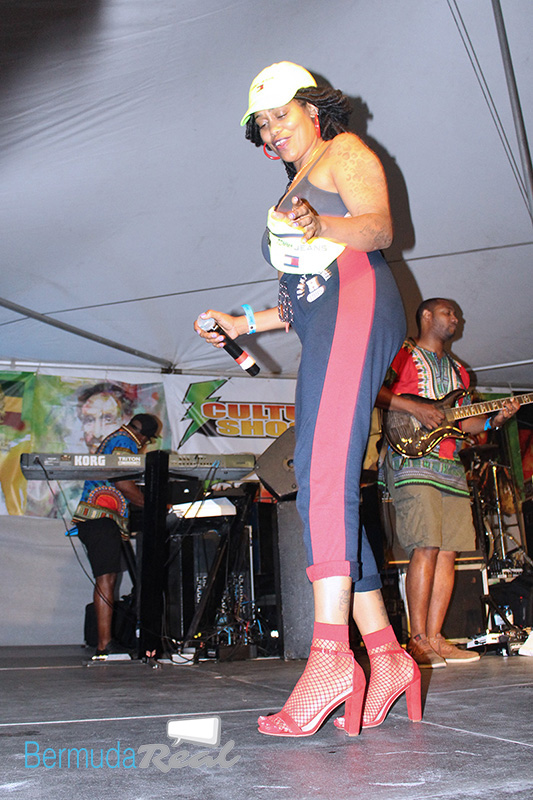 Needless to say Ms Abby took the stage by storm in these fierce red pumps – and the crowd went wild!
And then there was this young man whose stage name is General Kaution, who came out flashing bare chest and jeans rocking it!
This young brother has got big stage presence and stage power. He commands his audience and brings it full force.
And then he sang Hustla Baby with his Hustla Father, which was one of the best for the night for me! Absolutely Awesome to say the least!
When Mr Simmons took the stage at about 11:53pm, celebrating 25 years, he told the crowd that CultureShock was a “powerful movement”.
Speaking on the scourge of gun violence on a small island like Bemruda, he said: “Right now this island is in a peaceful spot and we want peace cut this bulls–t out!”
“I’m saying be humble and be real! Share in love and when you leave here tonight if it’s 3 to 4 thousand people here tonight, than you’re going tell one person we’re going keep the peace and soon it will be 10,000! 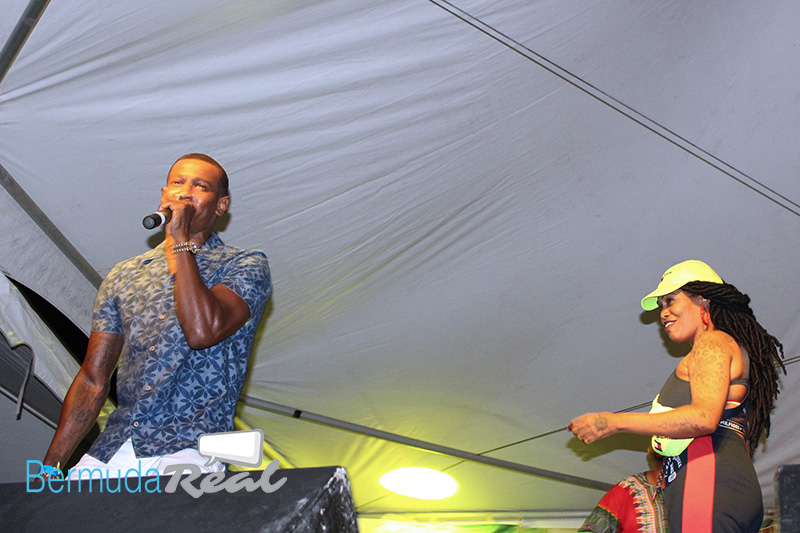 “Now we have to bless the show. To all the shot callers and ballers, we’re going have a shot and I’m telling you we can fix this s–t!
“We can do it! We have to change the mindset! And yes we can do this!”
He also sent out a special appeal for Black women to love themselves as black women.
DIA Band has been active since 2010. 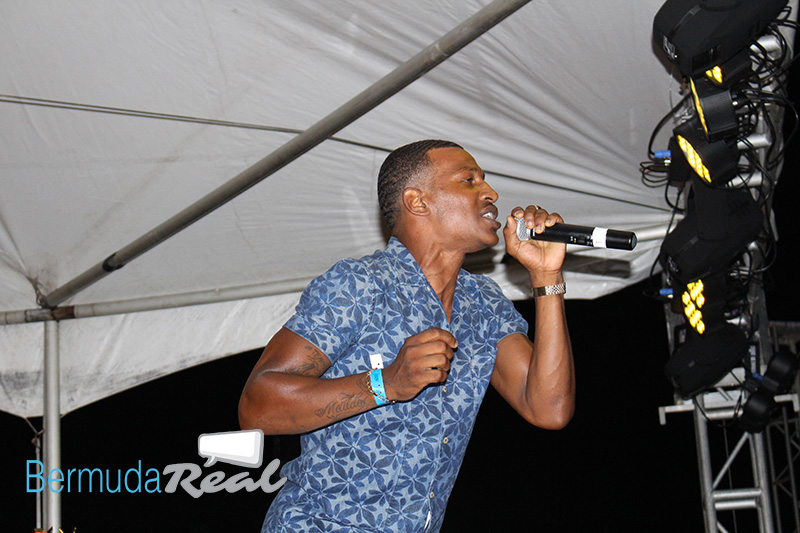 The band formed after founders Derek G Simmons and Scarlet Thomas decided to continue a showcase created by Chewstick with live music as the focus.
Over the years the group has had the pleasure of opening for Toni Braxton at the Bermuda Music Festival, backing Chewstick, and they’ve toured in New York City and Toronto with Chewstick.
Other performances include the first annual BHW 5 Star Friday Series, The Official Louis Vuitton America’s Cup Launch Party, The AC Series Jam Concert and the 35th AC Red Bull Event.
DIA has also performed at various events around the island including a few events they created on their own. 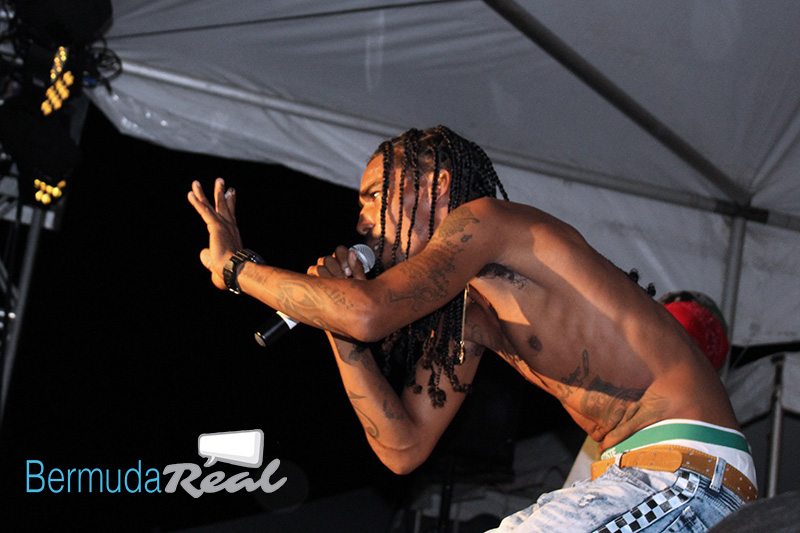 When contacted by Bermuda Real, Derek Simmons, the band’s Music Director & Co-founder, who plays bass, said overall, he thought their CultureShock 18 performance was “great”.
“We didn’t have much notice before hand but we did well considering we’ve only worked with Jesse Seymour before on various stages. The other three were working with us for the first time.
“We feel General Kaution did exceptionally well given he had performed the least out of the bunch, and it was his first time working with the band. 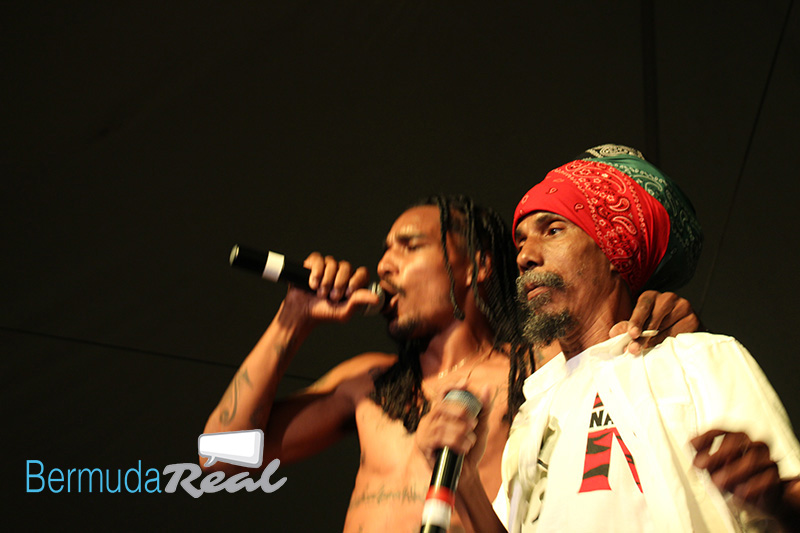 BLAC also did good given it was his first performance with the band as well.
“Jesse & C’Danger are no strangers to the big stage and live bands, so they were comfortable as usual.

“We feel it was a solid line up as they all did well with New projects and releases that were received well prior to the show so it was nice to see the hit songs translated live and we had fun making it happen,” said Mr Simmons.

Now it’s back to training twice a week to stay ready for the next event, he added.
DIA Band also performs weekly at Marcus’ on Thursday nights from 8:30pm to 11:30pm.
“Thats always a fun gig for us and its nice to give one of the best Bermudian restaurant a good energy weekly.
Asked for the reasoning behind the band’s name, he replied: “That’s a funny story actually.
“The initial title was Devil’s Isles Apocalypse. We felt it was a great title for our sound and our mindset.”
Eventually, he said they changed Apocalypse to Audio due to views held by conservative Bermuda.
“In the end it still worked out and we didn’t lose anything by changing it. Our fan base understood and all was well. 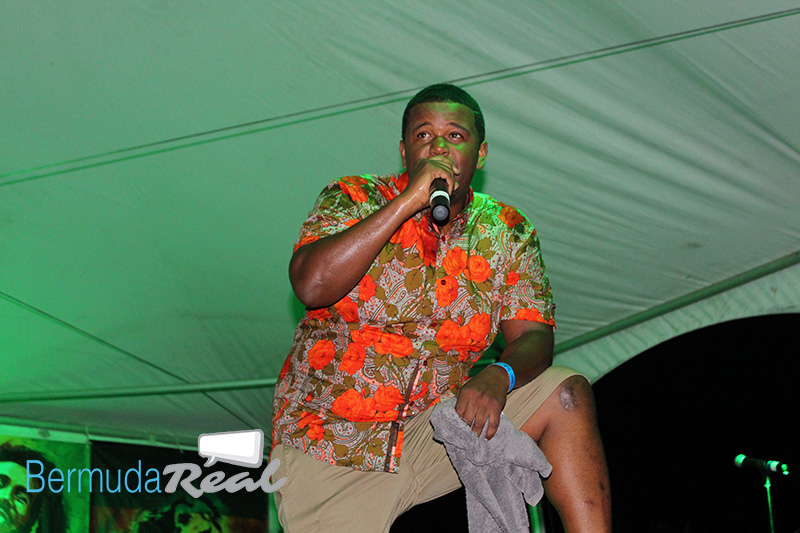 “The Devil’s Isles was never changed as it was very important to our legacy. We took on the original Bermuda title Devil’s Isles because it was the best way to describe us (Bermuda’s Original Audio/Sound). 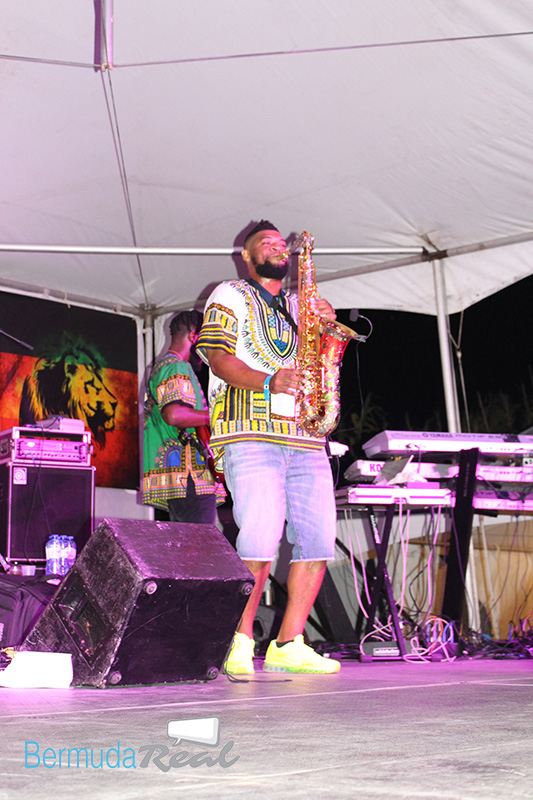 “Most people don’t know that we started our 1st 2 years playing strictly Bermudian original music. We had to adjust our set to appeal to broader crowds so we eventually drifted into adopting covers as our own to maintain the integrity of the vibe.”
All in all, he said: “DIA is a standalone band. All vocalists that work with DIA are independent artists,” Mr Simmons added.
“Anyone interested in being backed/supported by DIA can email us directly..
“Although we are a five piece band, we have several breakdowns for smaller scale entertainment events.”