Accompanied by six police officers and two St John’s Ambulance representatives, the contingent of the first-time ever full group of volunteer recruits left Bermuda on April 24th. They’re due to return to Bermuda on Saturday, May 7th.

A spokesman said Bermuda’s recruits engaged in “rifle training on the ranges and jungle warfare training for infantry, with medics working and taking classes at the military hospital at Up Park Camp in Jamaica, while the band practiced with the JDF military band and performed with them and on their own at concerts in Kingston (with JDF), Port Antonio, Portland, and at Montego Bay.

“All the separate companies got a chance to rotate through the river rafting – Monday, Tuesday and Wednesday,” he added.

On Tuesday he said: “Bermuda’s soldiers enjoyed a morning out on the water to experience a raft-up – Jamaican style.

“Troops from Support Company took a break from tough training in the heat, mud and mosquitoes of the Jamaican jungle to enjoy a raft trip on the Rio Grande river.”

The 25-year-old delivery driver from Pembroke added: “The water was nice and smooth. It’s definitely something I would do again.

“It’s a switch up from our daily work routine. It’s good to get to play tourist for a little while.”

The spokesman continued: “The soldiers joined the rafts, homemade from bamboo on site, around five kilometres up the Rio Grande and rafted down to where the waterway joins the Caribbean Sea.

“The boats stopped along the way at riverside stalls selling local delicacies and souvenirs.”

The Motor Transport specialist, a service technician at soft drinks firm Barritt’s, added: “It’s definitely been a good wind down after hustling and bustling since we got here – Motor Transport does a lot of early mornings.”

Private Tallia Zuill, 19, from Warwick, a member of A Company, said: “We stopped off along the way and it was great to see all the different food – it was nothing I’ve ever had before.”

“While Support Company was river rafting, the Royal Bermuda Regiment Band and Corps of Drums tuned up at Titchfield Camp for a concert in nearby Port Antonio after successfully completing joint training with their Jamaican Defence Force counterparts at Up Park Camp in Kingston and rifle qualification at the Twickenham ranges.

“They also performed at historic Devon House in Kingston in front of top Jamaican Defence Force officers, Governor George Fergusson and other dignitaries and will play again tomorrow (WEDS) in Montego Bay,” the spokesman added.

“The RBR musicians performed a concert just off Port Antonio’s town square – and an impromptu one in the bandstand at the Errol Flynn Marina, where their bus was parked.”

Shavanie Ford, 16, a pupil at Titchfield School, said afterwards: “It’s different from the music in Jamaica – I enjoyed it.”

And PC Elroy Brooks, who stopped with colleagues to enjoy the music, added: “It was good – the movement and the uniforms were great. They were really neat and synchronized.”

Piccolo player Adrien Lewis, 21, from St George’s, said: “It’s always nice to perform for the locals when we are away and they’re always appreciative of the show. It’s always rewarding to perform in public.”

Alto saxophone player Corporal Gary Dowling added: “Jamaica always gives us a warm welcome. There were at least 300 people at Devon House and we had them dancing in the aisles – literally.”

The spokesman noted that Bermuda’s soldiers put what they learned at Titchfield Camp “into practice in a final training exercise” after days of “gruelling jungle training in Jamaica”.

The spokesman also noted that Pte Jordan Fubler, a member of the Operational Support Unit (OSU) celebrated his 20th birthday “in the mud and mosquitoes of the Jamaican jungle”.

“This is a great experience and I’d rather be here – I like being in the field and having Jamaican Defence Force helicopters flying over. I feel like I’m really in it,” said Pte Fubler.

“The training has inspired me to go further. Instead of just giving up, you just keep going. It was interesting learning new skills and I like it here – it’s been better than I thought it would be.”

“They were taught how to live off the land, trapping, preparing and cooking animals in the wild, building shelters out of bamboo poles and branches and how to collect water using what is available in the jungle.

“The tough training prepares troops for its role as a Caribbean regional ‘blue light’ resource in the event they are needed overseas for hurricanes or other natural disasters.”

JDF jungle warfare instructor Corporal Arlie McKenzie said: “They’ve all done quite well and they’ve absorbed what was taught to them quickly.

“They are enthused – I’ve been teaching them jungle patrolling and signals and how to survive in the jungle. It’s not what they’re used to, but they have coped well.”

JDF Sergeant Roan Ellis, who has trained with the elite French Foreign Legion in jungle warfare, added: “They can’t do this kind of training back in Bermuda. “On a scale of one to 10, they’re a seven – that’s definitely good. And they’ll get better.” 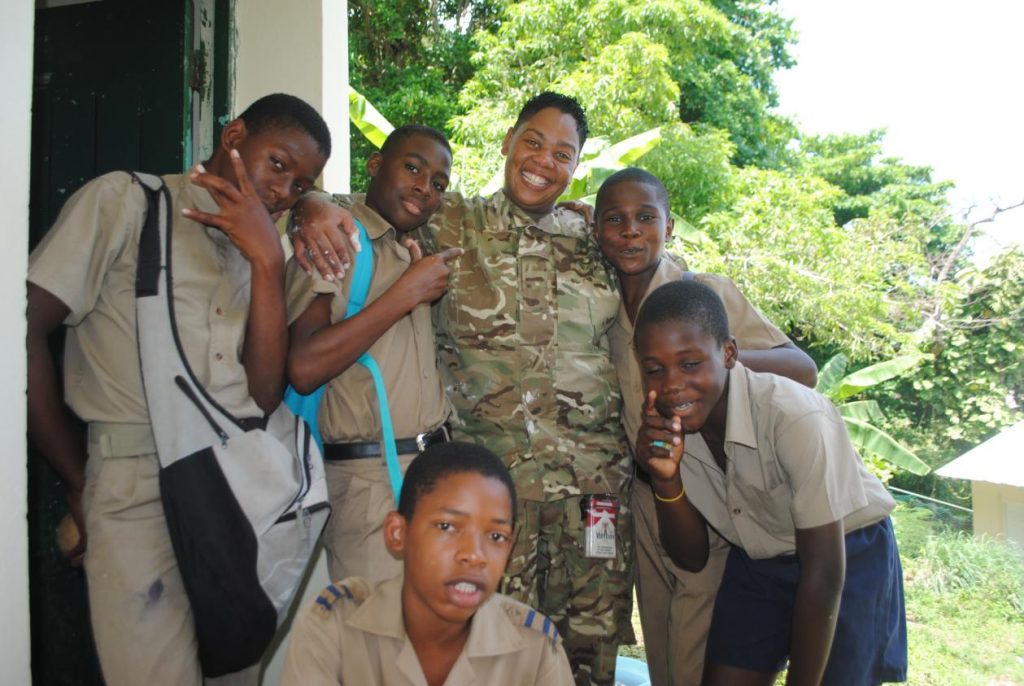 RBR Lance Corporal Dante Durham, 21, a signaller with the OSU, said: “I like the jungle. It’s been humid and there’s a lot of bugs, but it’s made us focus on survival and taking note of your surroundings.

“I enjoyed survival skills training – it might not seem like it, but it teaches you resilience and that’s all stuff you can take back home to your civilian life.”

The 21-year-old chef at new restaurant FryDays in Hamilton, added: “It’s also taught us a lot about teamwork – you really have to look out for each other in that environment.”

L/Cpl Chris Hill, second in command of an A Company platoon, said his group, many of them the RBR’s most recent recruits, had performed well in tough conditions.

The 25-year-old from Devonshire, who works in Baptiste hardware store in Warwick, added:

“The heat is taking a toll, but they’re coping with it.

“The new recruits are doing pretty well and they’ve learned a lot about relying on each other. If we ever have to deploy to the Caribbean on disaster relief, we’re ready for anything that’s thrown at us.”

Pte Leeann Mederios, the only woman soldier in the OSU contingent in Jamaica, said: “I’ve been to Jamaica on vacation, but being with the Regiment in the field is very different. It’s very hot and infested with mosquitoes.

“I’ve learned to really appreciate the natural resources available to us. It’s a good life experience to take home. We wouldn’t get all this back in Bermuda.”

The 23-year-old baker from Warwick added: “It’s made me a stronger person. I will go home feeling more accomplished.”

A large group of family, friends, and loved ones are expected to greet the RBR soldiers when they touch down in Bermuda at the LF Wade International Airport on Saturday.