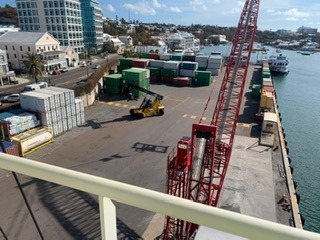 Reports reaching Bermuda Real this morning that the refrigerated containers that arrived on the Bermuda Islander last Thursday, have yet to be offloaded, as the dispute on at the Hamilton docks continues.

Meanwhile, the Oleander was scheduled to arrive on Sunday night.

As of last night, one shipping agent representative said the containers carrying perishable goods “still needs to be offloaded” and that the company he works for was inundated with calls on the status of their goods all day on Monday.

A quick check with a few grocery stores indicated that staff charged with stocking shelves and produce were left with nothing to stack because no imports were delivered, although essential cargo was unloaded.

Bermuda Industrial Union President, Chris Furbert was scheduled to hold a news conference at 12 noon on Monday. But shortly after the notice was sent out, the media was told that the conference was “postponed until a later time”.

The dispute centres around the union’s divisional president at the docks who was suspended for five days from last Thursday, after workers held a meeting that the company said was unauthorised.

At last check, Warren Jones, the Chief Executive of Polaris Holding Company, the parent company of Stevedoring Services said a resolution had yet to be reached after dock workers downed tools on Thursday.

No word yet on when the union’s news conference will be held, which may or may not be later today.

Partial Road Closure On Ewing Street For Repairs Next Week