News Release: WARWICK, Bermuda – The island’s armed service mobilised on Friday to meet the threat posed by what is expected to be Hurricane Paulette.

More than 80 troops, including three Immediate Response Teams, have been called up from Sunday to bolster the response to the storm.
RBR Adjutant Major Duncan Simons said: “Our mission is to provide immediate response, reassurance patrols, command and control and clear the roads so essential workers and the other emergency services can move freely.” 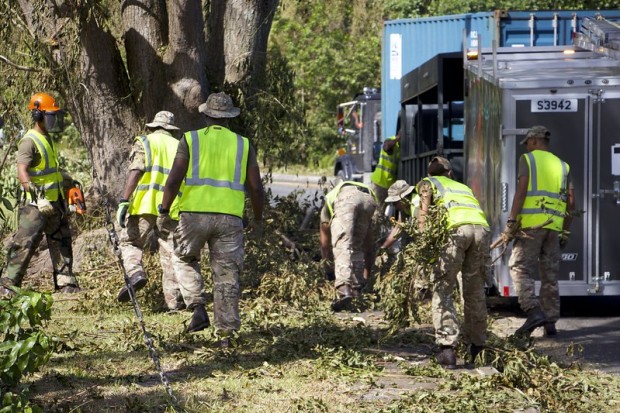 One IRT team will be based in the East End of the island at the old NATO hangar, with two others at Warwick Camp to cover the central parishes and West End.
Other RBR soldiers will be called up for service with the Bermuda Coast Guard to provide security on the water.
Maj. Simons said the island’s soldiers were ready to respond, despite having just completed its longest embodiment since World War Two because of the Covid-19 crisis.
He added: “We are able to cope – which underlines the resilience and adaptability of our soldiers. They are extremely committed.
“For many of them, they’re not fully employed at the moment, so it gives them extra work. It’s in many ways the best second job in Bermuda. They can earn money by performing an invaluable service to the country.”
Maj. Simons added that the Recruit Camp scheduled to start on Sunday had been postponed for a week so Warwick Camp could be devoted to the hurricane response.
He said: “Anyone interested in joining the RBR should contact us – there may even be a limited number of places available on the delayed Recruit Camp.”
Logistics specialists will also be on duty at Warwick Camp to support the soldiers on the ground and the service’s Operations Room will be stood up over the hurricane recovery period.
Maj. Simons said: “We have many years of experience in dealing with hurricanes and we are sure our soldiers will respond as they always have – with discipline, dedication and a ‘can do’ attitude.”