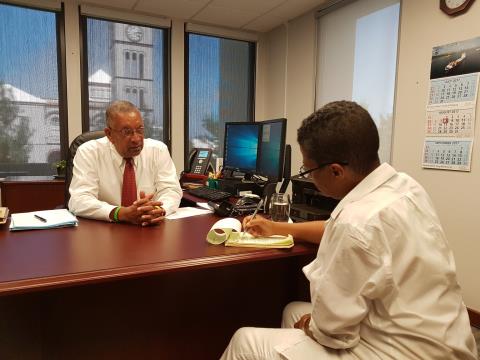 Tasked with the huge Ministry of Public Works, the new Minister, back for a second time within the last decade, has stepped in with a new motto that simply states: “Business as usual just won’t do!”

The first order of business for Colonel David Burch, was to obtain a list from all department heads of all the “critical, urgent and routine issues”. What he found may astound you.

For instance, of the 23 garbage trucks used to collect garbage, 13 were out of service as of July. According to Col Burch, that has everything to do with the number one problem in the Ministry of Public Works.

“We’re crunching the numbers, but at the same time there’s a freeze on hiring but there are posts established that are funded. We had a three-hour presentation and now we’re having individual meetings to look at staffing and what posts need to be filled that will have the most dramatic impact on productivity.”

Asked what the list of top issues looks like, he replied: “Garbage collection!” With 13 trucks out of service he said: “That means the collectors have to make more than one trip and it means overtime. Then some of the larger trucks cannot go up some of the narrow lanes and some of the smaller trucks are out of service.

“There has to be a more methodical approach to maintenance,” said the Minister. “We have mechanics who have retired who were not replaced, and there’s also an issue with parts for repairs. So now we have our mechanics looking at recommendations.

“I also think we produce too much trash for a small island and we’re looking at how we can reduce garbage. We’re also looking at transition spots to offload garbage and not have our collectors come all the way back to Tynes Bay.

“And the Tynes Bay hours are inconvenient, they open at 9am, which is no good to anyone who would like to take their own garbage in before they go to work. They should be open at 7am, so we’re looking at changing shifts.”

Another big change in the works is the plan by this Minister to make recycling mandatory in Bermuda.

“I think recycling should be mandatory, and I’m looking to do that soon because part of the recycling plant that we have is underutilised. We make revenue off of our recyclables when they’re shipped out of here.

“This is a huge ministry with a whole lot to do and my new motto is business as usual just won’t do! Some people forget that this is my second time as Minister of Public Works, I was here about a decade ago,” he said.

This Ministry is also responsible for the Bermuda Housing Corporation and the Hustle Truck programme, which Col Burch would like to expand to help people where they are with employment, and then work to develop their skill sets with on the job training.

“I want it expanded because it’s needed so it’s not just a hustle, but an opportunity for unskilled individuals to become skilled workers. We have to use our own resources as opposed to outsourcing.”

He also believes there are those in a position to hire people who subscribe to the belief that Bermudians are lazy and don’t want to work.

“Yes there are Bermudians who are lazy and don’t want to work, but you cannot paint all Bermudians with a broad brush with the same story, or that same narrative. This unemployment situation transcends race. I talked with several white people in my constituency, who are unemployed and they are skilled workers.”

Asked for his views on the state of Bermuda’s roads, he said: “The roads are terrible, especially for people like me who ride a bike – you hit certain sections and it’s terrible!

“There’s a schedule for road repaving and I’ve asked to see it. I’m looking into regulations for companies that dig up the road so they put it back the way they found it. I want to know what’s the rules, whether they need to be amended and enforce them.

“The good news is that the asphalt plant is fully operational, which is a testament to Bermudian technicians. But the condition of our roads is horrible!”

He also noted that one of the first emails he received came from his newly appointed colleague regarding the brown water problem plaguing residents in the pre-fab units in Devonshire North West.

“Those houses were built by the Bermuda Housing Corporation and there are homeowners involved. It is my view that the problem must be fixed once and for all. The cast iron pipes must be replaced and I don’t think it should be piecemeal, so we’re looking at that.”

Making sure that the island’s public schools are ready for students in September is another top priority.

“The three worst schools are Dellwood, TN Tatem and Harrington Sound Primary School. We have 36 schools altogether with the exception of Berkeley Institute and CedarBridge Academy. As it stands now we are on target,” said Col Burch.

“We have a mandate to hand them back over to the Education Ministry for final preparations on August 16th, when they will send in their custodians. The biggest problem is mould and the quality of the air and water is another top priority.” But he said the current system of annual maintenance and repairs during the summer is “not good enough”.

“Coordination must take place during the course of the year between the technicians in both ministries to address the issues when they happen. Our main goal right is to have the schools ready and then we’ll work out a long-term plan.

“All of the school buildings are old and there’s mould in all of them. At some point we have to map out a new school infrastructure plan. But the focus has to be on raising the level of education,” he said.

“The main issue at Dellwood is mould which required us to go outside of the Ministry to address it. That was approved and we have three contractors working on it now with a limited time frame. They started two weeks ago and this week I will visit the school with the principal. With limited resources our aim is to divert some of the resources we have to address these issues.”

The second worst school is TN Tatem, where the overall maintenance is on schedule. Meetings were also held with Angela Young, who reached out to parents via social media to organise volunteers to help get the schools ready. A mass meeting will be held soon to coordinate that effort with the Education Ministry.

As for Harrington Sound Primary School, which was infested with bird mites, he expects that school to be ready as well.

“They had to seal up various areas of the roof, but I’m encouraged,” said Col Burch. “We’re not out of the woods yet, but we are still on target to have all the schools ready by September 11th when they re-open.”