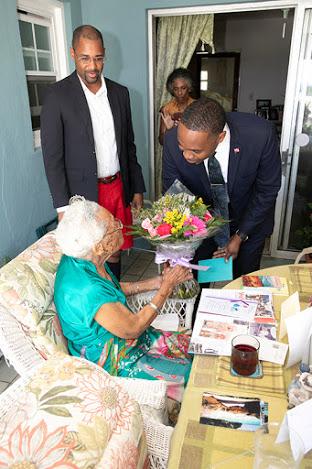 Joined by MP Lawrence Scott, the Premier presented Mrs Edness with flowers and a gift.

“I was delighted to spend some time with Mrs Edness and her family yesterday as she celebrated her 105th birthday. This is a true milestone and I wish her many more beautiful days to come,”said Premier Burt.

Born on July 17, 1914 on Ord Road in Paget, Mrs Edness attributes her longevity to a love of salt water and loquats.

Her bio, provided, stated that “she describes herself as a bit of a wild child”.

“When she was a young woman living on the South Shore in Warwick she would pop off for a swim every morning before going off to work, even if she had to swim at 6am.

“She spent her 99th birthday swimming at Clearwater Beach.”

Mrs Edness “is the daughter of Gerald and Adulcie DeShield. She had two siblings, an older sister and a younger brother Gerald”.

“When she was little the family moved to Mangrove Bay in Somerset. Her father was a pilot on the Somerset Ferry, and he also did ‘gigs’ piloting large ships into port.”

Her bio continues: “They lived next door to Finley’s Meat Market and behind the Bank of Bermuda building.

“She can remember hearing the clink of coins counted when she went for a nap in the afternoon. Later, they moved to Warwick.

“She was nine-years-old when she started school at Paget Glebe. The school cost one shilling and sixpence to attend. She and her siblings had to walk a mile every day, to and from school. Sometimes they would catch a ride on a passing cart.

“Miss Adele Tucker, the school headmistress, read articles from the newspaper to the children every morning. In this way Myrtle began a bit about the world beyond Bermuda.”

Before that she said: “I did not concern myself with anything except climbing trees to collect loquats and cherries and other tasty berries.

“Maybe that is why I have lived so long and managed so far to stay healthy,” she added.

Her bio noted that Mrs Edness “did well in school and the teacher tried to convince her father to let her go to The Berkeley Institute”.

“Her father, however, was upset that her older sister hadn’t also been encouraged to attend the school, and for that reason rejected the offer.”

She also worked at The Recorder, where “she set type, delivered advertising proofs to local businesses and also frequently pedaled all the way to Somerset to collect money owed to the newspaper”. 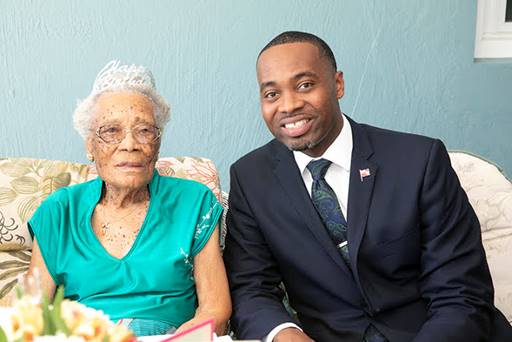 On September 25 in 1944, she married “her neighbour and childhood friend”, Arnold Edness, “who was a carpenter and a contractor in the construction business”.

The young couple moved to Billy Goat Hill in Warwick, where Mr Edness “built their own home”.

“They were married for 33 years and had two children, Alan in 1947 and Maureen in 1949. After her children started school she operated AJ Edness Grocery Store in Warwick for 29 years, retiring in 1978.

Her bio also states: “In her younger days, belonged to the Socratic Literary Club.

“Today, her hobbies include reading, doing puzzles, weekly outings and attending church services. Up until 2018 she enjoyed swimming of course.

“She previously took music lessons with Lloyd Matthews and played in a couple of recitals. Her favourite was ‘Ode to Joy’.”

Mirrors & Department of Parks, Partner to Sustain Clean Up Effort at Southlands