Premier David Burt pledged to deliver a Budget that “would focus on those who for the last five years have not been a priority”, when he unveils his first fiscal plan for the next fiscal year on February 16.

Speaking at a news conference on Thursday, he said: “Our aim is simple and that is to grow Bermuda’s economy and ensure that the benefits of that growth reach all persons in Bermuda, and not just a select few.”

The Pre-budget Report will be backed by consultation to gauge public feedback, through a series of meetings starting with the international business sector and union members.

Budget options contained in the report, now available on the Government website, include a possible tax hike on cell phone fees, including the 2.5 percent Government Authorisation Fee imposed on the telecoms industry.

A tax may also be levied on commercial rents, with possible exemptions for businesses in Economic Empowerment Zones.

The Government is also considering implementing an amnesty on penalties for late payment of taxes to facilitate settlement of payments and increase Government’s collection rate.

The General Service Tax put forward by former Finance Minister Bob Richards has been scrapped this year. But the proposed Professional Services Tax remains possible, although it would be limited to legal and accounting services and other consultancy providers. 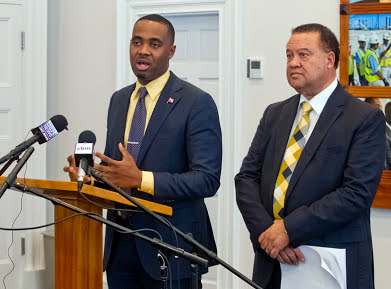 The new administration also looks set to carry over the proposed policy by the former One Bermuda Alliance government to cut payroll tax for lower-income workers.

But higher taxes on Bermuda’s international business sector, which contributes 27 percent of the island’s gross domestic product may not be likely.

Mr Burt and Junior Finance Minister Wayne Furbert will hold a public forum on Tuesday, January 30, at the St Paul Centennial Hall, followed by a public forum. And members of the public are invited to submit their input via email to openbudget@gov.bm.

In his media statement, the Premier said: This Progressive Labour Party will focus on the people who for the last five years have not been a priority.

“Our aim is simple, to grow Bermuda’s economy and ensure that the benefits of that growth reaches all persons in Bermuda and not just a select few.

“We have to put in the work now, by investing in Bermudians, and training our young and not so young people in the skills they will need for tomorrow’s economy. We will encourage entrepreneurs, providing them with the support needed to start or grow their businesses to create greater economic empowerment.

“And we must look for companies who want to invest in Bermuda. We must make ourselves not only marketable, but competitive in the global arena, and shift our paradigm to explore innovative opportunities in technology and put real effort into diversifying our economy. Finally we must use technology to make government more efficient.

“With this in mind, we want to establish a clear and transparent Budget process.”

Mr Burt continued: This Government wants to hear from the people of Bermuda. We want to hear your thoughts and your concerns.

“We want to know what you like about the Pre-budget Report, what you want to see changed and what you would like to see more of.”

Three meetings will be held within the next few weeks, including a meeting with members of the international business community today.

Another meeting will be held at noon on January 29, at the Bermuda Industrial Union for union members, with members of the Bermuda Public Services Union.

“It is important to hear from the public officers who carry out the day to day work of the government and this meeting will provide union members with an opportunity to ask questions and make suggestions.” said Mr Burt.

And a public meeting will be held on January 30 at St Paul’s Centennial Hall at 6pm.

The Premier added: “We will give a presentation and open the floor to suggestions, comments and recommendations.

“Once the consultation period has ended on 31 January, we will evaluate all responses we have received as we finalise this new Government’s first Budget.”

He concluded: “The goal of the 2018 Budget will be to ensure that all Bermudians benefit from our economy’s success while we grow Bermuda’s economy.

“We want to hear from you. So take a few minutes to read the Pre-budget Report, come to the public meetings and share your thoughts.”