Premier David Burt today extended his “heartfelt sympathies” on behalf of the people of Bermuda to the residents of the islands devastated by Hurricane Irma throughout the Caribbean and others still facing this ferocious storm labelled one of the strongest ever.

The Category 5 hurricane packing wind speeds up to 185mph with gusts even higher, swept through norther Caribbean islands on Wednesday leaving a trail of destruction and fatalities in its wake.

Forecasters predict Hurricane Irma will eventually reach Florida and other nearby states, where aggressive evacuation plans are now underway.

“On behalf of the Government and people of Bermuda, we extend our heartfelt sympathies to our neighbours in the Caribbean islands devastated by Hurricane Irma and those bracing for impact,” said Premier Burt.

“Our sincere condolences go out to the families of those killed during this enormous catastrophe.

“The death, destruction and devastation across the Caribbean is massive, and the heart wrenching images of areas that have suffered total destruction are very saddening to me, my fellow Bermudians and I am sure to the rest of the world.

“While Bermuda may not be situated in the Caribbean we share a connection and a bond. A large percentage of Bermudians can trace their roots back to the Caribbean, and our Caribbean connection is still very evident here. Today, we feel their pain, as we are all family.”

The Premier noted that he has reached out to “the leaders of the affected overseas territories to offer any support we can”.

“We will be assessing our resources to determine what we can provide and how we can best assist the territories affected,” said Mr Burt. “In consultation with the Governor, we will look to deploy the Regiment overseas once we are certain Hurricane Jose is not a potential threat to Bermuda and their presence is not needed on island.

“We are in contact with the Bermuda Red Cross with the intent to collaborate our support relief efforts to assist those impacted by Hurricane Irma,” he said.

“We will continue to pray for those who have been impacted by Hurricane Irma and for those who are still in the path of this powerful storm.”

Meanwhile, new satellite imagery distributed by the National Oceanic and Atmospheric Administration (NOAA), shows “the unusual sight” of three hurricanes spiraling in the Atlantic all at the same time.

The NOAA released photos on Wednesday showing Hurricanes Irma, Katia, and Jose, including the photo featured with all three storms depicted in the same image.

One published description of the image, distributed by the NOAA’s National Hurricane Center in Miami said it “provides an awe-inspiring look at Mother Nature’s power and the vulnerability of all the land in their paths”.

Similar photos put out by others including NASA show all three hurricanes “spread across a couple thousand miles of ocean”. 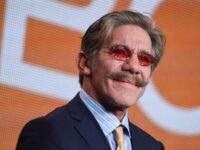 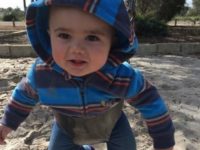 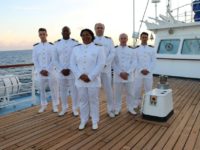 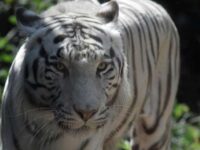 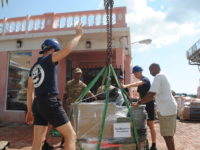