Reflecting on her passing, Premier David Burt said Dr Hodgson was “an incisive voice for change” in Bermuda.

“In clear and unmistakably honest terms, Dr. Hodgson told the story of Bermuda and the impact of its tortured history of race relations and economic inequality,.

“Her intellect was devoted to enlightening and inspiring generations of Bermudians to not repeat the mistakes of the past but to strive for a better society in which race was no barrier to success,” he said.

“On behalf of the Government and people of Bermuda I express my sincere condolences to her family and especially her beloved brother, former Minister the Hon Arthur DO Hodgson JP.”

One Bermuda Alliance Leader Craig Cannonier said: “Dr Eva Hodgson will be recorded by history as one of Bermuda’s leading social rights campaigners.

“In particular, history will highlight her tireless efforts to achieve social and economic parity for black people.

“She was generous with the time she gave to me, always willing to talk politics and always prepared to help and guide. In addition, some OBA MPs knew her many years ago and were guided by her.

“I would like to offer my sincere condolences to Dr. Hodgson’s family. While they will mourn her passing, I hope they can also celebrate a life spent helping others.” 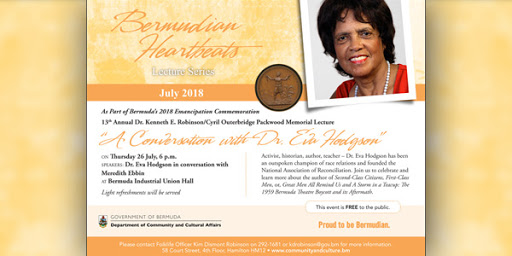 OBA Deputy Leader Leah Scott added: “It is often said that prophet has no honor in his own country. So it can be said of Dr Eva Hodgson.

“Although we met and talked on occasion, I did not know Dr Hodgson well. The last time I saw her was in July of 2018 at the Bermuda Industrial Union headquarters, where she was honoured in the annual Dr Kenneth E. Robinson/Cyril Outerbridge Packwood Memorial lecture.

“There was standing room only, with people filling the hallways of the BIU to come to have ‘A conversation with Dr Eva Hodgson.

“A film created and directed by Milton Raposo of Method Media, was shown, followed by an interview with Dr Hodgson by Ms Meredith Ebbin. One would not believe that Dr Hodgson was 93 years old. Her wit was in fine form, and her energy and zeal was unmatched.

“As founder of the National Organisation for Reconciliation, Dr Hodgson stated that she had spent a good part of her life addressing the racial divide and, that in 2018, she did not see that, as a country, we had made much progress. In her remarks, Dr Hodgson called on the Government of the day to have courage, determination and true commitment. to proceed with ‘pushing unabashedly affirmative-action policies.’

“In 2011 Dr Hodgson was awarded an OBE for her commitment to addressing racial inequality. In 2018, she rightfully determined that little progress had been made in terms of racial or addressing economic disparity. Here in 2020, economic equality and racial equality are all but pipe dreams and that is being viewed in real time on the world stage as protests enter into their fifth day, in respect of the inhumane senseless killing of George Floyd in Minneapolis, Minnesota.

“Dr Hodgson’s life was an active demonstration of what she called on us to possess and live out – courage, determination and commitment. Well done to Bermuda’s good and faithful servant.” 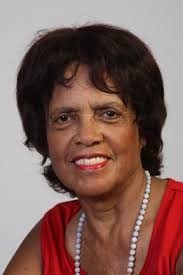 “I’m pleased to have been taught by her then to have worked with her as a colleague at Robert Crawford Secondary School where we started The Oral History Movement and later produced the second edition of her book “Second Class Citizens First Class Men” and published the first book on the 1959 theatre boycott, “A Storm in a Teacup”. May she rest in peace. My condolences are extended to her whole family.”

The Progressive Labour Party offered condolences to Dr Hodgson’s family and friends and said she was “a fierce advocate for racial equality”.

A spokeswoman said: “She was also a fierce critic of organisations and governments that she felt did not do enough to advance the cause of racial equality.

“We celebrate the contributions that the venerable Dr Eva Hodgson made to our island home, and we celebrate her life and all she gave to Bermuda.”

Dr Hodgson was appointed an Officer of the British Empire in 2012 for her work.

A former geography teacher at the Berkeley Institute, she was also the first President of the Bermuda Union of Teachers.

She held a doctorate in African and Black American History and a recipient of a national research fellowship to do field research in Liberia, Africa.

In 1983, Dr Hodgson was seconded to the Department of Education to help document and preserve Bermuda’s oral history and introduce human rights into the curriculum for social science and civics.

Dr Hodgson also founded the National Association of Reconciliation and documented the island’s struggle for equal rights in her book ‘Second Class Citizens, First Class Men’ and the historical account of the theatre boycott in 1959, ‘A Storm in a Teacup’.