Hamilton, Bermuda: Monday, February 11, 2019 – Following public consultation throughout 2018 regarding the future of Bermuda’s municipalities, a policy document has been created for consideration by the public.

The document, posted on the Government of Bermuda Citizens Forum (forum.gov.bm), invites the public to comment on the two options which Government is currently considering as they move forward with reforming the municipalities in order to ensure their growth and development – a 2018 Throne Speech Initiative.

The two options are:

The Consultation period for this will run from February 12 until February 22.

“It must be recognised that the City of Hamilton and the Town of St. George play a critical role in the economic health and wealth of Bermuda,” explained the Minister of Home Affairs the Hon. Walter Roban JP MP. “The City of Hamilton is the engine that feeds the life-blood of Bermuda’s businesses. Meanwhile, the Town of St. George is the historical and cultural centre of Bermuda. Both cities must be rejuvenated into becoming vibrant entities in order to attract more visitors and greater investment opportunities for our island and its people. At present, both entities have crumbling infrastructure and empty buildings that do not reflect a thriving city and town that is attractive to both visitors and investors.”

The public may recall that, in March of last year, an Act was passed in Parliament to defer ordinary municipal elections for a year (until May 2019), to allow the Government time to consult with the Corporations of Hamilton and St. George as well as the residents and ratepayers in each municipality; and then determine the most appropriate method to strengthen and modernise governance of the municipalities for the benefit of Bermuda.

Following this consultation, the Government has produced a clear vision for the two municipalities:

For the City of Hamilton, the vision is a “smart city” infrastructure with a thriving residential centre and entertainment hub with distinct districts to touch all aspects of city living, including a tourism interface.

In order to achieve this vision, the following needs must be met:

For the Town of St. George, it is envisioned that there will be a mega-yacht port and marina with enhanced infrastructure, amenities and activities.

In order to achieve this vision, the following needs must be met:

“At present the municipalities are responsible for mainly infrastructure,” said Minister Roban. “The available evidence suggests that neither Corporation has the financial and other means to achieve and sustain the vision to rejuvenate the cities. It is also evident that Central Government has greater access to the resources and expertise needed to achieve the vision.” 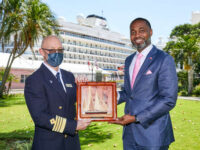 Premier on Purchase of Victoria Hall by Arbitrade