A 50-year-old American visitor from New York, collapsed and died while sightseeing near the Unfinished Church in St George’s this afternoon.

Police and medical responders were dispatched to the scene around 3:30pm.

Relatives and members of the public tried to assist until help arrived.

The man was rushed to King Edward VII Memorial Hospital by ambulance, where he subsequently pronounced dead.

A police spokesman said no further information will be released until his next of kin has been notified. 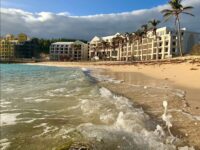