The Bermuda Police Service can confirm that following this morning’s shooting incident, police officers executed a warrant at a residence on Peat Lane in Pembroke.
Three people were taken into custody, however two were released at the scene.
The third individual was arrested, but has since been released on police bail.
Earlier today, a police spokesman said: “Reports are two men wearing dark clothing rode into the area on a dark coloured motorcycle.
“One of them got off the bike, ran to one of the nearby Bermuda Housing Corporation apartments and fired several shots into one of the units.
“The suspects then made good their escape.
“Upon arrival officers recovered forensic evidence which confirmed a firearm was discharged outside the residence. There have been no reports of any injuries,” he said.
“This is the fifth firearms incident in the last two weeks and there is growing concern over the indiscriminate nature of these crimes which could have resulted in loss of life of individuals who were not the intended target.”
The BPS is appealing for anyone with information on this morning’s shooting incident, in which a gunman indiscriminately fire several shots into a residence on Fieldview Lane in Pembroke, to please contact Detective Inspector Kenten Trott on 717-2344, the independent and Confidential Crime Stoppers hotline, 800-8477, or the main police number, 295-0011. 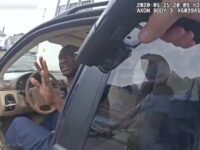