Police have confirmed the death of 49-year-old man Marco Bowen, who tragically lost his life following a fatal crash on at Barkers Hill roundabout on North Shore in Devonshire yesterday.

A police spokesman said the driver of a second vehicle was been arrested. Mr Bowen was riding a motorcycle which was involved in a collision with a water truck.

The accident occurred around 5:30pm on Monday, as both vehicles were negotiating the roundabout at the junction of Barkers Hill and North Shore Road.

The spokesman added: “The driver of the water truck, a 32-year-old man believed to be from Paget, has been arrested on suspicion of impaired driving.

“The investigation regarding this fatal collision — the tenth of the year — continues and any witnesses that have not already come forward are encouraged to contact Constable Roger Fox of the Roads Policing Unit on 717-2004 or via his e-mail rfox@bps.bm at the earliest opportunity,” he said.

Road Safety Council Chairman, Dennis Lister MP, extended condolences “to the family and friends of the individual involved in the road collision yesterday”.

“Our thoughts are with them during this difficult time,” he said.

The Barkers Hill roundabout is a frequent accident spot where there have been two other fatal collisions in the area over the past ten years. 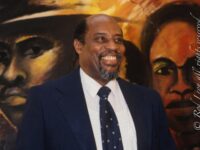