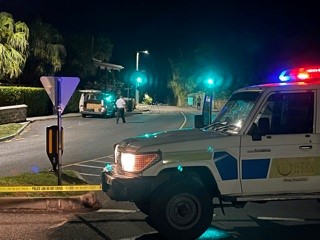 Police are investigating the sudden death of a man who was found in an unresponsive lying in the street in the Blue Hole Hill area around 2:20am this morning (Sept 16).
A police spokeswoman said someone called 911 to report “an unresponsive male lying in the eastbound lane of Blue Hole Hill, just east of the Swizzle Inn Restaurant, Hamilton Parish”.
“Officers attended the scene and immediately commenced CPR on the male prior to the arrival of EMS personnel,” she said.
“The unidentified male was eventually transported via ambulance to the King Edward the VII Memorial Hospital, where he was pronounced dead a short time later.
“Police have commenced an investigation into this incident and anyone with information is asked to call 211 or the main police number 295-0011,” she added.
“The east and west end of Blue Hole Hill were temporarily blocked off while the scene was forensically processed.

“The roadway has now been opened to one-way traffic into and out of St. George using the westbound lane.

“Uniformed officers remain at the scene and motorists are advised to use caution when approaching the area.”