Police arrested a male driver on suspicion of driving under the influence of alcohol, following a single vehicle accident last night, that ended up with the “vehicle caught on fire”.

A spokesman said the accident occurred just before 8pm on Sunday (November 29) near the junction of Middle Road and Tee Street in Devonshire.

Police and Bermuda Fire and Rescue (BFRS) were dispatched to the scene of the accident.

“The car reportedly struck a wall near the junction before it came to a stop a short distance away, west of the junction,” the spokesman added.
The vehicle caught on fire and the driver was subsequently arrested on suspicion of driving whilst impaired.
“Traffic had to be diverted from the area while BFRS dealt with the fire and staff from the Department of Public works cleared the roadway which was reopened around 10:15pm.
“Anyone with information on this incident is asked to call 211 or, the main police number, 295-0011.” 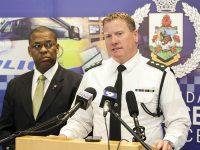