Police are investigating a reported late night robbery that occurred at Maxi Mart on Hog Bay Level in Sandys around 11:40pm on Tuesday night.

Police say the lone suspect entered the store “brandishing a bladed article” demanding money. But he was unable to get any cash “and made good his escape with a quantity of tobacco and cigarette papers”.

The spokesman added: “No one was hurt during the incident. Police officer searched the surrounding area for the suspect, but he was not located.”

The suspect was said to be a man wearing dark coloured who stands approximately 6 feet 4 inches tall of slim build.

Inquiries continue and any witnesses, or persons with relevant information are asked to contact the Criminal Investigation Department on 247-1744 or the independent Crime Stoppers hotline 800-8477. 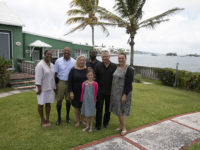