The 26-year-old local man arrested in connection with a fatal boat crash that claimed the life of a New Zealand woman has been “released on police bail with strict conditions”.

In the latest update, a spokesman said police have spoken with several witnesses. They have also collected CCTV footage as the investigation continues.

The man was arrested shortly after the accident that claimed the life of 62-year-old Mary Elizabeth McKee on suspicion of operating a watercraft while impaired. He subsequently passed the alco-analyser test. Police have not said whether or not a blood sample was taken to test for other substances.

A preliminary autopsy has been conducted and the results of the forensic overview are pending.

Meanwhile, the victim’s husband, 69-year-old Arthur McKee, and a 26-year-old British man who were also on board the 9ft Zodiac were listed in stable condition on Sunday. Mr McKee was expected to be discharged, but the young man from the UK “will be airlifted overseas for further medical treatment”.

Police also renewed the appeal for any witnesses who have not come forward – particularly anyone with video footage of the scene of the accident immediately following the collision – to contact Senior Investigative Officer Acting Detective Chief Inspector Dave Greenidge on 247-1744 or the independent and confidential Crime Stoppers hotline on 800-8477. 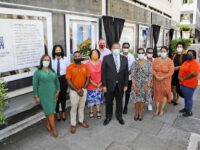