The Bermuda Police Service (BPS) tonight confirmed the death of 52-year-old Collins Smith, who tragically lost his life after being involved in a single vehicle collision, on Black Watch Pass in Pembroke.

A police spokesman said: “Initial reports suggest Mr Smith was travelling south on his motorcycle, when apparently he lost control of his vehicle and hit the curb. He was subsequently taken to the hospital where he was later pronounced dead.”

“Last evening, Bermuda recorded another road fatality. Earlier today I reached out to family members of the gentleman who died and expressed the condolences of the Premier and the entire Cabinet. Our prayers and thoughts are with his family and friends at this difficult time,” said Mr Roban.

“As a government and as a community we must work together to increase safety and reduce the number of deaths and serious injuries on Bermuda’s roads.”

While extending sincere condolences on behalf of the BPS, to the family and friends of Mr Smith, the police spokesman also urged anyone who may have witnessed this collision, or anyone who may have information regarding the movements of Collins Smith prior to the collision to contact PC Oswin Pereira on 717-2360.

A Family Liaison Officer has also been assigned to the family to assist during these difficult times. 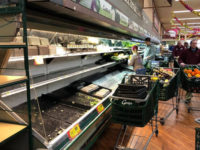