Eight months after police pepper sprayed protesters outside of the House of Assembly on December 2nd, the report by the Police Complaints Authority is due to be released on Friday.

This from the Minister of National Security, Wayne Caines, while speaking at a news conference at the Cabinet Building yesterday.

Asked for an update, Mr Caines said: “We should have the report in the public domain by the close of business on Friday of this week.” The contents, he said, will be released in due course.

More than 20 complaints were filed by members of the public, who were pepper sprayed by police while protesting against the multi-million dollar airport redevelopment project. Fourteen police officer alleged that they were assaulted as well.

Protesters blocked access to the House of Assembly in a bid to stop MPs from passing the legislation facilitating the new airport. The Bill, piloted by former Finance Minister Bob Richards, was ultimately passed after One Bermuda Alliance MPs, led by former Premier Michael Dunkley snuck into the Sessions House at 5am. 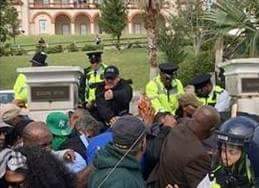 The one report released to date, a review by Assistant Chief Constable Chris Shead of the National Police Co-ordination Centre in Britain, found that local police officers were not suitably trained to deal with “unexpected levels of determination”. Essentially, Mr Shead said the actions taken by police on December 2nd last year were doomed to fail.

Since then, court cases drawn against several union leaders and members, including Chris Furbert, Jason Hayway and People’s Campaign advocate, the Reverend Nicholas Tweed, were abandoned by the Director of Public Prosecutions Larry Mussenden, with the exception of two cases.

On of the defendants in those two cases was given a conditional discharge to keep the peace for six months for hitting a police officer with an umbrella. The other defendant, Edmund Smith, 52, remains in prison for striking a cop with his walking stick. He was sentenced to one year in prison in May for assaulting Inspector Scott Devine during the protest by Magistrate Archie Warner.