Police are still trying to track down the driver of a car involved in a two vehicle accident, who fled the scene before officers arrived to find an injured motorcyclist.

The good news – at least the driver checked on the injured man before he fled on foot.

Police say the accident occurred around 2am on Friday, January 10 on North Shore Road in Pembroke, near the junction with Black Watch Pass.

A spokesman said: “It appears that a car was being driven west along North Shore Road and a motorcyclist was travelling in the same direction behind the car when the driver, said to be a 30-year-old Pembroke man, attempted to make a U-turn.

“The car driver checked on the injured rider, said to be a 31-year-old Pembroke man, before fleeing the scene – apparently on foot.

“The 31 year-old-man was transported to King Edward VII Memorial Hospital via ambulance for treatment of a leg injury.

“So far attempts to locate the car driver have been unsuccessful but inquiries continue,” he said.

“The car driver involved – as well as any witnesses – are encouraged to contact Constable Daischon Chin on 247-1704 or e-mail dchin@bps.bm at the earliest opportunity.” 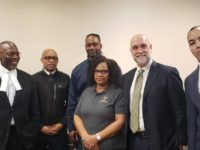 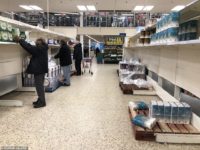