A 32-year-old woman is today listed in stable condition in the hospital’s Intensive Care Unit, following an early morning car crash that occurred on North Shore Road in Hamilton Parish around 2:15am this morning.

Police and first responders were dispatched to the scene of the serious single vehicle accident near the junction with East Point Lane.

A spokesman said: “It appears that the car involved was being driven west along North Shore Road when it crashed into some trees and overturned.

“The front seat passenger, said to be a 32-year- old woman, sustained multiple injuries after apparently being ejected from the vehicle.

“She was transported to King Edward VII Memorial Hospital via ambulance for treatment and at last check was listed in stable condition in the Intensive Care Unit.

“The driver, believed to be a 30-year-old Smith’s Parish woman, was not seriously hurt and later arrested on suspicion of impaired driving.

“Traffic diversions were in effect for approximately three hours while the scene was processed.”

Meanwhile, iInquiries continue and any witnesses are encouraged to call the main police telephone number 295-0011. 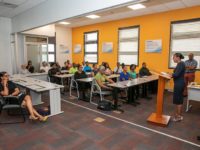