Newly elected Progressive Labour Party MP for St George’s South, Tinee Furbert gave her personal insight on life’s struggles to fight against the odds to champion the cause of Bermuda’s disabled.

In a moving and timely maiden speech on the floor of the House of Assembly on Friday night, Ms Furbert told MPs that despite the odds and many obstacles along the way, she knows that she was “put on this earth to fight”.

“Civil fighting is not a bad thing as it can bring us through some great obstacles as it did on July 18th,” she said.

“It can be very emotional, but emotions are not bad either it is how we interpret them, allow them to affect us and how we react to them.”

She noted three significant occasions – the United Nations International Day of Persons with Disabilities recognized today on December 3rd, the pepper spraying of protesters outside the House of Assembly on December 2nd last year and the Mindframe exhibit being showcased at the Bermuda Society of the Arts at City Hall which runs through to December 12th, which is an exhibit of art work by persons with mental disabilities.

Collectively, she said those three events represent “Life is a fight” – fight on! While noting that earlier this past week she found herself feeling “weary saying I don’t feel like fighting anymore” because it’s “still early days”, she said: “There are two physiological reactions our bodies offer and that is fight of flight.”

On that note, she reflected on the challenges she encountered along life’s path.

“My journey through life has not been without a fight, with ups and downs like many, they say your life is your best teacher. And I have been taught many things; my mother’s love was everlasting despite her depression and addiction.

“Depression was what she developed from her experience of being abused as a child and a young lady not feeling worthy enough, addiction was her coping mechanism,” Ms Furbert said.

“Her children were her first love and mind altering drugs became her second but disguised as her first, stability became more and more important to me as I grew older as I hated moving house to house because the rent was not being paid, having your hard earned summer employment money stolen from you with the suspect helping you look for it. Me and my sisters had guardian angels surrounding us.

“I had applied to college when I knew I did not have access to funds, but was blessed with enough funds through scholarships and loans to start and complete college. I had to take 26 semester hours one semester to meet prerequisites to get into an occupational therapy program. I was one of the three Black students in a class of 40 to graduate from Springfield College’s Occupational Therapy Program in 1999.

“At the tender age of 24 I had to take in my sisters when my mother said she couldn’t do it anymore and I fought for the resources my sisters needed to succeed. In March 2016 during that most dreadful Pathways to Status week, I lost my mother to cancer, but she would be so proud to know, people stood on that hill representing people like her.

“She would be even more elated to know her daughter is now the first occupational therapist to serve as part of the legislature in Bermuda.

“You see I don’t have a lifeline of politicians in my family, but I have been surrounded by humanitarians. I did not grow up with family discussions of politics, our political affiliations were kept an untold story. So politics didn’t matter to me much growing up but people did. People from all different backgrounds with different stories and abilities as we were all made special and amazingly.”

Personally, she said that she considers herself “a doer and less of a jive talker” as her actions “were part of the formula to the victory of Constituency 4. And on that note she thanked “all the constituents of St George’s South who participated in the election” and found her “worthy of their selection”.

She thanked “all the constituents, party members and parliamentary colleagues” who “encouraged and helped” her to “pound the pavement to connect with people:.

“To my executive branch members, in laws Mr and Mrs Furbert, my children, my husband, my godmothers, my family and friends and my sisters, thank you for your support. I owe my sincerest gratitude to you, you were and are my support system,” she added.

She also thanked the Premier “for acknowledging persons with disabilities by being a leader and providing a direct contact in our legislature to disability affairs”. 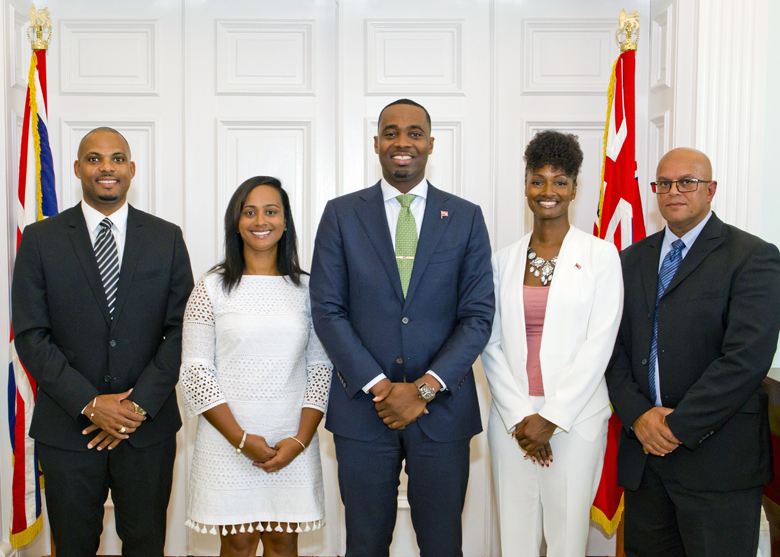 She also reflected on a recent tour with two young men with disabilities with the hope of getting them to attend Bermuda College.

“Our initial contact was to tour the grounds to assess accessibility and resources needed for their success should they meet the entrance requirements,” Ms Furbert said.

“It was great to have them around their peers again and to feel a sense of inclusion as they were greeted by past friends and listened to the contemporary music of the college grounds. They both felt at the end encouraged, the college campus was much more accessible and accommodating than I thought and maybe today they are in a different place. But those two young men needed a resource, someone to lead and guide them on that day.

“It was amazing to truly witness the ‘power’ of a power wheelchair to give mobility.” But she said: “Yes there is more work to be done.

She noted that it was not unusual for her to see students with disabilities on a college campus because “that was a norm”. But she said: “I have heard from many people with disabilities in Bermuda, who are discriminated against for job or learning opportunities or people in our community who feel they are not worthy of inclusion when they can’t even interpret the local evening news because there is no closed caption, or they are not afforded the opportunity for an interpreter to help them communicate their needs to a police officer.

“I have heard from parents of children with disabilities who are excluded out of decisions being made for their children when they should have every say. And I have heard from people saying access to entrances and exits of buildings or homes keep them captive.”

The theme for today’s International Day of Persons with Disabilities is ‘Transformation towards sustainable and resilient society for all’.

“The 2030 UN Agenda pledges to ‘leave no one behind’. Persons with disabilities, as both beneficiaries and agents of change, can fast track the process towards inclusive and sustainable development and promote a resilient society for all,” said Ms Furbert.

“It is my hope Bermuda can move in this same way. Bermuda has made significant movement in the awareness and movement of persons with disabilities. never fast enough for my liking, we still have so much work to do. I would be remiss to not raise that it was this government who made a concerted effort to:

“You see disabilities are not going away whether someone’s disability is temporary or acquired in youth, middle age or senior age, it will affect us sometime across the life span,” said Ms Furbert.

Whether it’s “autism, cerebral palsy, down syndrome, Parkinson’s, a stroke, a motor vehicle injury, blindness caused by diabetes, dementia, ADHD, dyslexia, schizophrenia or addiction to name a few:, she said people with disabilities are “consistently” excluded.

“It baffles me every time when persons are referring to human rights they consistently include race, sex, religion and now sexual orientation but the consistently exclude disabilities.

“I want us to get in the habit of including disabilities and not in ways that I have witnessed in this House by calling fellow House mates slow, retarded or hearing impaired. I do not take that language lightly, in fact I find it very offensive to those whom through no fault of their own experience cognitive disabilities or ARE hard of hearing.

“To event those who consistently park in disabled parking bays right on these very House premises, STOP IT! People with disabilities want and deserve respect and acceptance. Imagine living your whole life with challenges, being disregarded or feeling less than.

“We must value those with disabilities as valuable members in our society as they open eyes and make life better for everyone else. how many of you used the elevator today?

“We need to continue to enhance the quality of life for persons with disabilities and we can do this by:

“More importantly, creating legislation for Disability Rights – right now accommodations are made out of the kindness of people’s hearts but people aren’t always kind, we have to tick that box that says ‘must’ and NOT ‘should,” she said.

While thanking all those “who have fought and continue to fight for persons with disabilities”, Ms Furbert concluded: “It is my hope that we will one day have a Bermuda where we are no longer in the category of ‘not’ available in your country. But we have to fight to get there.”