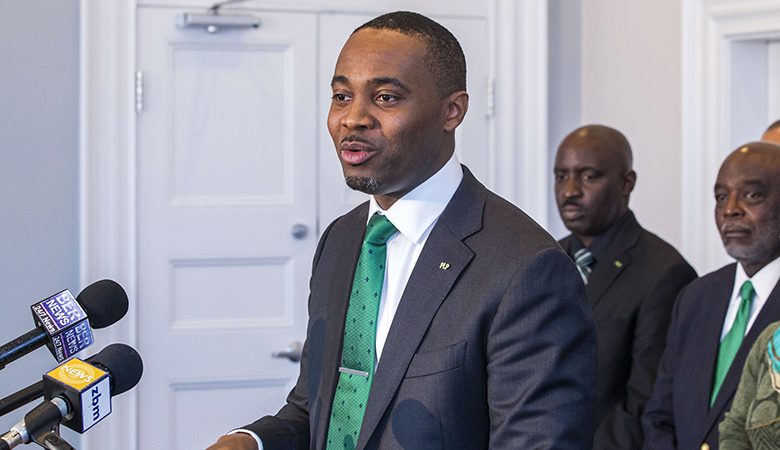 ♦ The following statement was released by PLP Chairman Damon Wade today, Saturday, November 17, 2018
The Party congratulates the Premier on releasing another sensible, balanced, and ambitious Throne Speech for the upcoming legislative session.
In particular, we welcome the positive response 2018 Throne Speech has received from a broad spectrum of the island; such as from the Chamber of Commerce noting that the speech ‘’was right to focus on people caught in the gap between income and expenses’’ and the Coalition for the Protection Children noting the Government’s ‘’clear commitment to dismantling systems of inequality through several restorative initiatives that include lowering energy and healthcare costs, mortgage relief and tax reform’’.
In July 2017, the PLP was elected on a platform to make a better and fairer Bermuda for all. The Throne Speech is in keeping with that platform and the overwhelming mandate received at the polls.
The 2017 platform set out to: Put our children first; Provide tools and opportunities for Bermuda’s workforce; Promote an economy that works for all Bermudians; Reduce racial tension; Assure quality and affordable healthcare; Give seniors the quality of life that their sacrifice deserves.
The PLP said they would put children first and by increasing maternity leave we will help lay a strong foundation for families from the beginning. Additionally, by implementing a Unified Family Court and Mediation Centre, we will be able to better assist families in crisis.
Through amendments to labour legislation to strengthen protections for employees, this Government will improve the workplace environment for its citizens. By introducing a merit-based ‘College Promise,’ this Government will help provide tools and opportunities for Bermuda’s workforce.
This Government guarantees to reduce mortgage costs and repayments and also eliminate stamp duty on any mortgage refinancing under $750,000 which will help provide mortgage relief. Furthermore, this Government will introduce a progressive tax on energy consumption and focus on energy renewal.
With an emphasis on addressing inequality, this Government is actively working to reduce the racial tension that has permeated our country.
The attention on reforming social insurance contributions to one based on a percentage of income is part and parcel of this focus. By advancing a national health plan to reduce the cost of health insurance, this Throne Speech highlights our focus on assuring quality and affordable healthcare. This Throne Speech signals our continued focus on giving seniors the quality of life that their sacrifice deserves.
We must also not lose sight of where we have come from. And on that note, it is fitting that we also recognise the work of a Party stalwart who sacrificed much and contributed plenty to realising a better and fairer Bermuda.
To this end, we salute the honouring of Brother Ottiwell Simmons by naming the new arbitration centre (to be built at the site of the old Hamilton Police Station) after him.
The people of Bermuda can be assured that the PLP Government is deeply committed to delivering the promises made on the doorstep and will continue to work tirelessly towards this vision.
The Party looks forward to the continued support of the people as we work together in building a better and fairer Bermuda and the next chapter in the country’s development.