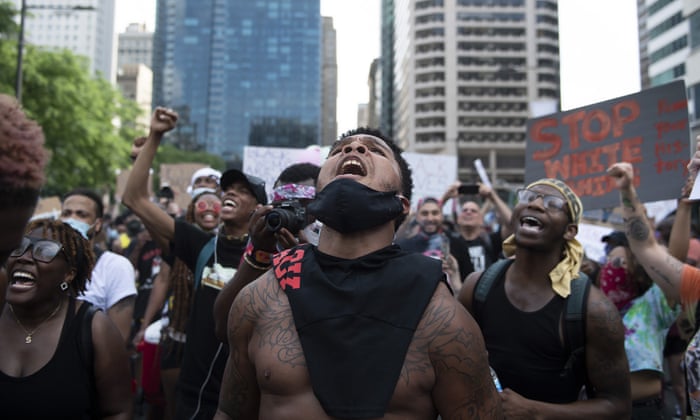 The Guardian, UK: Sunday, June 7, 2020 – Hundreds of thousands of Americans took to the streets, in big cities and small towns, from coast to coast, marking one of the the most expansive mobilizations yet in the nationwide protests against police violence and systemic racism sparked by the police killing of George Floyd in Minneapolis.

Demonstrations, now in their second weekend, were largely peaceful – and included moments of levity and jubilance. It was a notable shift from the weekend prior, when police beat back demonstrators with force, using teargas and pepper spray to suppress the unrest.

Mourners paid their respects to Floyd in North Carolina, his birthplace and final resting place. Hundreds filed past his coffin, lining up outside Free Will Baptist church in Raeford in the searing heat to say a last goodbye.

In Minneapolis, where Floyd was killed, marchers asked city officials to defund the police, a rallying cry at protests across America that has begun to gain concrete pledges. The city council voted on Friday to ban officers from using chokeholds and neck restraints, but Mayor Jacob Frey would not commit to defunding the police. “I do not support the full abolition of the police department,” Frey told protesters. They responded by booing him away, chanting “Go home, Jacob, go home” and “shame”.

Demonstrators chanted “get off our necks” and “racism is America’s original sin” as they marched uptown from the National Black Theatre in Harlem. Pastors and other faith leaders gave rousing speeches outside the theatre and other celebrated spots, including the Schomburg Center for Research in Black Culture – an internationally renowned archive for information on people of African descent.

“Harlem is extremely significant when it comes to talking about the disproportionate impact on black and brown communities of so many things – for example, Covid-19 and police surveillance,” said Jacquelyn Martell, 33, one of the protest organizers.

“But part of this movement is to bring communities together and ameliorate divisions brought forth by systemic racism and bring some healing as well.”

Although the White House remained fortified behind newly erected metal fencing, there were markedly fewer tanks and heavily armed federal officers around the city – following widespread outcry over the presence of militarized law enforcement over the past week.

The words “Black Lives Matter” had been painted in bright yellow letters along a street near the White House, where just days before protesters were brutally dispersed by using teargas so Trump could have a photo op in front of a church. Nearby, demonstrators painted an additional message on the streets: “Defund the police.” Trump, who has threatened to send in the military to quash demonstrations, tweeted on Saturday to praise various branches of law enforcement.

Among the Philadelphians who rallied on Saturday were members of the 76ers basketball team and a couple who married amidst the demonstration.

In Louisville, a city mourning the police killing of Breonna Taylor and  David McAtee, the civil rights leader Jesse Jackson called on lawmakers to pass an anti-lynching law and eliminate protections for police officers from lawsuits.

Thousands of demonstrators flooded on to San Francisco’s Golden Gate Bridge with the acquiescence of authorities. Tow trucks held off car traffic in both directions, and police directed vehicles caught in the middle of the bridge to go around protesters.

In Denver, players and coaches from the Broncos football team joined a march from the state capitol to Civic Center Park downtown. “Your voice is heavy, and it matters,” the fifth-year safety Justin Simmons told the crowd. The NFL in 2016 sidelined Colin Kaepernick – the former quarterback of the San Francisco 49ers – for leading protests against police brutality. But as more players spoke out following the killing of Floyd, the NFL commissioner issued an apology.

Protesters in Denver were also joined by a brass band on the first day of protests since a federal judge ordered police to cease the indiscriminate use of chemical weapons and projectiles against peaceful protesters.

Officials have also ordered police to scale back the use of teargas, which public health experts warn could exacerbate the spread of coronavirus, in Portland and Seattle. “Our community has serious concerns about the use of CS gas for crowd management, particularly during a time when we’re battling a pandemic,” the Portland mayor, Ted Wheeler, said in his statement on Saturday.

“Gas should not be used unless there is a serious and immediate threat to life safety, and there is no other viable alternative for dispersal.”

Jersey City police did not wear riot gear and a peaceful atmosphere prevailed though the sweltering afternoon. Protesters handed out water and snacks, and nearly the entire crowd wore face masks. Demonstrators chanted the names of people killed by police in recent weeks, including Floyd and Taylor, as well as “no justice, no peace”.

Curfews, which civil rights experts said give officers broad leeway to arbitrarily and unequally violate protestors rights to free speech, were also lifted in most of California, Dallas, San Antonio, and Atlanta. But they remained in place in many US cities, including New York, where two police officers were suspended without pay after being filmed inflicting violence on protesters. One officer was caught pulling down a demonstrator’s mask before dousing him in pepper spray.

Demonstrations have sprouted far beyond the US. Saturday brought the largest protest in London thus far, where thousands braved the rain to meet in Parliament Square. In France, hundreds of Parisians gathered in defiance of a ban on large protests.

The week had seen incremental victories in the Floyd case, with charges announced against three former police officers who were present at his death, while charges against the officer who knelt on his neck were elevated to second-degree murder. In Minneapolis, marchers were joined by the US congresswoman Ilhan Omar. “The Minneapolis police department is rotten to the root,” she told the crowd, “and so when we dismantle it, we get rid of that cancer and we allow for something beautiful to rise.” 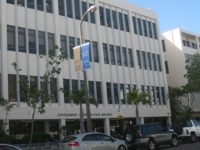 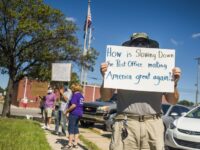