Daily Mail Online: LONDON, England – Passengers flying into the UK today faced ‘bedlam’ at the borders with some facing a three hour wait – with some left standing next to Red List arrivals.
Heathrow travellers have told Mail Online how they were  “terrified of catching COVID” while being crammed into the airport’s border hall this morning. Some even claim they were left standing next to arrivals from COVID-ravaged India while in the three hour long queues.

The chaotic scenes at the border come as figures show Britain’s daily coronavirus cases have fallen by 16 percent in a week while deaths remain steady.

Department of Health statistics show there were 1,979 new infections in the past 24 hours, down on last Monday. A further five fatalities were registered, one more than the same time last week.

Thousands of Britons today rushed to the airport to leave the country after the international travel ban was lifted this morning.

Passengers have been taking advantage of at least 340 flights from Heathrow and Gatwick that Mail Online has identified to destinations in the medium-risk category. They included nine flights to Rome, 21 to Paris and 26 to New York – on what is expected to be one of the busiest days of the year for British airports.

But as thousands jetting off to the likes of Portugal joined orderly queues in the departures area, those in arrivals faced chaos at the border.

One of those stuck in the queue in Terminal 2 at 10:40am yesterday told Mail Online: “I arrived back in the country from South Africa – one of the Red Listed countries. I was more terrified catching COVID while going through border control than walking around South Africa.

“While queuing there was no social distancing we had a plane from India arrive straight after ours and we queued for over three hours and when their plane arrived it was out the door.”

As the coronavirus lockdown was further eased today, it emerged: 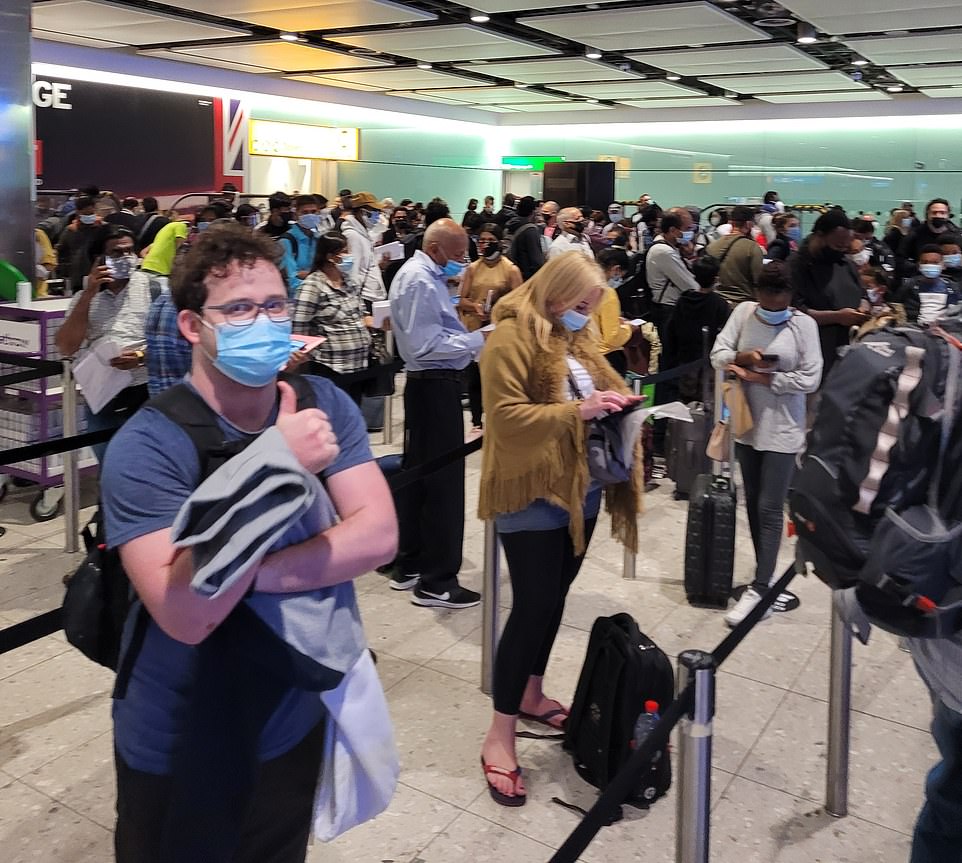 Heathrow travellers have told Mail Online how they were ‘terrified of catching Covid’ while being crammed into the airport’s border hall this morning. Pictured: Passengers queue at the Heathrow border hall

New York-based journalist Steve Myall was one of those caught up in the Heathrow arrivals chaos this morning, having gone through Terminal 5 after flying in on American Airlines

The reporter, who came from ‘amber listed’ America, documented his experience on Twitter – saying in one post how he had been forced to sit next to a family from a red list country. He said: ‘Have arrived in Heathrow. Been told to join the one hour plus queue and also that the fast tracking of families with young children is on hold.

‘Asked to go and sit somewhere while one parent queues up we’ve been directed to sit with a family who have just arrived from a Red List country.’

He later claimed that just 10 of the 35 Border Force desks were being staffed when he went through around 6am today.