The Ministry of Transport has confirmed that the first of the long anticipated four new buses has been shipped and will arrive in Bermuda this month, with the others due to arrive in the ensuing months.

That was two years ago, as first reported by Bermuda Real in 2016, on the transaction that was made in 2015, when former Public Transportation Board Director, Dan Simmons, who is now retired, was told not sign off on payment by high ranking government officials. 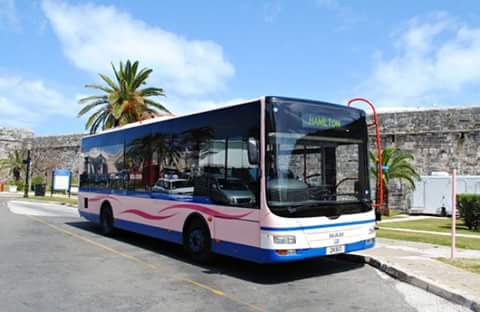 When first published, a spokesperson said the Ministry was “aware of some inconsistencies in respect of outstanding bus deliveries” and that they were “working with various entities including the Attorney General’s Chambers to ensure that issues are dealt with in an appropriate manner”.

“Given the nature of this matter it would be inappropriate to comment further,” he added. But he confirmed that legal steps are being taken to track down the taxpayer money paid to the man in Belgium, who disappeared with the cash.

When asked for an update in June 2017, he said: “It is a legal matter and steps are being taken pursuant to Belgian law.” But he declined to say what exactly those steps are, or give any insight on the status of any progress made to date on the transaction.

At this point in time, years later, it’s clear that the money – all $300,000 of it is gone, the buses are still not here and it’s not likely that we’ll ever see that money returned to the public purse, with no action against whoever was responsible for it.

Two weeks ago, on December 19th, the Ministry issued a statement on preparations to transport school students in the new term.

A Ministry spokesman said: “Morning and afternoon commuter (or revenue) runs that incorporate school bus routes will be prioritized starting next week (last week of December 2017), as the Department of Public Transportation (DPT) continues to work with the limited number of buses available.

“While the emphasis will be on accommodating primary and middle school routes, the regular runs will also be available to senior school students. Unfortunately, dedicated school buses cannot be offered at this time,” he said.

“Circumstances will improve as new buses arrive (starting in January with others to follow and existing buses in the fleet are overhauled. An RFP for the fleet replacement is being drafted and is being reviewed prior to issuance. This is a longer term project that will be undertaken as budge allows,” he added.

That translates into continued breakdowns and cancellations, and with only one bus due to land on island this month, any change in that situation is highly unlikely either with one new bus or four.

As for the minibuses being used to transport school students back and forth to school, when asked by Bermuda Real what’s the latest on that, he said: “The minibuses were approved for use only until the end of 2017. This has not changed.”

That too, translates into more taxpayer money being spent to pick up the slack left by an ageing bus fleet – in other words – more money!

Asked what’s the plan moving forward in light of the extended cruise ship season this year, and the fact that the Breakaway will be replaced by a sister ship, the Breakaway Escape, which carries approximately 500 more passengers than Breakaway, he said: “DPT buses were not chartered last summer to transport cruise visitors from Dockyard.

“Lift was provided by a mix of taxis and minibuses. We will keep an open brief on the subject and make adjustments as necessary,” he added.

Before the 2018 cruise ship season gets underway, it would be prudent for DPT officials to consider the ongoing plight of west end residents who are left standing on east or west bound bus stops waiting for a bus, only to watch them go by filled to capacity with cruise ship passengers. And that’s just the west end – not the residents islandwide left stranded daily!

At one point, the Ministry added buses that left Dockyard from the Prison Officers Recreation Club heading east to pick up the slack. Whether that plan will be continued this season remains to be seen.

And there are those who would suggest that the public transportation system, particularly buses, cannot handle the current load – not to mention a new cruise ship that carries even more passengers. In terms of visitor arrivals, ultimately this is a good thing for Bermuda’s economy. What it means for the people who live here – that’s another story.

Either way, it is a story that will continue in the year ahead – how it all will pan out – only time will tell.

In the interim, the good news is, with the advent of social media, at least now bus users can “bookmark the bus scheduling pages on the government portal, or, subscribe to receive bus cancellation notifications by email”. And that’s what the DPT is encouraging you to do.

What’s the bottom line on this latest chapter in the ongoing saga of Bermuda’s ageing bus fleet – get used to it!

And don’t bother trying to flag down one of your new Government Ministers in their GP cars – all that’s for them – NOT YOU!

It may be a good idea to have the new Cabinet and all civil servants park their tax paid vehicles for at least one week and have them stand on bus stops to wait for a bus, paid for at the taxpayers expense, that never comes.

In this reporter’s humble opinion – that would speed up the solution real quick!

Ceola Wilson – Keeping it Real on Bermuda Real and a special shout out to Bermuda’s bus operators who bear the brunt of the criticism and frustration daily! Happy New Year!