Police have arrested one of three suspects in connection with a smash and grab robbery yesterday at Vera P Card in St George’s.

The incident occurred at about 11:30am on Wednesday when three men entered the east end jewellery store and smashed a display case and stole jewellery.

A police spokesman said three men entered the store and smashed the store case with blunt objects. All three left the scene on foot.

One man was been arrested shortly after the incident as the investigation continues.

Anyone who may have witnessed the incident or may have information that may assist is urged to contact the Criminal Investigation Unit on 295-0011. 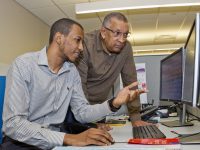