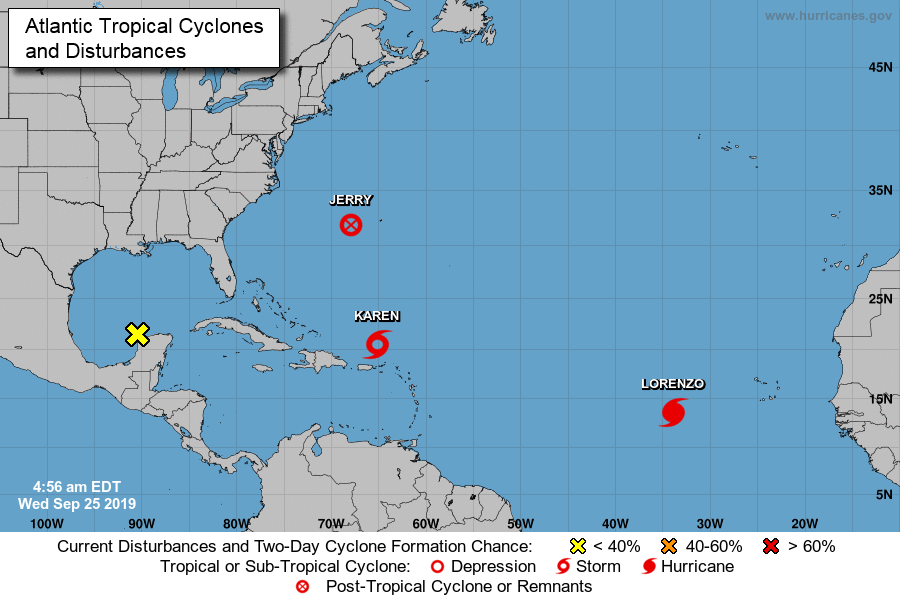 As of 5:30am Wednesday morning, Tropical Storm Jerry had slowed down slightly and was still weakening as it bears down on the local area.
Forecasters at the Bermuda Weather Service (BWS) say the storm will bring strong southerly winds, “increasing to tropical storm force at times with showers”.
“A thunderstorm or two is possible this evening as well as dangerous surf and rip tides. As Jerry moves away, Tropical Storm Karen is a potential threat, though high pressure building to our west will likely hinder it’s northward progress,” the BWS added.
Meanwhile, the National Hurricane Center (NHC) said “large swells” are expected later today. These swells could cause life-threatening rip currents along the coast of Bermuda over the next few days.

The good news, Tropical Storm Jerry weakened overnight and continues to do so as it moves closer to Bermuda.

The NHC said: “The hurricane center is expected to pass near the island on Wednesday — which will make it the second time in a week Bermuda has had to deal with a tropical system.

As of 10pm Tuesday, Tropical Storm Jerry was located about 235 miles west-southwest of Bermuda and was moving north-northeast at 5 mph, with winds at 45 mph, which is down from 65 mph on Monday.

“It could become a post-tropical storm in the next day or so,” the hurricane center said.

“A tropical storm warning continues for Bermuda, and the center of the storm is forecast to pass just to the north of the island on Wednesday.

“Jerry could bring 1 to 3 inches of rain to Bermuda through Wednesday as well.”

DPT On Bus Operator Attack: Violence Has No Place In Our Community