National Security Minister Wayne Caines announced today that conscription will be abolished, once and for all, within the next few months.

Speaking at a news conference this afternoon, the Minister told members of the media that putting an end to compulsory service in the Royal Bermuda Regiment (RBR) marks “a critical step in the modernisation and transformation of the Regiment to a broad career choice for young Bermudians”. 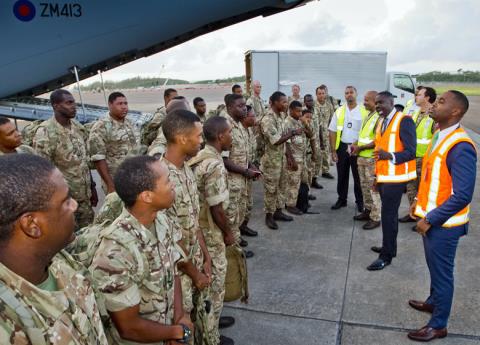 The end goal, he said was to develop a full-time defence force to operate in all areas of security and boost existing resources “as necessary”.

To boost volunteer recruitment, a second recruit camp will be held during the summer, in addition to the boot camp in January.

The Minister also cited $65,000 a year as a potential salary after a two-week training course with specialist training.

He also noted that “the previous OBA administration ended conscription – but left it on the law books in case it was ever needed”.

“This Government is intent on keeping its promises an delivering on them for the people of Bermuda,” said the Minister., who plans to bring the relevant legislation to abolish conscription to the House in the New Year. And the Attorney General’s Chambers “will shortly be requested to draft the necessary amendments” and that he expects “to bring them to the House in the New Year”.

“I will bring the elimination of conscription into force in April 2018 to coincide with the new fiscal year,” said Mr Caines.

As a former officer in the Regiment, who retired as a Captain, he said: “I could not be more proud of the Battalion and the important role it has played in this community.

“Work has already begun to usher in the reality of a Regiment marine unit responsible for inshore maritime patrolling. Our aim is to grow the role of the Regiment by relieving other security services of responsibilities that are more theirs by tradition rather than reflective of their core function.”

The RBR Boat Troop is already responsible for inshore maritime patrols with plans to assume a “core function” in the island’s security services.

While noting that “the Regiment is advertising now for volunteers”, he said: “Volunteering today may be the first step in a challenging and rewarding career in this branch of public service.”