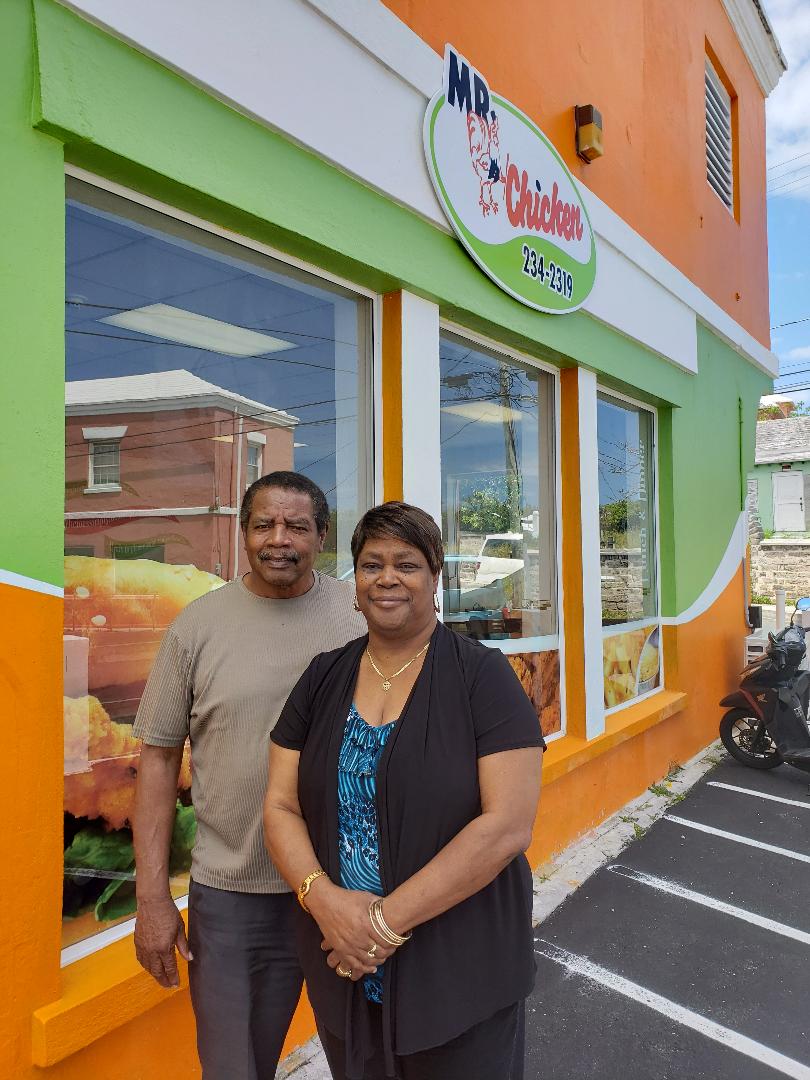 Twelve Bermudians, who all live in Somerset, will be on the job for a soft opening later today, at the new Mr Chicken in Sandys where they are looking to hire at least two more.

For Beryl and David Furbert, opening their fifth restaurant since the first Mr Chicken opened at Heron Bay in 1985, marked the end of an uphill battle that saw a never ending list of hold-ups led by the Planning Department.

Asked how it feels to finally get the go ahead to open, at the small appreciation gathering held at the new facility last evening, they both said all they feel at this point is a sense of relief.

Bermuda Real sat down with Mr Furbert at the new restaurant on Wednesday morning. Asked for his full name he smiled and replied: “David E Furbert and the ‘E’ stands for Everything”. In actual fact, it stands for Eugene.

He went on to say that he is a ‘back-of-town [bie] from Pembroke, and that his wife, Beryl is “actually a Somerset gal, who was formerly a Riley”. They have been married for 45 years and reside in Devonshire.

They have two sons and one daughter and six grandchildren. He recounted how his daughter worked at Mr Chicken as a cashier at the age of ten. He also recalled how one of his son’s literally despised working at the restaurant and more often than not he said: “I left him home.”

The couple purchased the building that used to house Dean’s Bakery and Jamaican Grill in November 2017.

If they opted to leave it as a take-out restaurant he said there would have been very few, if any issues that required permission from the Department of Planning. 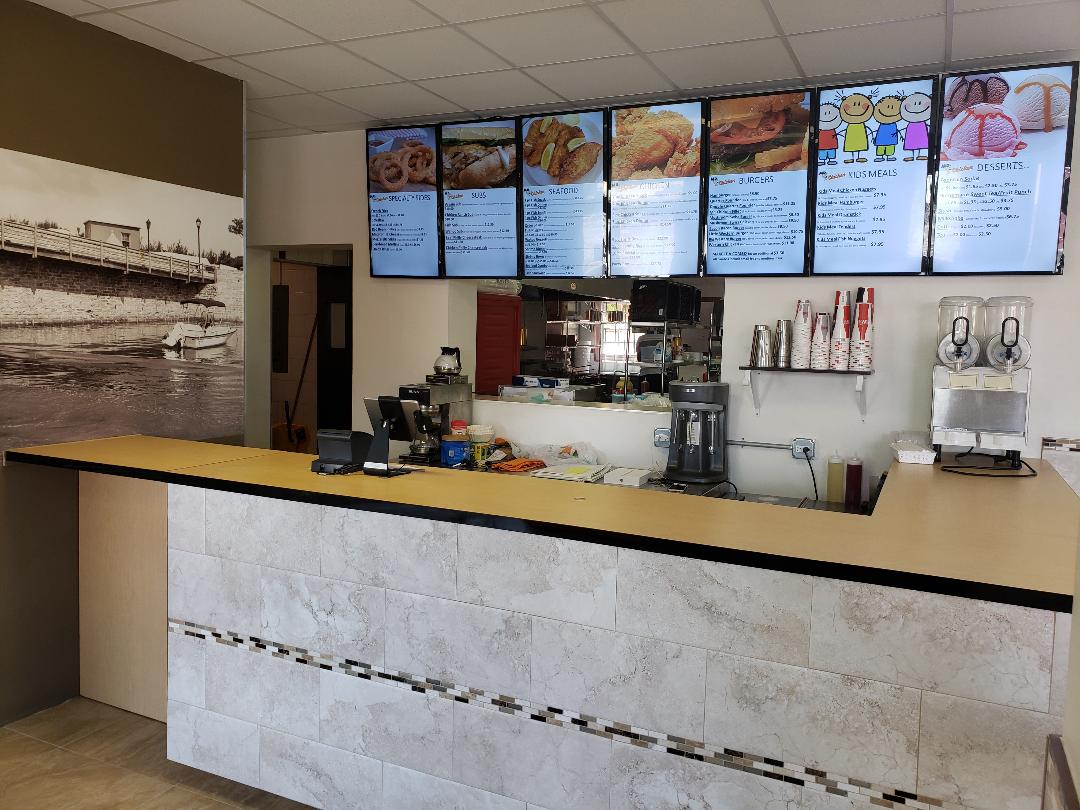 But with all that space, they opted to make it a restaurant with seating.

“One of my sons is an architect, so we had him draw up the plans and applied to change the use of that area,” Mr Furbert said.

“And they treated it like it was a brand new building from there. It was a nightmare!

“Then the Health Department came with an inspector, who said we have to have a bathroom equipped for the disabled. But he put it like I had to do it, which is not the case.

“Then the inspector from the Department of Planning stopped the work in progress because we did not have a permit for the bathroom.

“My son drew up the plan and submitted it that same day and the Planning Department took four months to deal with it,” he added.

Asked what he thinks about the department after all of this, he said: “I think there’s a number of people in the Department of Planning who come across to me as incompetent.”

There was also an issue of no boundary wall alongside the adjacent property owned by the National Trust. To avoid any problems in the future, he said we decided to put a wall up.

Then a number of senior citizens, who walk through that area to avoid that dangerous corner to get to Caesar’s Pharmacy, complained that they no longer have access when the gate is chained. 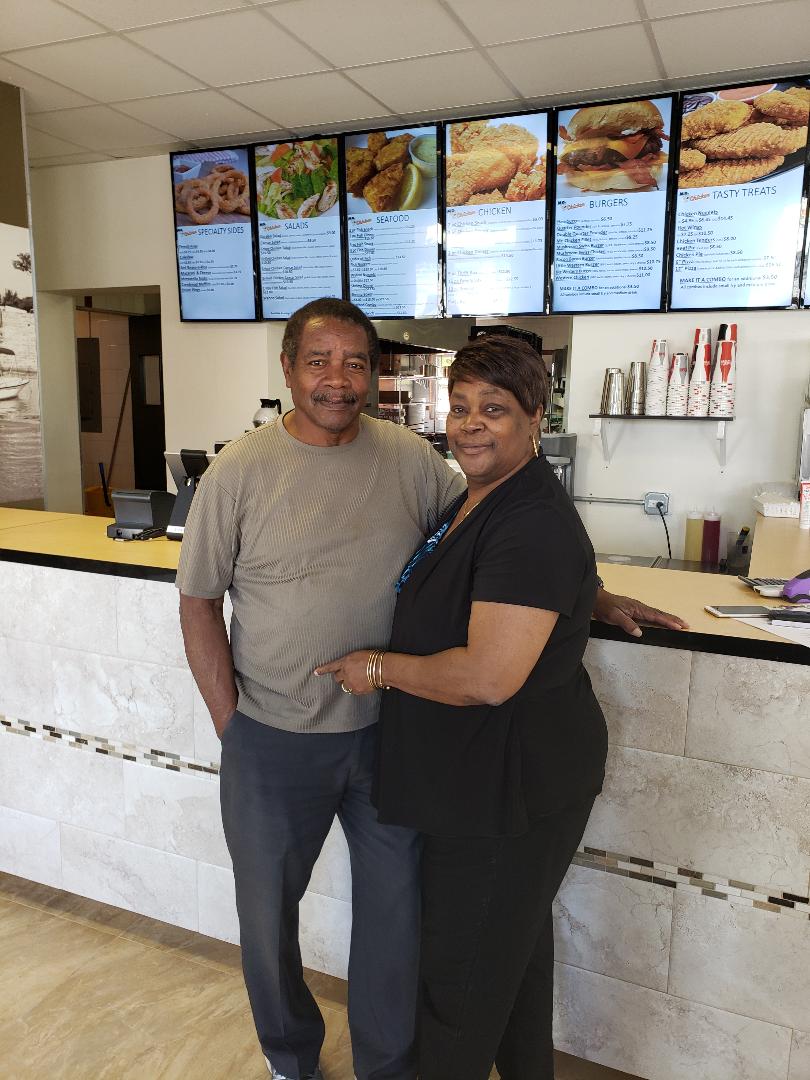 Mr Furbert said he was aware of it and looking to address it because that’s a difficult area for seniors to get around that corner safely.

Since November 2017 up to today, he said he has no excitement left and that this difficult journey left him with “strong, emotional mood swings”.

“I was depressed and told my wife twice that we should just lock the door and leave. She never said ‘no’ and she understood,” Mr Furbert said.

When asked what she told him, Ms Furbert said: “I just said we’ve come this far and that we should finish what we started.”

Mr Furbert noted that both he and his wife were seriously considering selling the business and move out of Bermuda to live abroad.

But he said: “My children talked me out of it and they were right. They were the reason we started this business in the first place and that was in 1985.” 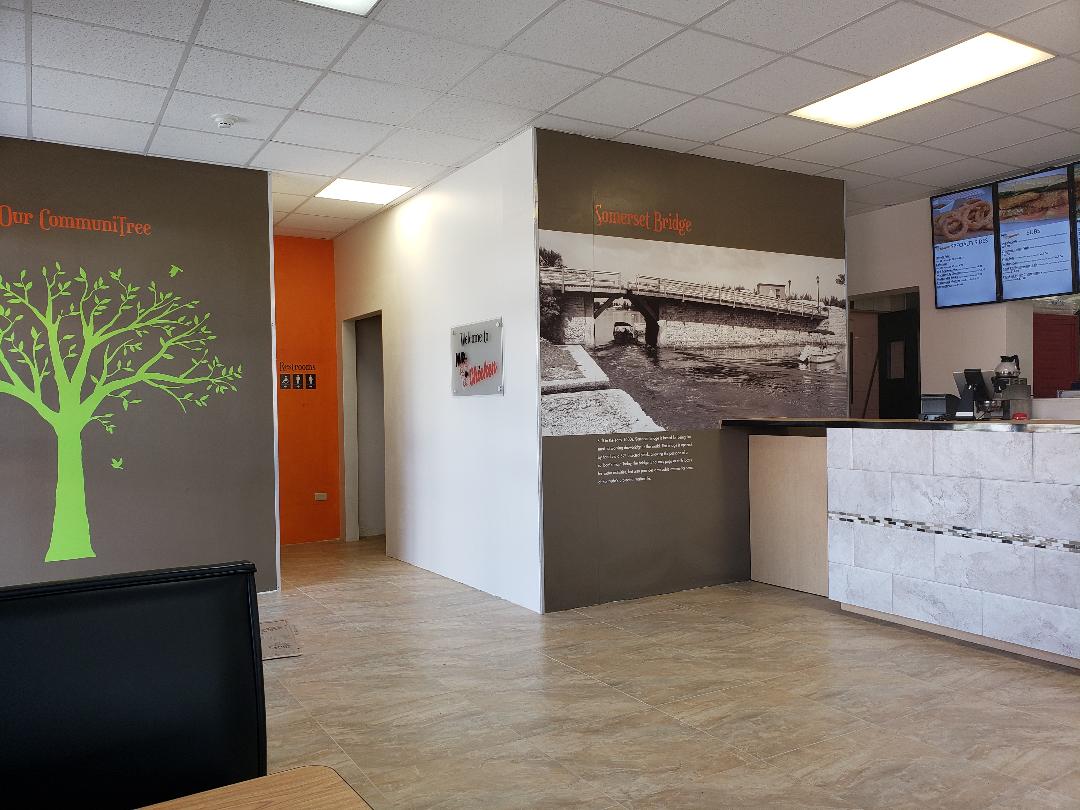 Asked what keeps him sane through all the trials and tribulations and he paused for a minute, then reflected back on his football days and 44 years of coaching.

“I played for Devonshire Colts as a defender and I played on Bermuda’s National Team back in my day.

“As a baller, I played my best games ever against some to the best players and I love the challenge. I also played for North Village when I was around the age of 21, then I moved to Devonshire Colts.”

He also coached footballers for 44 years.

“I stopped coaching about three years ago and really missed it lot for the first two years.”

“I still miss it, but I really missed it bad for about two years, now I think I’m over it. I got over over myself,” he said.

As a youngster, Mr Furbert attended Prospect Primary School and then Howard Academy.

He was also a police officer for about five years. Asked why he left the Bermuda Police Service, he smiled and said: “I told the Commissioner of Police that nights were for sleeping.”

The Commissioner at the time was Frederick ‘Penny’ Bean.

On the eve of the restaurant’s soft opening at 11am today, Mr Furbert said all he feels is relief.

“It’s been so stressful, I just feel relief.”

The official opening is Saturday at 10:45am and there will be treats for the children.

“The building was blessed on Tuesday, by the Reverend Howard Dill and my sister-in-law Grenell Stocks,” he said.

“Our sons will cut the ribbon just before 11am and from then on we’ll be open Monday to Saturday from 11am to 10pm. And we’ll open at 8am on Sundays to serve codfish.”

Asked whether Mr Chicken in Somerset will affect other businesses in the area, he said: “I’ve learned that people have a tendency to attract their own clientele, who will continue to go to their favourite spots.

“We encourage everyone to come in and see for themselves and we will endeavour to make it worth your time.

At 71-years of age, he said: “I look back sometimes and marvel at how we were able to get where we are today.

“We just hired 12 full and part-time employees and they all live in Somerset. Most of them are young people and we need at least two more,” said Mr Furbert.

“In all, we have five restaurants and 52 employees and only nine are non-Bermudians. And I find that my best workers are young Black males contrary to what you hear out there, that’s not true, not to me anyway.

“I think Bermudians stigmatise people, we do it to ourselves a lot and it needs to stop because it’s a myth,” Mr Fubert said.

“I also want to thank Progressive Labour Party MP Derrick Burgess. I’ve already told him personally but I want to say ‘thank you’ publicly for being the only one to get the Department of Planning to move on our project – finally!”