Hard on the heels of the most recent meeting on the thorny issue of obtaining Bermudian status, MOVE has called for the format of the public meetings to be changed to “provide a platform for individuals to stand on their feet and speak for themselves”.

This after a protest nearly shut down the meeting held on Thursday night, by the Immigration Reform Working Group to garner public feedback for their final report on the controversial issue. The findings are due to be presented to Home Affair Minister Walton Brown at the end of October.

The group, chaired by William Madeiros, formed under the One Bermuda Alliance’s proposed Pathways to Status Bill that ignited protest action outside the House of Assembly last year. 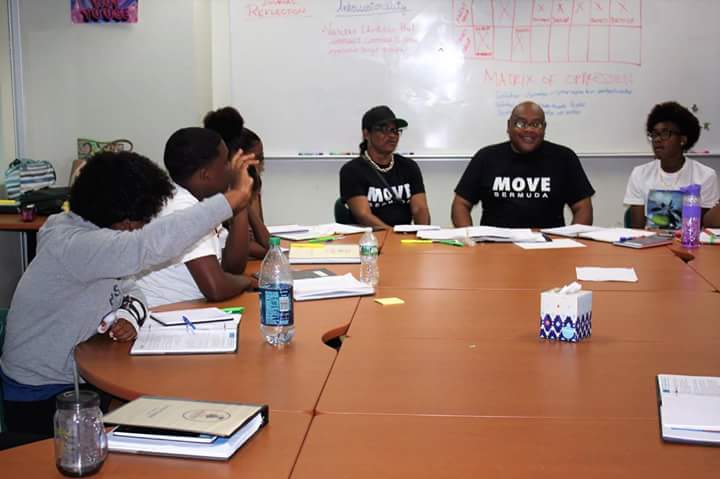 In a statement released to Bermuda Real on Friday, a spokesperson for MOVE said members of the grassroots organization took issue with “the format which required members of the public, attending this extremely important public meeting, to break out into groups”.

“It didn’t provide a platform for individuals to stand on their feet and speak for themselves before the entire gathering and the Government appointed Committee.”

The statement continues: “The question directed to the Chairman by an attendee of what happens with the recordings was totally ignored. The format didn’t allow for a consensus to be garnered regarding matters that truly mattered to those individuals present. One example of this – one individual sitting in a splintered group proposed an immediate moratorium to be placed on the granting of Bermuda Status until the reports have been compiled and a sound decision has been reached.

“That voice was never heard outside of that group. Had that been aired in a public setting at a public meeting comprised of members of the public, then a simple request by the Chairman of the committee for a show of hands favouring that proposal may have been a clear indicator of where folks stood. This is just one of many concerns which were expressed in isolation and never addressed.

“MOVE’s position is, that this was not intended to be a protest and we simply attended to be a part of the change we want to see. However, a couple of our members felt that some information of the previous granting of status should have been indicated under one of the subtitles.

“MOVE feels that a proper format of the meeting should have occurred to enable the proper documentation. What transpired at the start was a result of unanswered questions which may have provided clarity and was reflective more of concerned citizens.”

The meeting, held on Thursday night at Elliott Primary School, ended up in a five-minute time out, before Mr Madeiros advised MOVE members to make their concerns known to the Minister.

BHB: Hospital Visits Put On Hold Due To COVID-19 Surge