One month to the day she was last seen by a close friend at her home over the Easter holiday weekend, senior officers from the Serious Crime Unit provided more details on the disappearance of Chavelle Dillon-Burgess, whose 27th birthday is today.

The young mother, who was last seen on April 11 and has been missing ever since, was not officially reported missing to the police by family and friends until April 30.

Speaking at a news conference on Monday, Acting Superintendant Arthur Glasford and Detective Sergeant Jason Smith, both from the Serious Crime Unit, said the young woman’s case is being treated as suspcious, shrouded by several warning markers raised.

Sgt Smith said: “Some of these indicators are that none of her close associates, friends, have seen or heard from her since April 11, which is uncharacteristic of her.

“She has not seen or cared for her 18-month-old son for over a month, which is also uncharacteristic of her, as he was her pride and joy.

“Her disappearance was not reported until three weeks had passed since the last time she was in communication with anyone.

“This is the first time that Chavelle has gone missing.”

But there were more questions than answers given at that news conference yesterday.

The first question asked was where is the child, who is he with and is he safe?

But he didn’t say who, or whose family exactly. 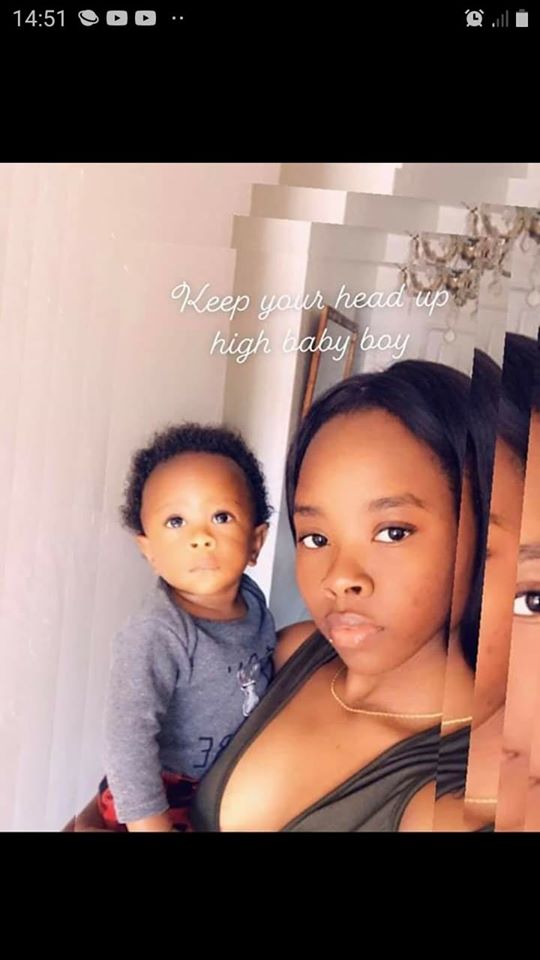 In fact, police have yet to say whether or not the father of the child has been arrested and/or questioned as a person of interest in this suspicious case.

If in fact he is not under arrest, then the question follows – is the child with him, and if so, what are the legal ramifications there?

Officially, no one knows, or, it follows that no one is saying officially, on the record.

Notice that the detective said the child is in “the company” of family and did not use the word ‘custody’.

Whether or not that was intended, legally, there’s a big difference. And whether or not the issue of ‘custody’ is in fact an issue, at this stage of this missing person investigation, again, no one is saying – officially.

Asked whether any arrests have been made, Mr Glasford said: “No one has been arrested in relation to this matter.

“We continue to get information from the general public, which is very helpful and any piece of information that we do get we are treating with urgency and looking into it.”

On the police search conducted at the home of this couple on Friday, he would only say that police executed a warrant – nothing further.

With regards to comments on this case being circulated on social media, he said: “We would rather that doesn’t take place and anybody with any information to forward it straight to the investigators.

“We find that people circulating information on social media gets miscommunication and puts a lot of rumours out there.”

“We deem this suspicious, like Mr Smith said, the characteristics, the warning indicators; we have to look at it more serious now.

“This is uncommon behaviour for a young lady 26, going 27 tomorrow (Tuesday, May 12), she has an 18-month-old son who she normally keeps in contact with, friends and family.

“So because all of this has not happened before and this is the first time she has gone missing for a long period of time like this, we have to treat it a little bit more serious.”

He also stated that police received information on April 30 from her family and friends, who obviously had a concern as they were trying to contact Chavelle and they were not getting any luck.

“So that’s what prompted them to contact police,” he added.

Asked why did it take police so long to look into this matter, Mr Glasford told TNN: “You have to understand with any missing person report we do treat them all with seriousness and we have to make sure that the response is proportionate in what we’re dealing with.

“If any missing person report we make that the response is in proportion to what we’re dealing with.”

Asked if he thought the young woman was still alive, he replied: “The community is remaining very optimistic and we will do the same.

“We hope that we can find Chavelle alive and well and like I said the community is putting their all into it.

“We have people yesterday (Sunday), who gave up their Mother’s Day to be out there searching for Chavelle.

“So we will remain optimistic with them.”

It was also noted that police acted as soon as they received the report that she was missing on April 30. Those who contacted police said she was missing since April 11.

Mr Glasford stated that she was last seen by a close friend at her home over the Easter holiday weekend.

“We haven’t received any other further information, so that was the last sighting of her – around Easter weekend.”

Mr Glasford noted that not with her baby on Mother’s Day and that people gave up their Mother’s Day to search for Chavelle on Sunday.

The inquiry prompted public support with “several hundred” residents volunteering their time to find her.

Mr Smith noted that the search parties had covered “just about 95 percent of the island to date, without success”.

“When considering all of these points it is the view of the investigating team that her disappearance should be treated as suspicious,” he said.

He also urged members of the public to report any sightings of this young woman, particularly since April 1.

“We are also encouraging friends of Chavelle who have not made contact with the investigating team to do so now.

“You may have information that is invaluable to the investigating team that you may not be aware of,” he added.

Today is her birthday and on this day in particular, he said: “Let us as a community unite to bring her home to her son and her family.

“”Mother’s Day has passed and Chavelle unfortunately Chavelle did not celebrate this day with her eighteen-month old son, Kamal Jr.”

He also thanked the community and Antonio Belvedere in particular, for coordinating search efforts.

“When the community in its Goliath strength coupled with the resources of the BPS working together we can bring closure to the family and friends of Chavelle,” said Mr Smith.

“The BPS, with the assistance of you the public, will not stop working until Chavelle is found and reunited with her family and friends.”

Anyone with information was asked to contact Detective Sergeant Jason Smith on 717-0864 or by e-mail at jsmith2@bps.bm.